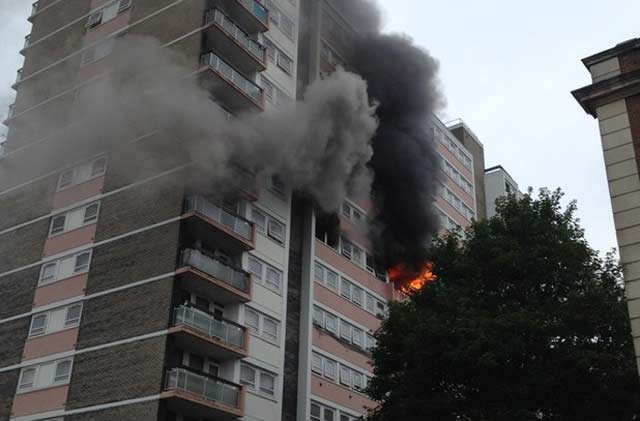 Shortly before 1am this morning, a fire broke out on the second floor of Grenfell Tower, a block of council flats in the London Borough of Kensington & Chelsea. The blaze rapidly became a towering inferno as it engulfed all 24 floors of the block, taking 200 firefighters and 40 fire engines more than seven hours to extinguish.

At the time of writing it has been confirmed that at least 12 people have died as a result of the blaze while dozens more residents are being treated for injuries, many of them life threatening.

Local activists have warned for years that the building was a death-trap, but neither the landlord, Kensington and Chelsea Tenants Management Organisation (KCTMO), nor the Conservative government (both of whom knew of the dangers) took any heed. The blood of the victims is in on their hands.

Reports from the fire describe hellish scenes of residents pleading for help and flashing phone torches in upper-storey windows, holding children out of windows, and even jumping to escape the flames as emergency workers desperately battled to rescue those trapped inside. This was an avertable catastrophe that implicates KCTMO, the local Tory council, and the government, all of whom have displayed a callous lack of concern for the lives of working people and have therefore allowed this tragedy to occur.

In an article published in November last year, tenants activist organisation the Grenfell Action Group chillingly stated their firm belief that “only a catastrophic event will expose the ineptitude and incompetence of our landlord, the KCTMO, and bring an end to the dangerous living conditions and neglect of health and safety legislation that they inflict upon their tenants and leaseholders.” Tragically, their premonition has now come to pass.

KCTMO is an ‘Arm’s Length Management Organisation’, a supposedly not-for-profit company entrusted to manage council houses. They were dreamt up in 2000 as part of the Blair government's strategy for privatisation. In the intervening years they have become notorious amongst tenants for poor maintenance and profiteering. Without any democratic control by tenants, these companies waste millions on consultants, lawyers, offices and big salaries for top managers while the homes they ‘manage’ rot without proper maintenance.

The Grenfell Action Group have condemned KCTMO as an “evil, unprincipled, mini-mafia who have no business to be charged with the responsibility of looking after the everyday management of large scale social housing estates”. The group allege that they alerted both the borough council and KCTMO of serious fire safety issues at Grenfell Tower on multiple occasions over the past several years.

A similar disaster ware barely averted in 2013 after several terrifying power surges alerted residents to a serious problem resulting from shoddy wiring. However, not only did the KCTMO not treat this incident as a wake-up call and invest in repair and maintenance of their properties, but attempted to cover up the seriousness of the issue with the help of the Kensington council, who apparently “refused to investigate the legitimate concerns of tenants and leaseholders.”

Appallingly, the Conservative government has been repeatedly warned about the ticking time bomb that is the risk of fires in tower blocks. Although a fire on this scale is unprecedented in recent British history, this incident is eerily reminiscent of a similar blaze at a council block in 2009 and raises serious questions as to how it could be allowed to happen again. In 2009 a fire at the Southwark council owned Lakanal House, resulting from an electric fault, claimed the lives of six residents. The inquest into the incident found that Southwark Council had failed to carry out a proper fire inspection of the building that would have identified a series of major fire risks. It also recommended that similar at-risk blocks be fitted with emergency sprinkler systems.

These recommendations were taken up by the All-Party Parliamentary Group on Fire Safety, chaired by Labour MP and former firefighter Jim Fitzpatrick, which called for full review of building regulations on fire safety and the installation of fire suppression systems and sprinklers in 4,000 similar tower blocks across the country. The government proceeded to sit on these recommendations and do precisely nothing for four years. Last year the then Housing Minister, Gavin Barwell (who lost his Croydon seat in the election), faced renewed calls to urgently tackle the issue but did nothing. While working class families have lost their lives as a result of this inaction, Barwell has been handsomely rewarded with an appointment as Theresa May’s Chief of Staff.

Murder by the ruling class

Even in Britain, capitalism has consistently failed to provide a decent standard of housing for working people. Tragedies like the Grenfell fire are a direct result. Despite being the world's fifth largest economy the standards of much of Britain’s housing remains appalling. In 2015 a fifth of all homes failed to meet basic decency standards, with the worst offenders being private landlords. Astoundingly private Landlords don’t even have a legal obligation to make their homes “fit for human habitation”. An attempt by Corbyn’s Labour to introduce such a law last year was voted down by the Tories as “unnecessary regulation”. 72 of the MPs that voted against the legislation were themselves landlords, making it explicit that they were simply acting to maintain their own parasitic profits.

Grenfell tower stands (or used to stand) a stone’s throw away from luxurious multi-million pound properties, many of which lay empty as mere investments for the world’s super-rich. Such is the insanity and brutality of capitalism: working people are crammed into tiny flats where they are literally burnt alive while the capitalist class enjoys unmitigated luxury. Make no mistake: this tragedy was no accident - it was murder by the ruling class in the form of the Tory government and local council.