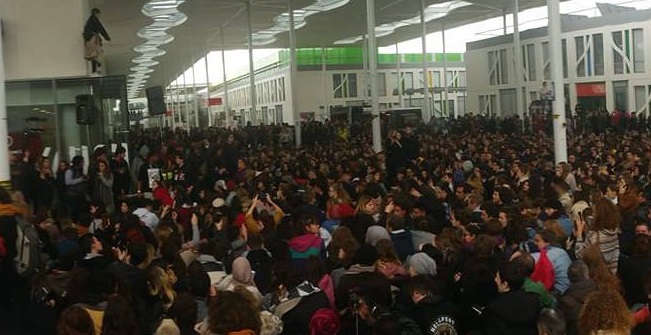 The following motion has been passed by student members of Révolution (the IMT in France) at a general assembly at l'université Paul-Valéry-Montpellier. It has also be raised at a student assembly in Toulouse (to be voted on today), and will be raised in Nanterre and Lyon. It states support for the yellow vest movement, and calls for a campaign of strikes to overthrow the hated Macron government.

"The General Assembly expresses its support for the yellow vest movement and for all workers, and school and university students who have mobilised to fight Macron’s anti-working-class policies.

“It is no longer a question of fighting this or that individual attack on the working class, henceforth we must fight against the totality of government policy. This government is no longer legitimate. We must overthrow it.

“In order to achieve this, the trade union movement must put a 24-hour general strike on the agenda, as a starting point for a wide movement of unlimited strike action."

Video of one of our comrades presenting the same motion in Toulouse: