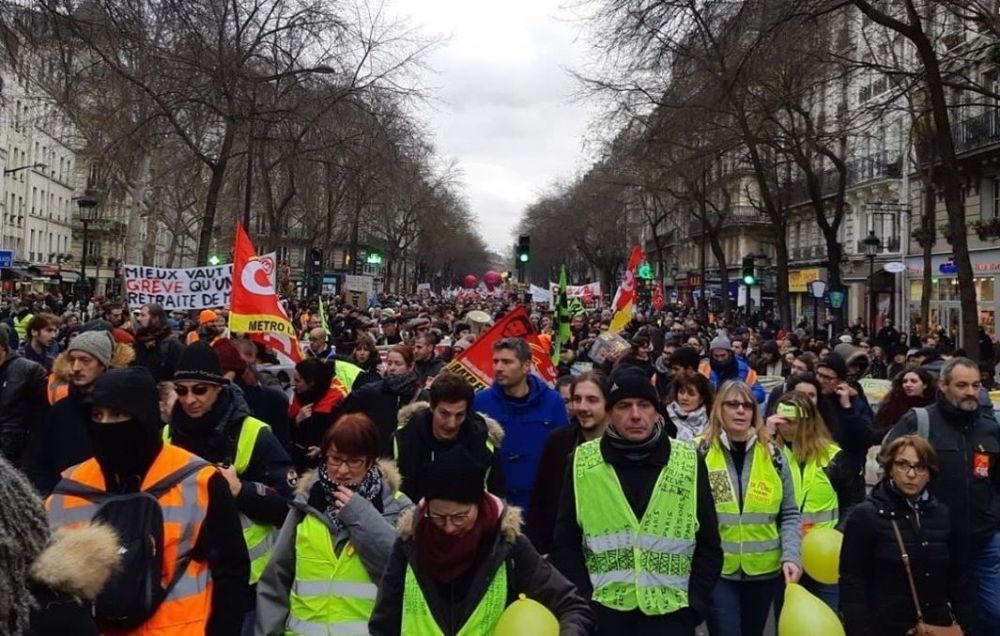 President Macron’s dreams of a peaceful Christmas were dashed as striking workers rejected his plea for a holiday truce, during what has become the longest continuous strike in 30 years – longer than the victorious struggle of 1995.

In the spirit of peace and goodwill to all men, Macron urged union activists to consider the plight of families whose Christmas plans faced disruption in the continuing battle over his counter-reform to pensions. But this festive appeal rang hollow given that public support for the strike has actually increased. As one commuter (who arrived in Paris from Valenciennes in the north of France a week late for the holidays) put it: “[t]he government is trying to rob [the workers]... so they have to show that they’re not sheep. Of course, it’s inconveniencing us, but I support their right to strike.”

Tis the season to be striking

In the days leading up to Christmas, representatives from France’s main unions entered into negotiations with the government – against the will of activists in the streets, who understand Macron will never budge, and who want nothing less than a total reversal of the pension reform, along with the fall of the government.

The more militant unions, led by the CGT, emerged from the talks on 20 December with a statement that the government had (predictably) not given enough ground, meaning talks would be stopped until 7 January. The statement called for a fourth inter-professional strike on 9 January, and promised a number of actions in the lead up, including a strike by casino workers on 21 December, a shutdown of French ports on 30 December from 11am to 3pm, and the continuation of the all-out transport strikes.

Setting the date of 9 January for the next general strike is a source of great frustration to activists, as it offers Macron a three-week reprieve. However, French workers have organised locally and spontaneously to keep up the pressure on the government, despite a total lack of direction or organisation from their official leadership.

On several occasions, CGT-affiliated workers from France’s main electricity grid (RTE) have hit large sections of the country with blackouts, in a very clear demonstration of the power of the working class. On 22 December, Amazon deliveries were affected by cuts to the Blanc-Mesnil site on the outskirts of Paris. However, a local representative from the union tweeted assurance that power would be restored to poor families, and promised to enact off-peak tariffs for people struggling to pay, vowing: “there will be no candlelight Christmas for the poor.”

Meanwhile, hundreds of petrol stations have run dry after several privately-owned oil refineries were shut down by striking workers. Following the breakdown of negotiations between the union leaders and the government, general assemblies of workers at refineries in Grandpuits-Bailly-Carrois, Lavéra, La Mède and Feyzin voted for complete stoppages – effectively cutting fuel production in the country in half. Many fuel depots and ports are also on strike or operating a limited service, which has further hampered the fuel supply chain. The general assemblies of petroleum workers were very militant, with speeches that went far further than just denouncing the pension reform, to attack the very heart of Macron’s reactionary policy.

During the last interprofessional strike on 17 December, performers from the Paris Opéra serenaded the streets. On Christmas Eve, dancers from the Paris Ballet delivered a free, open-air performance of Swan Lake to members of the public. The physically taxing careers of ballet dancers (who are often affected by chronic conditions like tendonitis at a young age) are compensated with early retirement: an arrangement that will be scrapped if Macron’s plan is seen through. As the dancers swooped and twirled to Tchaichovsky’s superlative score on Tuesday, banners hung behind them emblazoned with the slogans: “Paris Opera on strike” and “Culture is in Danger.”

France's strike vs. austerity is bringing art back into the streets.🌹pic.twitter.com/lRuw6faCRN

The transport workers at the forefront of the struggle remain on strike, and public transport across France remains highly disrupted. Only about 60 percent of high speed TGV services are running, along with 70 percent of budget Ouigo routes, a third of Intercité trains, a fifth of Transilien services, 40 percent of local TER services, 60 percent of Parisian bus services, and just two Paris Metro lines (both of which are automated). So far, the strikes have cost SNCF about €400m in revenue. The Eurostar has also been hit by cancellations.

On Boxing Day, an unofficial demonstration was held by a few hundred RATP and SNCF workers in Paris, joined by a contingent of striking teachers and yellow vests. A similar action was organised by CGT, FO, FSU and Solidaire activists in Nantes. As would be expected, the turnout in both cases was considerably smaller than the official strikes and days of action organised by the main unions. In general, for transport workers – the main pillar of the strike – evidence of fatigue is becoming apparent.

On 23 December, strike penetration for SNCF workers dropped below 50 percent for the first time since the action began, down from 85 percent on 5 December. The Christmas pinch (combined with a lack of any clear plan for escalation from the union tops) has led a trickle of strikers to return to work. Transport workers are currently losing between 120 and 100 Euros a day: with the government digging its heels in, and lacking clear and bold leadership, some are losing heart.

Repression is also beginning to take its toll. For instance, on 23 December, an impromptu protest by hundreds of unionists at the ticket barriers in Gare de Lyon in Paris was viciously attacked by riot police. Similarly, education workers and youth have endured a ramping up of state violence. On 20 December, CGT-affiliated education workers issued a statement of condemnation after teachers and student protesters in Paris were gassed and beaten by the police, while peacefully blocking the entrance of their schools. This kind of brutality can drive the masses forward, but without strong leadership and a firm plan, it can also sap their energy, as we witnessed in the twilight of the gilets jaunes.

Conversely, many workers feel they have reached a point of no return, and must now fight to the bitter end. “This is a turning point,” cheminot Raffi Kaya told AFP at Gare de Lyon. "It is starting to hurt financially. But we have gone too far to stop now." Moreover, despite some evidence of wavering, the morale of transport workers is being maintained by high levels of public support and solidarity, notwithstanding the inconvenience of disrupted travel over Christmas.

What is happening in France?

Striking transport workers sing and chant as they take over Gare de Lyon in #Paris.#Greve23decembre pic.twitter.com/4hXEa98VsR

It is clear that Macron’s attempts to turn the French masses against the strike are foundering. A recent poll found that public support for the strike has actually increased a couple of percentage points from the start of the conflict, to 62 percent. Another poll suggests that 57 percent of the public oppose the pension reform, compared to 49 percent on 12 December; while 46 percent said Macron and the government were mostly responsible for the current dispute, compared to 26 percent who blamed the unions. In a very concrete demonstration of support and solidarity, a union fighting fund has so far received €1.3m from public donations to compensate workers for lost wages.

Macron has had more luck convincing the union tops to betray their base. For instance, the government entered into separate negotiations with the main unions representing air transport workers, offering to preserve their complementary pension fund (the CRPN) and a retirement age of 60. This led the SNPNC, UNPNC, Unac and Unsa PNC to suspend their call to strike until further notice. SNGAF, the main union representing cabin crews, is holding firm, while SNPL (which represents the majority of unionised pilots) said it would suspend its call to strike on 3 January on the condition that guarantees on the aforementioned concessions are confirmed.

Alongside wearing the strikers down through attrition, this has been Macron’s strategy from the start; to break up the united front of transport workers by offering minor concessions to different sectors. This divide-and-rule ploy can only be resisted from below, with rank-and-file activists pointing out to their class brothers and sisters that this fight is about more than pensions – it is a fight against the rotten capitalist system itself, and its representatives in Macron’s administration.

In some instances, grassroots activists have resisted attempts by the tops to demobilise them. On 19 December, the government signalled it was willing to “compromise” over the retirement age, along with the widely-condemned “pivot age” wherein workers can officially retire at 62, but cannot claim their full pension until they are 64. However, Macron; Prime Minister Édouard Philippe; and pensions chief Laurent Pietraszewski are implacably opposed to retaining the special pension regimes for public sector workers.

Nevertheless, this “progress” over the retirement age was enough to convince the leaders of the more moderate CFTD and UNSA unions to call for a “pause” in their strikes over the holidays, arguing that the Christmas period is “not a good time to continue a movement” – despite popular support from the public. The tops further covered their backsides by claiming that workers were “worried about their cash” and needed time to “recharge their batteries.”

This manoeuvre was met with outrage by rank-and-file activists. Railway workers affiliated to the CFDT and UNSA decided to continue striking in defiance of their leadership. Cross-sector solidarity has also continued to develop. A general assembly at Gare du Nord in Paris – attended by drivers, retail workers and switchpost operators – voted unanimously to press on. Such resolve from members of less-militant unions is a very promising sign, and evidence of the experience they have gained over the course of this struggle, in addition to the bitter lessons of their leaderships’ wrecking behaviour over many years.

The last four weeks have seen one of the most powerful strike movements in France’s history. Despite the limitations of their vacillating leadership, the working class has kept up the fight over the holiday period. They have also kept the majority of the public on side. The next interprofessional strike will be decisive. Its success, and that of the movement as a whole, will depend on rank-and-file workers’ ability to build on the bonds of solidarity and bodies of struggle that have arisen in this fight – to continue to make headway amongst new layers of private sector workers, and turn this battle against Macron’s pension reform into a final confrontation with the government itself.

Total victory, or final defeat: there will be no half measures.