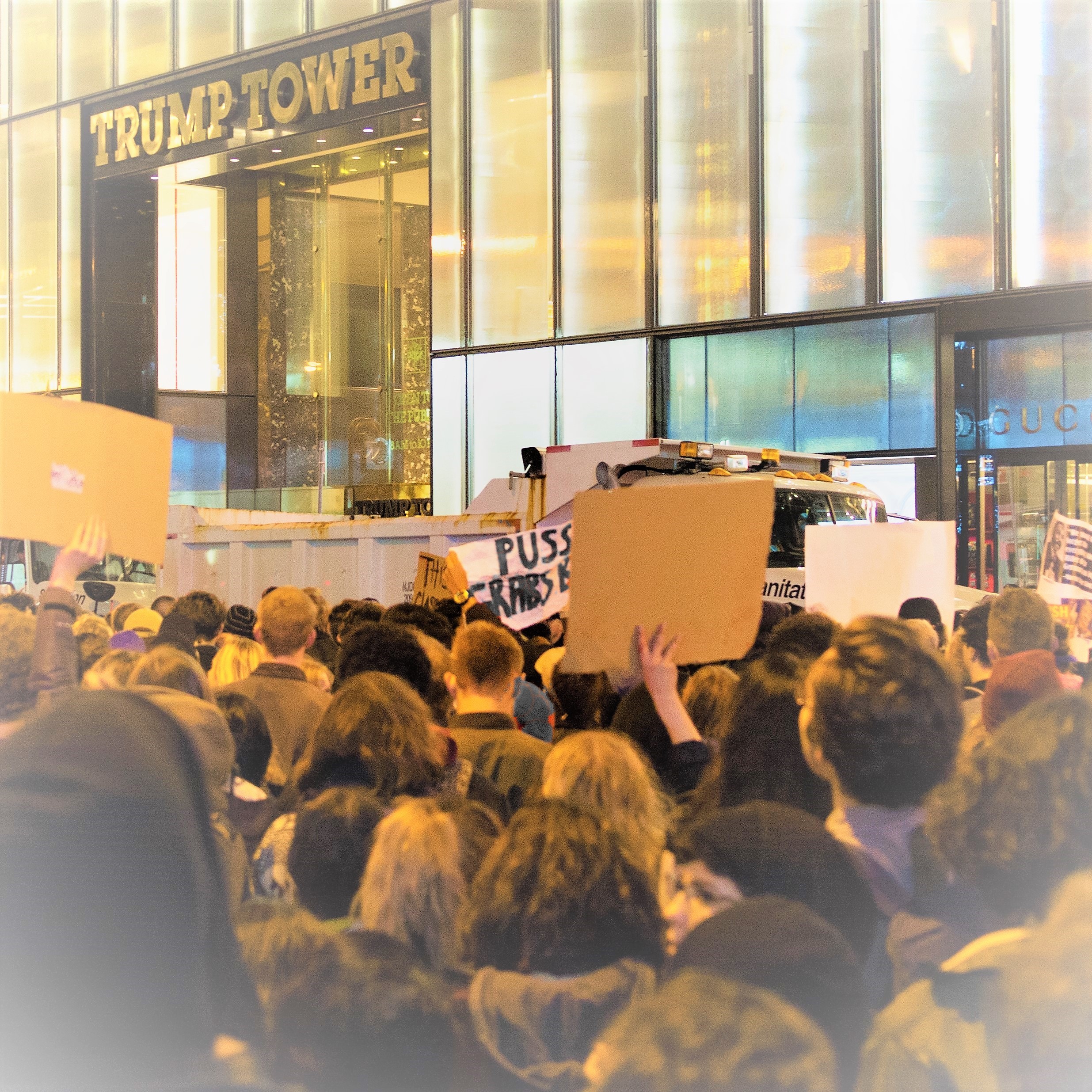 The massive wave of defiance against Donald Trump’s election shows that millions of youth and workers will resist his government. Trump cannot resolve the crisis of capitalism and the poverty, bigotry, and instability that come with it. The Democrats and labor leaders have rolled over and offered to work with him. The International Marxist Tendency (IMT) has a different perspective. We are confident that Trump’s anti-worker agenda can be stopped in its tracks. This is our proposal for a program to fight and beat Trump.

[This is the text of a leaflet distributed by the US Marxist organisaion, Workers' International League. Download the PDF version of the leaflet here]

Donald Trump has no mandate for his policies!

Less than 25% of the voting-age population voted for Trump and he is the most unpopular incoming president since records began after WWII. Trump even received fewer popular votes than Hillary Clinton—yet he will be the president. We offer zero support to either of these big-business candidates and parties, but it is clear that the Electoral College is an undemocratic violation of the basic principle of “one person, one vote” and should be abolished!

The labor movement must organize and mobilize against any and all racist or bigoted attacks against anyone living in this country. This poison is used to “divide and rule” us, and we cannot allow it to cut across our bonds of solidarity. Unemployment is not caused by immigrants—either legal or “illegal.”  It is caused by capitalists laying off workers and shutting down workplaces, while they sit on piles of money and speculate on the stock market. The working class is international, and we stand in solidarity with workers of all countries. We have no common interests with the richest 1% who exploit and oppress us all. US workers have more in common with Mexican or Chinese workers than we do with Donald Trump. We demand immediate and unconditional legalization and equal rights and protections for everyone living and working here!

No to austerity! Make the capitalists pay for their crisis!

No to bailouts for bankers, corporate welfare, and imperialist war. The infrastructure of the US is falling apart. The only solution is a massive program of useful public works with union pay and protections. Unemployment could be eliminated and everyone’s quality of life improved as we build and repair bridges, tunnels, roads, parks, recreation and entertainment centers, passenger and freight trains, canals, public transportation, hospitals, schools, and housing. Union hiring halls should be immediately set up in all areas of high unemployment. On the basis of the technology and productivity humanity has developed over thousands of years, there is no reason to work so hard for so little. A $25 minimum wage and a 30-hour workweek for 40 hours pay must be introduced immediately. With CEOs making millions, nobody should be paid less than $1,000 per week!

Nothing can stop the power of the united working class!

American workers have tremendous potential power. Through workplace occupations, strikes, and general strikes we can cut off the flow of profits by withholding our labor to stop manufacturing, construction, transportation, communications, and services.  To coordinate this on a national scale we need organization and a leadership willing to fight against the bosses to the end. The unions must launch a militant fightback and campaign to organize the unorganized. Nothing inspires confidence like success! With a bold lead and some inspiring victories, the decades-long decline of organized labor can be turned around. But the present labor leaders support capitalism and have refused to mobilize the power of the workers against it. We must build a militant socialist opposition in the labor movement—a new leadership that has confidence in the working class and its ability to run society democratically. Millennial youth identify as “working class” more than any other layer of the population and have plenty of energy to take the fight to the bosses and their political parties. The youth are the future!

For a mass socialist party of the working class!

The Democratic Party is no friend of the workers and has led us to the present situation. Enough is enough—it’s time to break with both parties of big business! We need our own party to collectively fight for our interests. The program and leadership of such a party would be democratically determined by the membership, with no elected official making more than the workers they represent. A workers’ party with workers’ leaders would turn American politics upside down!

The Fortune 500 accounts for 75% of the country’s GDP—just .0017% of the companies operating in the US. These companies affect billions of lives around the planet and are too important to remain in private, profit-driven hands. If we want economic stability and better quality of life for all, these companies must be nationalized and integrated into a rationally planned and democratically administered economy, run in the interests of the majority. To accomplish this we need a workers’ government and socialism—a society in which the wealth we collectively produce is collectively used to meet everyone’s needs—not only the rich. Only socialism can provide high-quality, universal health care, education, housing, and infrastructure, and lay the foundations for fighting the roots of racism and discrimination: the artificial scarcity produced by capitalism and its relentless pursuit of profit. Only socialism can address the accelerating climate crisis that threatens to make the planet uninhabitable for the human species. Socialism is democratic and international, or it is nothing!

Protests are an important starting point, but it will take much more to change society. The IMT is active in over 40 countries, is building branches around the US, and we need your help! One individual may be limited in what they can accomplish, but working together, we can grow stronger and do much more: the whole is greater than the sum of its parts! As we establish roots and connections in every union, workplace, neighborhood, and campus, we will eventually be in a position to have a decisive effect on the course of history. Marxism is a guide to revolutionary action and this is why we need to put in the work of studying theory, history, and current events while intervening actively in the movement. None of this will be easy or come overnight, but it is the only way forward for humanity. If you agree with us, there’s no time to waste and no better time to get involved!

Only socialism beats Trump!
Join the IMT and the struggle for a better world!