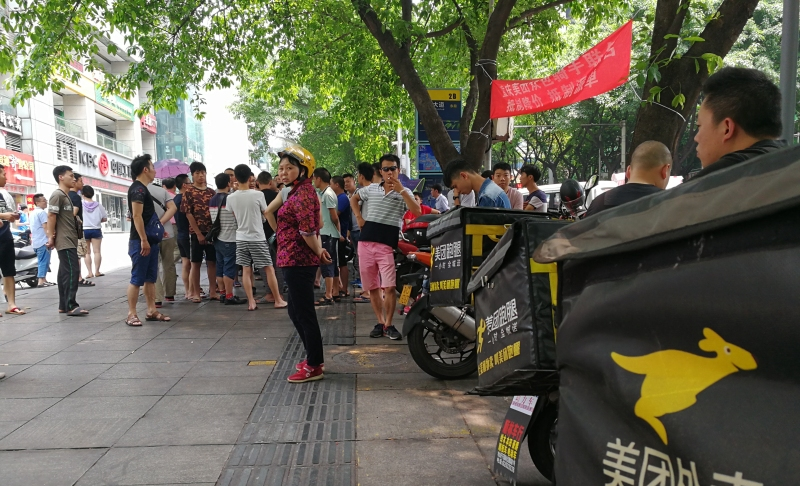 As the Chinese Communist Party acts more confidently on the international stage than ever before, the Chinese working class is starting to chafe against the harsh realities of capitalism. Since May, there have been three high-profile, cross-country strikes started by crane operators, fast food delivery workers, and most recently truckers. Although the strikes were small in relation to the general working class, the workers’ ability to organize across several major cities indicates that a layer of the Chinese working class is being pushed into struggle.

According to China Labor Bulletin, since Friday 8 June more than a dozen locations in Shandong, Chongqing, Anhui, Guizhou, Jiangxi, Shanghai, Huberi, Henan, and Zhejiang saw brigades of truck drivers drape their vehicles with slogans protesting rising fuel prices and tolls, and delaying of wage payments. They were also objecting to the online platform Yun Man Man, the website where they find contacts, which is implementing an app that prevents customers from directly contacting truckers and allows comparison between them, effectively pitting truckers against one another for lower prices.

The cross-country action was preceded by an anonymous appeal to “30 million truckers” across China to strike. Thus far it would seem that this large-scale organizing effort was conducted via online communities of Kayou (“trucker friends”) through which fellow truckers can socialize. The fact that this action was able to take off simultaneously across many cities, despite the CCP regime’s complete control over social media, speaks to the ingenuity and efficiency of the striking truckers. So far there have been no reports on this matter from any legal Chinese media, and any online discussion has been swiftly removed. This might be because the strikes in some cities have become highly militant against the CCP. One group of truckers refer to themselves as the Wagangzhai Alliance, a reference to the rebels that rose up against a tyrannical emperor at the end of the Sui Dynasty. There is even a video showing a strike where drivers chanted “defeat the CCP!”

The truckers’ actions were preceded by a food delivery workers’ strike that took place in early May, which also happened across the whole of China in Shandong, Zhejiang, Chongqing, Shanghai, Guangdong, Jilin, Hunan, Guangxi, and Shanxi. These workers rely on food delivery tech giant Meituan for jobs in the same way that GrubHub or Seamless assigns jobs to delivery workers in the West. While Meituan is currently valued at $40bn, the food delivery workers toil in deplorable and stressful conditions, while having to accept lowering pay and absorbing the cost of fuel, phone, and vehicle repairs themselves.

An important theme becomes apparent when comparing the conditions of the food delivery workers and the truckers. The proliferation of gig economy apps and services has turned many of these jobs into independent contracting positions, pitting workers against each other for contracts and income, all the while companies like Meituan or ride-sharing company DiDi see their profits soar. Xi claims that China is a socialist country governed by the alliance of the proletariat and the peasantry, but in reality the capitalist system in China is driving more and more workers into precarious conditions for more profit in a manner familiar to the Western working class.

Around the time that the food delivery workers launched their strike, the crane operators in construction sites in Guangxi, Jiangsu, Henan, Jiangxi, and Fujian went on strike on May Day. Aside from demanding better pay, safer conditions, and eight hour days for themselves, the crane workers reportedly demanded the same for their fellow construction workers. The strike’s high profile compelled state-run media Global Times to run a piece acknowledging the movement’s existence and the demands of the workers.

A new phase for the Chinese labour movement?

The aforementioned cross-country strikes that took place in rapid succession underline an important trend in the Chinese workers’ movement. Since the restoration of capitalism, as directed by the CCP, and the rapid growth of the economy, China has in fact seen magnificent (yet localized) actions, such as the Wukan Village uprising in 2011 and the Shuangyashan Miners’ protest of 2016. In between there are often strikes in individual factories, and occasionally within a particular city. 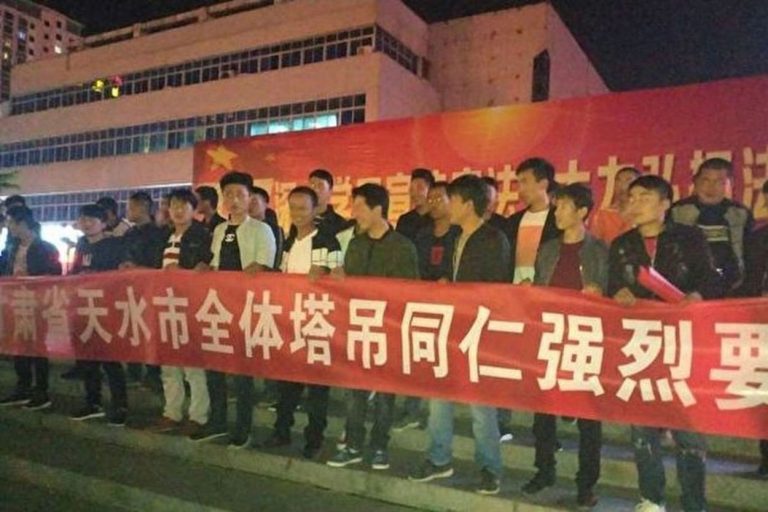 The idea of extending struggles across the country seems to be catching on / Image: UDN

A watershed occured betwen June and July of 2016, where Walmart workers in many locations across China reacted to a new work hour regime the management imposed on them by organizing for a nationwide strike. Although the movement ended with the workers not being able to maintain their organization due to internal problems and pressure from the CCP, in tandem with Walmart, the idea of extending struggles across the country seems to be catching on.

The successful launch of the latest three strikes across vast geographical distances may suggest the workers have found a way to organize these actions online while avoiding state surveillance.

The CCP feeling the pressure

The rise of working-class militancy in China is no surprise for Marxists. The natural tendencies of capitalism ultimately enlarge the size of the proletariat and creates conditions that motivate them to fight the system. Even in China, which has cutting-edge surveillance and censorship, class struggle cannot be avoided.

To an extent the CCP, following a Stalinist tradition, understands the eventual arrival of class struggle. The sharp increase of crackdowns against dissidents, the rapid development of surveillance technologies, and Xi’s campaign to centralize power via the new National Supervision Commission on all levels of the government are measures to boost the state’s ability to fight against mass movements should they arise. This is not a sign of strength, but evidence of fear.

This anxiety was expressed as a recruitment drive conducted by the All Chinese Federation of Trade Unions (ACFTU) on 10 April. The ACFTU is operated and controlled by the CCP. In this way the CCP put up a facade of representing the workers while at the same time diverting any radicalising ferment into acceptable channels.

The irony with this unionization drive was that truck drivers were a key target for recruitment, but evidently the workers still felt that they had to take matters into their own hands. This is the common fate of the Chinese working class in the era of global capitalist crisis. When these workers finally move, they will shake the earth.