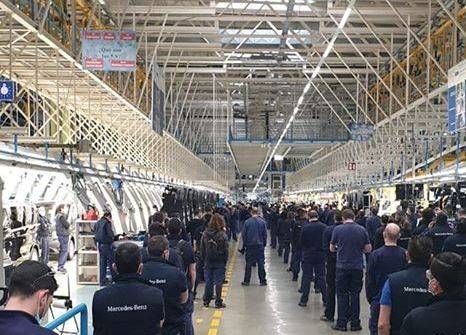 The following statement shows how workers in Spain, who are striking in protest at the bosses’ refusal to take adequate safety measures in light of the coronavirus pandemic, are setting an example to the whole world. No to unsafe working conditions! Make the bosses pay!

Faced with the submission of governments to the bosses, only the working class can guarantee an effective fight against the COVID-19 pandemic. The Mercedes workers in Vitoria; IVECO in Valladolid; the construction workers of the Amazon warehouses in Dos Hermanas, Balay, Aernova, Continental... stand firm in the face of the lack of preventative measures to stop the spread of the virus in their workplaces. These Spanish workers are leading the way!

The central and regional autonomous governments and the media never tire of repeating that, to stop the contagion, we all have to act responsibly and stay at home. Furthermore, after the declaration of the state of alarm, they warned that the police forces and army will impose the necessary coercive measures. They threaten the imposition of fines and penalties for individual cases of indiscipline. But all their appeals to responsibility stop at the impassable wall of sacrosanct private property. The orders don't apply to the owners of capital. The same measures of isolation that hour after hour are advertised by the big media outlets - which those same monopolies own and control - are sacrificed on the altar of profit, stopping short at the gates of the factories and workplaces. Every day that passes, millions of workers face uncertainty. They either have to decide what is more important: their health, or their living conditions and employment.

There is a clear need for accurate information, but no intelligent commentator or figure of authority dares to explain the harsh reality of the health risks, nor that the future of millions of employees is dictated by 100 oligarch families. These are the same people who sit on the IBEX boards of directors and who, without answering to anyone, do not hesitate to sacrifice the health of their employees to maintain their profits. And in the cases where they cannot maintain their businesses, they are already pulling the strings of power, and tomorrow will place the entire cost of this crisis on our shoulders.

Yesterday, (Monday 17 March), from the start of the morning shift, in the production line of Mercedes Vitoria - the largest industrial plant in the Basque Country, with 5,000 workers on staff and another 12,000 in auxiliary roles - the tension was gnawing away. Anxiety gripped the workers. Everyone had on their minds the hypocritical inconsistency on the radio and TV, in which people were repeatedly told to stay at home to stop the contagion, yet they were forced to work, in breach of any of the basic security measures, thus putting their health and that of their families at risk. By mid-morning the tension erupted, turning into collective action.

Met from the beginning with the resistance of the plant management, and faced with their refusal to take any action, the full workers’ council met on line 10, to report to the other workers and demand that production be stopped. They were met with applause and the unanimous cry: “close now!” The staff were protesting. The committee president took the floor and explained to the hundreds of workers on shift that, despite the repeated demands of the workers' representatives, the management flatly refused to stop production. In response to their refusal, the committee contacted ertzaina (a Basque police officer) and the labour inspector, to ask them to verify on the spot the flagrant non-compliance with the legally approved preventative measures. The result was that, far from taking action, the police officers who arrived at the factory only listened to the explanations of the manager Titos in the presence of the committee's president, and the labour inspector did not even show up. Faced with this criminal passivity of the company and the authorities, the workers decided to stop production and imposed the stoppage of productive activity in the afternoon shift.

In the face of the criminal passivity of the institutions, which puts our health and that of our families at risk, the workers in Mercedes Benz, in IVECO; the construction workers of Amazon in Dos Hermanas; the workers in Aernova (an aeronautical factory in Álava); in the Balay factory in Zaragoza, and in the Continental tyre factory in Rubí (Barcelona), are among the most significant companies where the workers have taken the initiative. They have said enough is enough, pointing out that the only way to stop the epidemic and defeat Covid-19 is with the mobilisation and collective discipline of the workers.

Their example has to be generalised. We believe that the position of the ELA (Basque Workers Solidarity trade union) in demanding the cessation of all non-essential activities and guaranteeing adequate benefits for those affected, though insufficient, is an important step in the right direction.

No trust in the state or employers! Only the mobilisation and organisation of the labour movement can guarantee the defence of public health!

Immediate cessation of all non-essential activities!

Reject the employer's plan to unload all the weight of the pandemic on the public budget just as they did in 2008. We, the wage workers, are the majority who pay the price with wage cuts, precarious jobs and the destruction of social rights!

To guarantee the wages and living conditions of workers, the self-employed and all vulnerable sections of society, we demand:

That the wealthy that control the large and medium-sized companies of the country return the wealth that they have accumulated over the decades and assume the cost of 100 percent of our salaries, otherwise they will be expropriated and placed under workers' control!

In order to put all the country's resources at the service of the people's health we demand:

Immediate nationalisation of the following strategic sectors of production:

The private healthcare sector: laboratories, hospitals, clinics, manufacturers of medical equipment and supplies, so that - under the supervision of healthcare workers and their organisations - a plan is immediately carried out to supply the necessary equipment and resources so that their work is carried out in safe conditions. To guarantee the carrying out of tests and the supply of the necessary medication!

We demand the nationalisation of the energy sector, in addition to the immediate nationalisation of large transport, logistics and distribution, and retail companies for food and basic goods, starting with the large chains of stores and supermarkets. Mercadona alone controls 30 percent of the distribution and sale of these products.

Immediate nationalisation of the entire financial and insurance sector, with compensation only in the case of small shareholders!