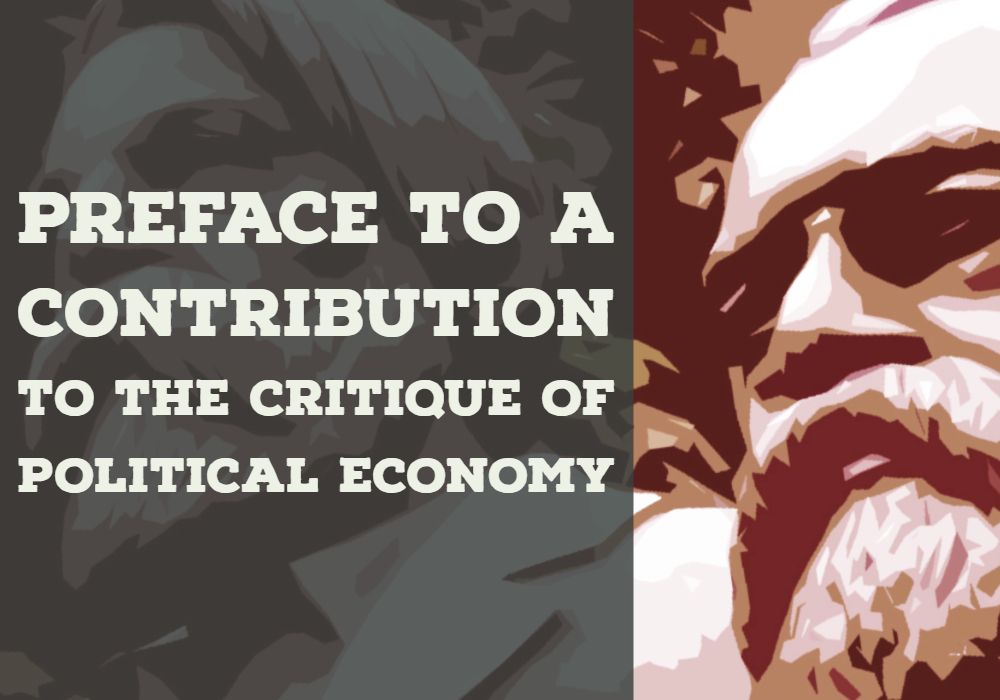 The Preface of the Critique contains the first connected account of one of Marx's main theories: the materialist conception of history. The participants in history may not always be aware of what motives drive them, seeking instead to rationalise them in one way or another, but those motives exist and have a basis in the real world.

The economic conditions of existence of the three great classes into which modern bourgeois society is divided are analysed under the first three headings; the interconnection of the other three headings is self-evident. The first part of the first book, dealing with Capital, comprises the following chapters: 1. The commodity, 2. Money or simple circulation; 3. Capital in general. The present part consists of the first two chapters. The entire material lies before me in the form of monographs, which were written not for publication but for self-clarification at widely separated periods; their remoulding into an integrated whole according to the plan I have indicated will depend upon circumstances.

A general introduction, which I had drafted, is omitted, since on further consideration it seems to me confusing to anticipate results which still have to be substantiated, and the reader who really wishes to follow me will have to decide to advance from the particular to the general. A few brief remarks regarding the course of my study of political economy are appropriate here.

Although I studied jurisprudence, I pursued it as a subject subordinated to philosophy and history. In the year 1842-43, as editor of the Rheinische Zeitung, I first found myself in the embarrassing position of having to discuss what is known as material interests. The deliberations of the Rhenish Landtag on forest thefts and the division of landed property; the official polemic started by Herr von Schaper, then Oberprasident of the Rhine Province, against the Rheinische Zeitung about the condition of the Moselle peasantry, and finally the debates on free trade and protective tariffs caused me in the first instance to turn my attention to economic questions. On the other hand, at that time when good intentions “to push forward” often took the place of factual knowledge, an echo of French socialism and communism, slightly tinged by philosophy, was noticeable in the Rheinische Zeitung. I objected to this dilettantism, but at the same time frankly admitted in a controversy with the Allgemeine Augsburger Zeitung that my previous studies did not allow me to express any opinion on the content of the French theories. When the publishers of the Rheinische Zeitung conceived the illusion that by a more compliant policy on the part of the paper it might be possible to secure the abrogation of the death sentence passed upon it, I eagerly grasped the opportunity to withdraw from the public stage to my study.

The first work which I undertook to dispel the doubts assailing me was a critical re-examination of the Hegelian philosophy of law; the introduction to this work being published in the Deutsch-Franzosische Jahrbucher issued in Paris in 1844. My inquiry led me to the conclusion that neither legal relations nor political forms could be comprehended whether by themselves or on the basis of a so-called general development of the human mind, but that on the contrary they originate in the material conditions of life, the totality of which Hegel, following the example of English and French thinkers of the eighteenth century, embraces within the term “civil society”; that the anatomy of this civil society, however, has to be sought in political economy. The study of this, which I began in Paris, I continued in Brussels, where I moved owing to an expulsion order issued by M. Guizot. The general conclusion at which I arrived and which, once reached, became the guiding principle of my studies can be summarised as follows.

In the social production of their existence, men inevitably enter into definite relations, which are independent of their will, namely relations of production appropriate to a given stage in the development of their material forces of production. The totality of these relations of production constitutes the economic structure of society, the real foundation, on which arises a legal and political superstructure and to which correspond definite forms of social consciousness. The mode of production of material life conditions the general process of social, political and intellectual life. It is not the consciousness of men that determines their existence, but their social existence that determines their consciousness. At a certain stage of development, the material productive forces of society come into conflict with the existing relations of production or – this merely expresses the same thing in legal terms – with the property relations within the framework of which they have operated hitherto. From forms of development of the productive forces these relations turn into their fetters. Then begins an era of social revolution. The changes in the economic foundation lead sooner or later to the transformation of the whole immense superstructure.

In studying such transformations it is always necessary to distinguish between the material transformation of the economic conditions of production, which can be determined with the precision of natural science, and the legal, political, religious, artistic or philosophic – in short, ideological forms in which men become conscious of this conflict and fight it out. Just as one does not judge an individual by what he thinks about himself, so one cannot judge such a period of transformation by its consciousness, but, on the contrary, this consciousness must be explained from the contradictions of material life, from the conflict existing between the social forces of production and the relations of production. No social order is ever destroyed before all the productive forces for which it is sufficient have been developed, and new superior relations of production never replace older ones before the material conditions for their existence have matured within the framework of the old society.

Mankind thus inevitably sets itself only such tasks as it is able to solve, since closer examination will always show that the problem itself arises only when the material conditions for its solution are already present or at least in the course of formation. In broad outline, the Asiatic, ancient,[A] feudal and modern bourgeois modes of production may be designated as epochs marking progress in the economic development of society. The bourgeois mode of production is the last antagonistic form of the social process of production – antagonistic not in the sense of individual antagonism but of an antagonism that emanates from the individuals' social conditions of existence – but the productive forces developing within bourgeois society create also the material conditions for a solution of this antagonism. The prehistory of human society accordingly closes with this social formation.

Frederick Engels, with whom I maintained a constant exchange of ideas by correspondence since the publication of his brilliant essay on the critique of economic categories (printed in the Deutsch-Französische Jahrbücher, arrived by another road (compare his Lage der arbeitenden Klasse in England) at the same result as I, and when in the spring of 1845 he too came to live in Brussels, we decided to set forth together our conception as opposed to the ideological one of German philosophy, in fact to settle accounts with our former philosophical conscience. The intention was carried out in the form of a critique of post-Hegelian philosophy. The manuscript [The German Ideology], two large octavo volumes, had long ago reached the publishers in Westphalia when we were informed that owing to changed circumstances it could not be printed. We abandoned the manuscript to the gnawing criticism of the mice all the more willingly since we had achieved our main purpose – self-clarification. Of the scattered works in which at that time we presented one or another aspect of our views to the public, I shall mention only the Manifesto of the Communist Party, jointly written by Engels and myself, and a Discours sur le libre echange, which I myself published. The salient points of our conception were first outlined in an academic, although polemical, form in my Misere de la philosophie..., this book which was aimed at Proudhon appeared in 1847. The publication of an essay on Wage-Labour [Wage-Labor and Capital] written in German in which I combined the lectures I had held on this subject at the German Workers' Association in Brussels, was interrupted by the February Revolution and my forcible removal from Belgium in consequence.

The publication of the Neue Rheinische Zeitung in 1848 and 1849 and subsequent events cut short my economic studies, which I could only resume in London in 1850. The enormous amount of material relating to the history of political economy assembled in the British Museum, the fact that London is a convenient vantage point for the observation of bourgeois society, and finally the new stage of development which this society seemed to have entered with the discovery of gold in California and Australia, induced me to start again from the very beginning and to work carefully through the new material. These studies led partly of their own accord to apparently quite remote subjects on which I had to spend a certain amount of time. But it was in particular the imperative necessity of earning my living which reduced the time at my disposal. My collaboration, continued now for eight years, with the New York Tribune, the leading Anglo-American newspaper, necessitated an excessive fragmentation of my studies, for I wrote only exceptionally newspaper correspondence in the strict sense. Since a considerable part of my contributions consisted of articles dealing with important economic events in Britain and on the continent, I was compelled to become conversant with practical detail which, strictly speaking, lie outside the sphere of political economy.

This sketch of the course of my studies in the domain of political economy is intended merely to show that my views – no matter how they may be judged and how little they conform to the interested prejudices of the ruling classes – are the outcome of conscientious research carried on over many years. At the entrance to science, as at the entrance to hell, the demand must be made:

[From Dante, Divina Commedia:
Here must all distrust be left;
All cowardice must here be dead.]

A. As a second footnote to the Communist Manifesto, Engels wrote in 1888:

In 1847, the pre-history of society, the social organization existing previous to recorded history, [was] all but unknown. Since then, August von Haxthausen (1792-1866) discovered common ownership of land in Russia, Georg Ludwig von Maurer proved it to be the social foundation from which all Teutonic races started in history, and, by and by, village communities were found to be, or to have been, the primitive form of society everywhere from India to Ireland. The inner organization of this primitive communistic society was laid bare, in its typical form, by Lewis Henry Morgan's (1818-1861) crowning discovery of the true nature of the gens and its relation to the tribe. With the dissolution of the primeval communities, society begins to be differentiated into separate and finally antagonistic classes. I have attempted to retrace this dissolution in The Origin of the Family, Private Property, and the State, second edition, Stuttgart, 1886.

Thus, as the science of understanding pre-history progressed (pre-history being that time before written records of human civilization exist), Marx & Engels changed their understanding and descriptions accordingly. In the above text, Marx mentions “Asiatic” modes of production. At the time, they had thought Asian civilization was the first we could speak of humanity (an understanding based on Hegel, see: The Oriental Realm). They later dropped the idea of a distinct Asiatic mode of production, and kept four basic forms: tribal, ancient, feudal, and capitalist.