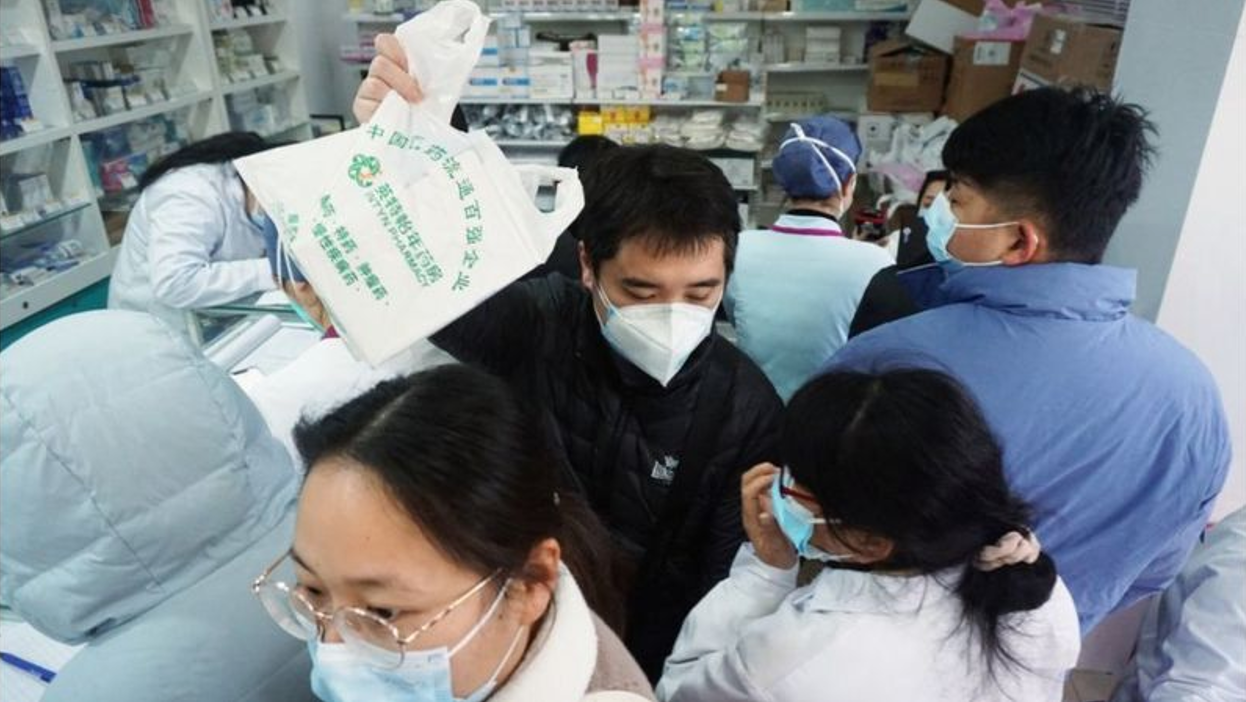 On 7 December 2022, the Chinese state issued its ‘Ten New Measures’ – a hasty shift from its ‘Zero COVID’ policy towards what it called “accurate counter-measures”. In reality, this was a complete abandonment of previous hardline measures to contain COVID-19. According to the capitalist CCP regime, the ‘Ten Measures’ are aimed at improving “scientific accuracy” in targeting outbreaks “in accordance with the situation vis-a-vis the pandemic, and the virus’ mutations”.

But looking at the facts, it’s clear that these new pandemic measures had nothing to do with “scientific accuracy”, and were rather a panicky retreat from the state’s previous measures in the face of a serious outbreak of protests earlier this month. Unfortunately for the Chinese masses, the regime had painted itself into a corner with its Zero COVID policy, as much of the population lacks any natural immunity, the Chinese-made ‘Sinovac’ vaccine is not as effective as mRNA-based vaccines available in the West, and there has been a low level of vaccine uptake, especially among the elderly. Therefore, the rapid unlocking was always going to result in a massive surge in infections.

At the time of writing, the virus is sweeping through the whole country, causing a breathtaking number of infections, whilst showing little sign of peaking. Local governments have been gradually distributing medicines, rapid test kits and relevant pandemic materials, but the masses continue to face extreme hardship. Now the state has decided to lift all pandemic measures by January 2023. The present situation is a condemnation of the capitalist system, and the bureaucratic mismanagement of the so-called Chinese ‘Communist’ Party (CCP), which have contributed to this escalating disaster.

Back in mid-November, the state experimented with relaxing its pandemic policies in Shijiazhuang, the provincial capital of northern province of Hebei. No one was satisfied with the results. Both the state and the masses were unprepared for the various pressing issues highlighted by the experiment. It concluded in disappointment. But the capitalist regime has proven that it has not learned anything from Shijiazhuang. Its failed experiment there was merely disguised as an exercise in ‘scientific’ planning. Shortly thereafter, following a significant wave of protest against COVID measures, which swept through all of China, the regime suddenly announced its ‘Ten Measures’, abandoning its lockdown policies, once more leaving the state and the nation little time to prepare the necessary measures and materials. 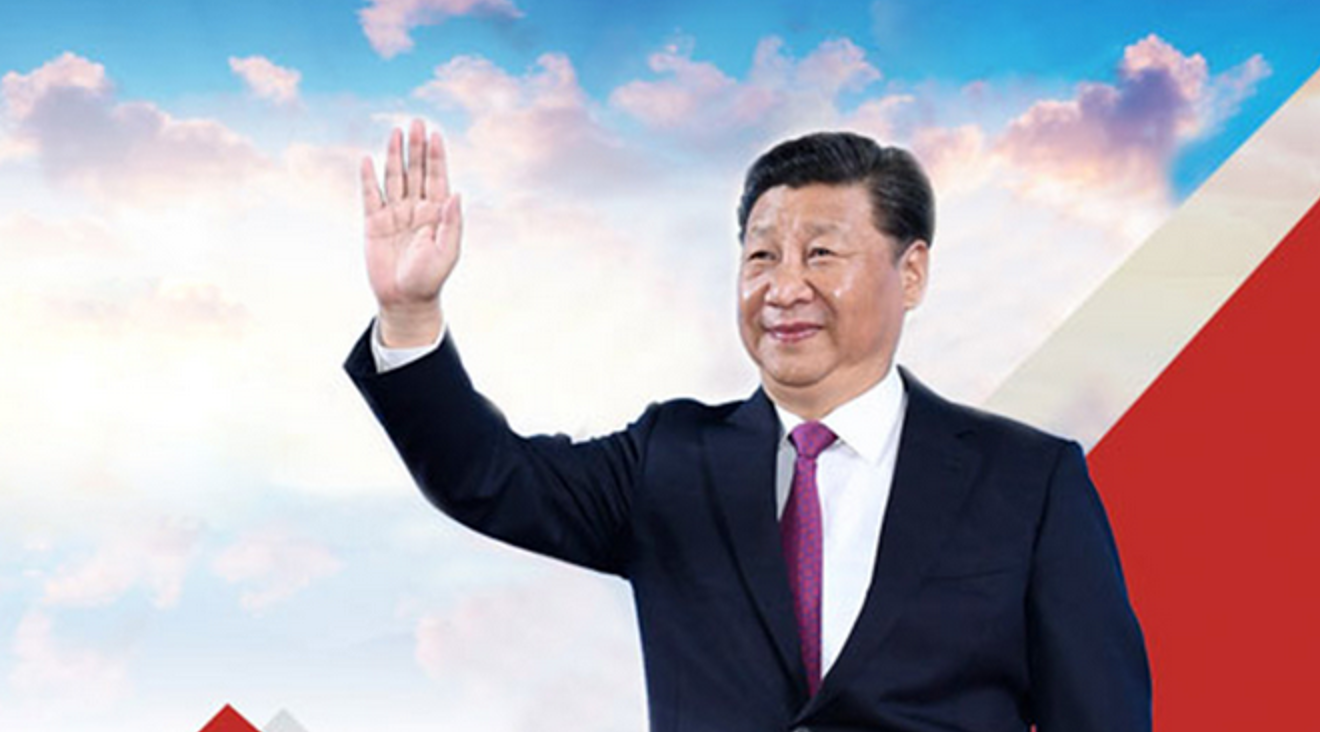 Even the blindest of the blind are inclined to exclaim: since when did Xi Jingping command this virus? / Image: Qiushi Wang

As the state introduced the new policies, ‘medical experts’ suddenly appeared, to boast on behalf of the state and deceive the masses. These paid liars, tricksters and impostors argue that the virus has decreased in severity to such a degree that we should cease to worry, and that we should no longer call the resulting illness Coronavirus disease (or Coronavirus pneumonia) but rather the ‘Corona-cold’… The government’s health departments continuously put on press conferences explaining the ‘science’ behind their new approach, and the media regurgitate their absurd lies. The message churned out is simple: the government is very reasonable and practical; the government knows better than anyone and is never mistaken – the masses need not panic.

Whilst the government and their ‘medical experts’ attempt to soothe and bamboozle the masses, by now even the blindest of the blind are inclined to exclaim: since when did Xi Jingping command this virus? Half a year ago, the same virus strain was some monstrous peril. Half a year passes and it is now a harmless cold. The masses remember. They will not be fooled so easily.

We have nothing at all…

In the words of a post by the popular Chinese internet influencer on Zhihu [a popular internet forum in China]: “when we opened up, we had nothing at all… yes, nothing at all.” There were no emergency plans for different scenarios; no preparatory meetings for infrastructural staff; no reserves of medicines to prevent shortage – the entire relaxation process was a farce. 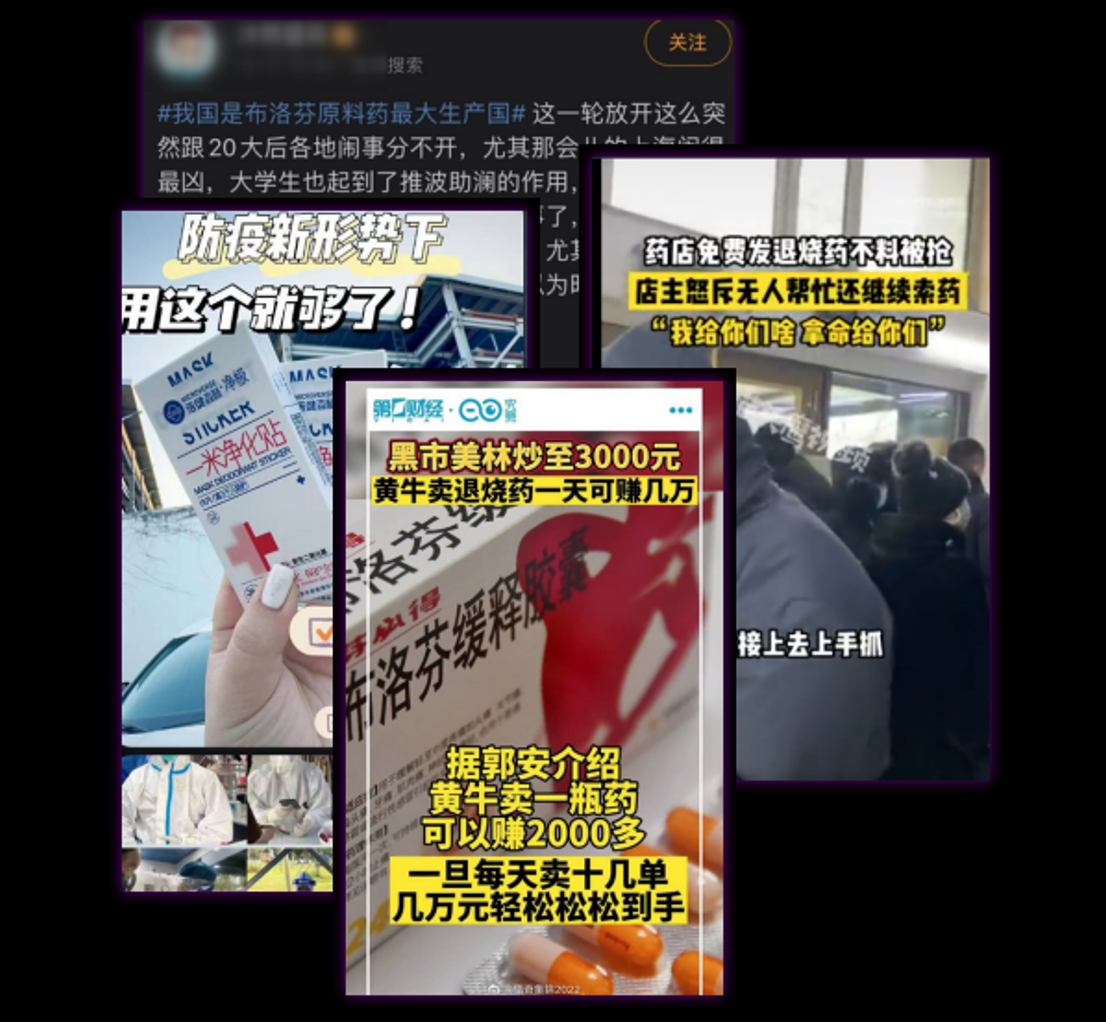 The result was chaos. As panic buying of medical materials began, all kinds of medicines for cold symptoms ran out. Some sought to get their hands on folk medicines. There were extreme shortages of thermometers; lateral flow tests; and even ventilators and oxygen. Chaotic and confused as the situation has been, the masses have been struck by anxiety about infection, how to deal with infection, which medicine to take – or whether medicines work at all.

The situation at public health institutions like hospitals is horrifying. Beds are full at all times, completely unable to accommodate the seniors. Almost all frontline doctors at fever clinics have been infected, most of them are unable to work, and there have been a number of incidents of doctors working while sick. The hospitals lack various kinds of medicines for treating COVID-19. Some people have recovered, but the overwhelmed PCR test centres have yet to provide them with test results. 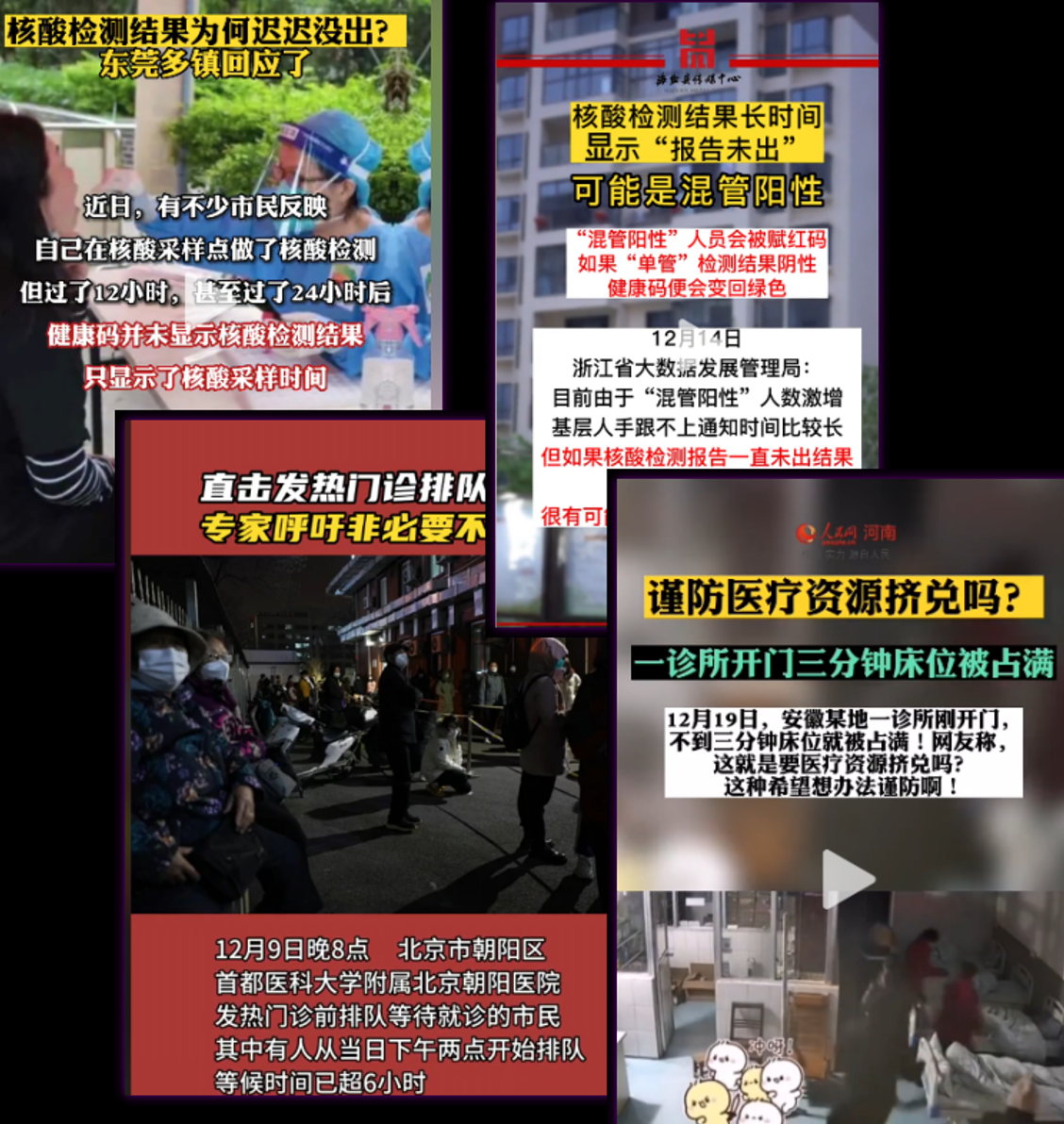 The situation at public health institutions such as hospitals is horrifying / Image: Internet

Whilst the regime is ashamed to report the death toll, the masses can see how much activity and how good business is at undertakers’: the dead can no longer be immediately disposed of, while queues form outside the funeral parlours, with people complaining that there are no freezers for the dead.

In the countryside, although infections are lower than in the cities, the social consequences are no less severe. The medical resources in the countryside are far less widely distributed, and the masses are suffering in silence. Lack of medicine, a lack of treatments (with only intravenous therapy available), long queues, and lack of beds are ordinary scenes in the countryside. The most tragic suffering there is among the seniors, with many left to wait helplessly for death. Despite some local efforts to limit the pandemic’s extent, a massacre is in the making.

The ‘Communist’ Party proclaims that it puts “people first, lives first”. But considering the scenes detailed above, this is a hollow, bankrupt proclamation. In essence, the CCP puts the Party and capitalist market interests first. For the first couple of years of the pandemic, the regime bragged about the effectiveness of its Zero COVID policy, which kept deaths far lower than in most of the west and (most importantly) allowed China’s economy to recover relatively quickly from the initial shock. 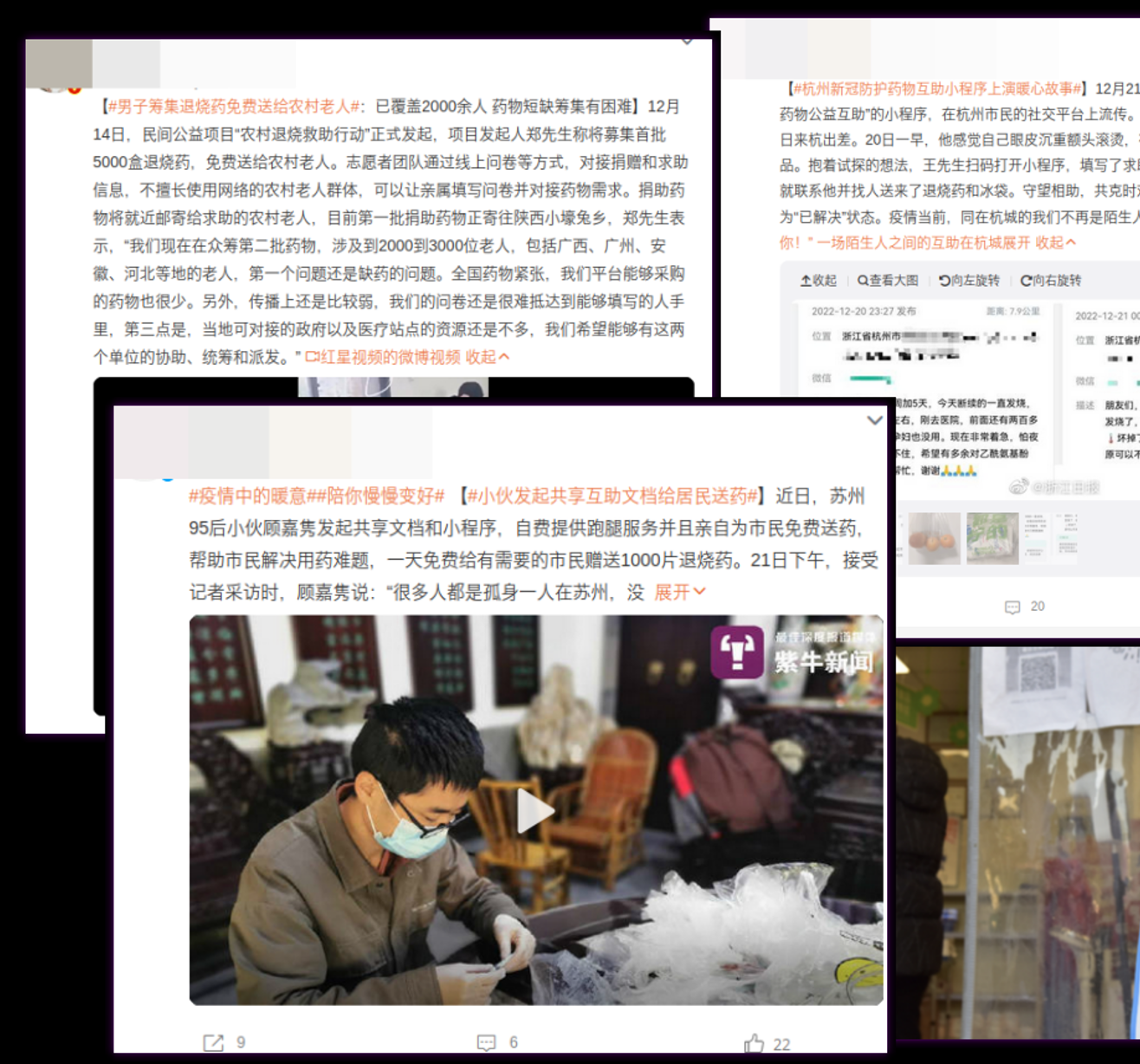 The masses spontaneously put together a new list of medicines that are effective against COVID-19 / Image: Weibo

But things tend to turn into their opposite. It was impossible for China to isolate itself from the world market indefinitely; Zero Covid began to exert a huge economic toll, and majorly disrupted trade. Meanwhile, state management of strict COVID control measures, on a capitalist basis, led to misery, poverty and hardship for millions of people, which eventually became intolerable. This is partly what lay behind the recent protest movement, which has spooked the regime into an about-face rather than risk the situation spiral out of control.

The CCP has displayed its weakness and fear of the masses, and has blinked in an attempt to nip any threat to its position in the bud. Prior to the introduction of the ‘Ten New Measures’, access to factual information about the harm of the Omicron variant and objective analysis of the pandemic became restricted and began disappearing. Articles about the pandemic were simply banned by the censors.

The only news allowed by the censors is that which benefits the capitalist rule of the ‘Communist’ Party. State broadcasters, for instance, refused to show close up shots of the crowds in the stands at the Qatar World Cup on account of them not wearing masks. The past few weeks have ironically seen the Chinese masses pushing the government into action rather than vice versa. The Chinese masses have spontaneously organised themselves for the purposes of self-help, and have established various mutual aid groups and communities. The all-powerful state has suddenly disappeared. The authorities used to have comprehensive PCR testing capabilities, but now they cannot generally supply even some minor antipyretic medicines and rapid tests (currently, these still need to be booked online for purchase).

Only when the masses spontaneously put together a new list of medicines that are effective against COVID-19 did the state finally begin issuing its own official medicine list (the local authorities for Beijing only released its list five days after the ‘Ten New Measures’; at this time only the Beijing list was available in the whole country). When people began indiscriminately taking medicines, leading to hospitalisations, the state finally began issuing advice on taking medicine correctly. Again, the state has been entirely reactive in cracking down on price spikes and restocking medicines after drastic price hikes and stocks hit zero. The belated responses of the regime when suffering is just a step away clearly show how utterly hollow all their talk of ‘putting life first’ is in reality.

The CCP has made it clear that they want to restore the economy in order to boost market confidence. Local governments have instantly responded by seeking consumers abroad for their businesses, whilst straining to assist enterprises in their jurisdictions to resume their functioning. At this moment of crisis, the working masses’ right to health remains without guarantees, as they sink inch by inch into the mire. The CCP has abandoned its promises to put “people first”. In point of fact, it puts Capital first.

Amid this catastrophe, there is no equality in how pain and suffering are distributed. An official journalist could easily acquire a bed in a mobile cabin hospital to shoot promotional videos, while millions of ordinary masses go without the beds they desperately need. The rich, along with party officials, enjoy the best medical resources. Others are unable to afford medical expenses at all. Class society in China is just as Marx described it. While the labouring masses, the vast majority, live in agony with no end in sight, a very small minority, the bourgeoisie, are in a constant race against time to step up their exploitation of workers and acquire a bigger slice of the market. 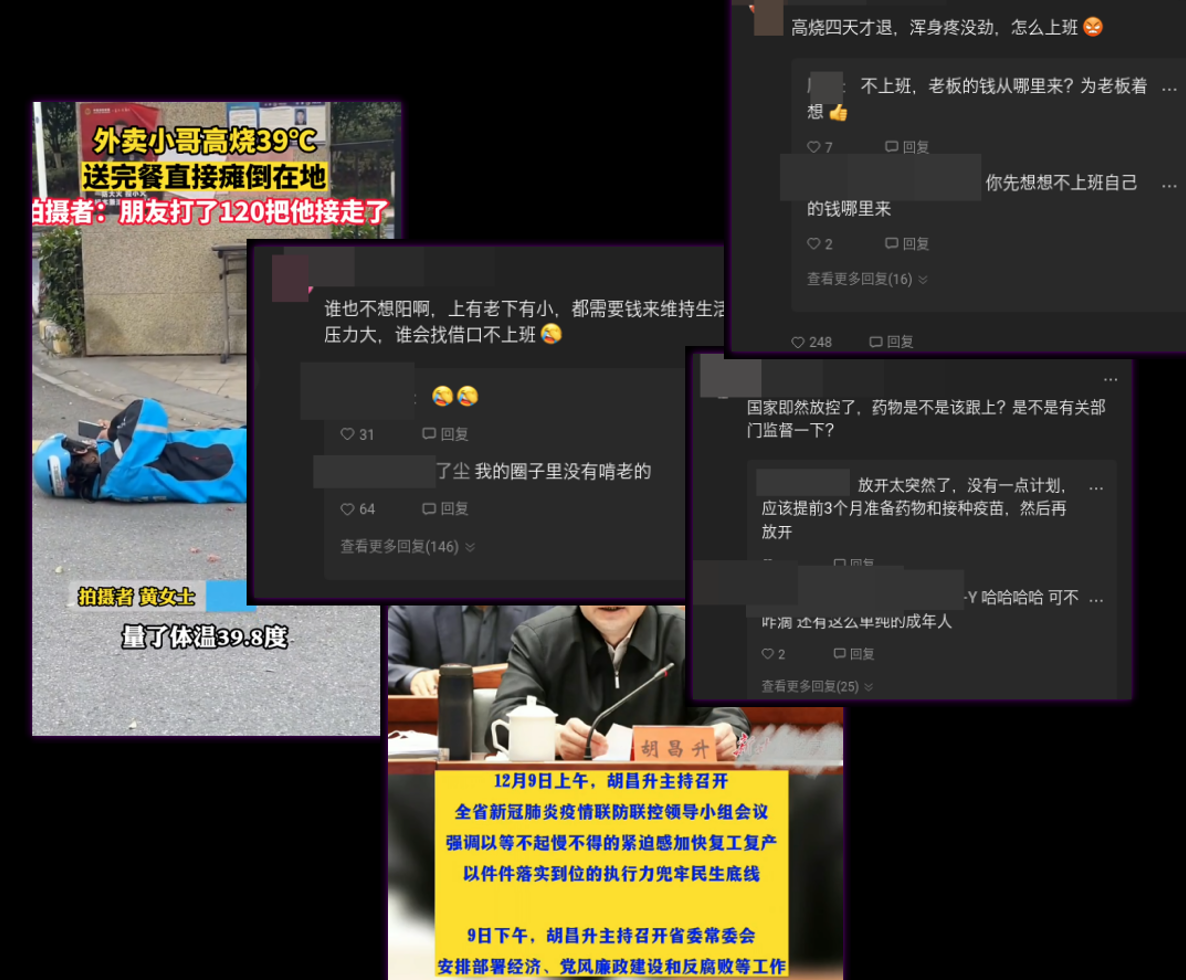 Amid this catastrophe, there is no equality in how pain and suffering are distributed / Image: Internet

For the labouring masses, everything that they are going through now will be remembered long after ‘normality’ with all of its suffering under capitalism is resumed. The unprecedented scale of anti-government protests witnessed in late November and early December have also given a layer of the masses a foretaste of their own latent strength. The present crisis of the capitalist system will continue to intensify in manifold ways, and the class consciousness of their workers and their struggles, with ebbs and flows, will tend to rise. Once the Chinese working class really begins to move as a class, the whole world will tremble.