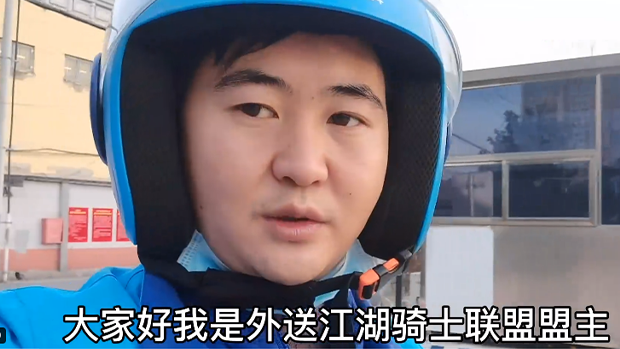 On 28 February, China Digital Times reported that a food delivery workers’ mutual aid network organiser (Xiong Yan, also known as Chen Sheng) might have been taken into police custody in Beijing. On 1 March, an informant from within the Ele.me, the online platform from which Xiong Yan gets his delivery orders, confirmed that he and some other members of his network were indeed arrested. At the time of writing, Xiong Yan’s whereabouts and status remain unknown, and speculation abounds. This news has garnered widespread attention.

The direct cause for Xiong Yan’s arrest appears to be a recent video he uploaded to the internet. In it, he exposed the adverse impact on food delivery workers (known as “riders” in China) of a recent “adjustment” of the deliverer fee by major food delivery app platforms Ele.me and Meituan. Xiong Yan’s video also exposed how Ele.me deceived workers into overwork during Chinese New Year holidays.

Xiong Yan’s video explained that, prior to the “adjustment”, riders would receive about 5 yuan regardless of the distance they travelled for each order. The “adjustment” cancelled this flat fee and tied the fee that the riders receive to the distance they’ve travelled, which could range from 3 to 10 yuan. In practice, the video explains that this amounts to an overall pay cut for the workers, and each delivery worker would lose at least 1,000 yuan per month from this change for the same amount of work.

Xiong Yan also highlighted another scandalous act on the part of Ele.me, which promised riders that they would be awarded with a large bonus of 8,000 yuan should they fulfill a set amount of orders during the Chinese New Year holidays. This is comparable to an entire month’s worth of income for most of these riders. Many workers worked their heart out for this bonus, only for Ele.me to move the goalposts by changing the required delivery target at the final hour to deprive them of it. Xiong Yan exposed this on 18 February with an online video that received over 9 million views, while related topics on Weibo reached 200 million. Although the state soon repressed all discussion of this deception, the truth was already widely known.

Xiong Yan has been the leader of an underground mutual aid network among the food delivery workers in Beijing known as the Rider’s League. This network has functioned almost like an independent union outside of official jurisdictions of the state since 2018. The Riders’ League was built through tireless efforts on the part of Xiong Yan. According to him, he once organised 16 Wechat chat groups and was in contact with over 14,000 riders or ex-riders.

However, he was only well known among the riders in Beijing prior to his recent video, which aims to reveal how Ele.me duped riders into working for an empty cheque, and its attempt to lower the wages of riders throughout all of China.

This is not Xiong’s first brush with the Chinese authorities for standing up for workers. In 2019, he was jailed for 26 days for organising a strike during the Alibaba Singles Day sales event that saw feverish online orders of goods all over China. At the time, these delivery platforms also tried to cut the wages of the riders, which prompted Xiong to organise for a fightback. His arrest is likely a measure to prevent him from leading the workers again.

The number of workers in China’s food delivery industry is in the millions and growing rapidly. Meituan, another conglomerate in the industry, has had over 4 million workers on its payroll in 2019 alone. With the outbreak of the pandemic, another 336,000 workers were hired by the company between 20 January to 18 March 2020. Meituan’s primary competitor, Ele.me employs 3 million workers and also hired hundreds of thousands of new workers during the pandemic.

Recently, outcries against the exploitation of food delivery workers are getting stronger. This ties with the fact that the entire industry employs a large number of young, educated workers. Within Meituan, 87.3 percent of the workers are between the ages of 20-40; within Ele.me, 47 percent of its workers were born during the 1990s, with the average age being 31. Both reports point out that around 20 percent of the riders hold a college or university degree. This youthful and well-educated layer of the working class is understandably incensed by the drudgery that they’ve been relegated to in order to survive.

It is then unsurprising that the publication of a report entitled ‘Food Delivery Riders, Trapped in the System’ last September inspired spirited discussion about the plight of delivery workers in China today. The article catalogues some truly appalling figures in terms of injuries and accidents as a result of riders being forced to constantly raise their speed in order to fulfil orders.

This compilation of figures, when viewed side-by-side, brought forward a level of clarity on the real situation, and consequently became itself a point of discussion. At the time of writing, the article has received almost 10,000 likes and over 1,000 comments on Zhihu alone, and with 3 million views on WeChat. Ele.me, Meituan, even the government were forced to respond. In addition, the sensation continued for over a month, adding to a powder keg of social ferment that Chinese capitalism and the regime is helpless to stop.

Following the outcry against Xiong Yan’s arrest, the state immediately cracked down on all discussions about these matters. Thousands of discussion threads on popular forums like Zhihu, Weibo, and so on have been removed. Nevertheless, at the moment this censorship appears to be futile when it comes to stopping the workers.

Even without Xiong Yan’s arrest, the gig workers of China are already in a state of brewing ferment. There were two separate strikes launched by food delivery workers in Shenzhen in the south and Tongxiang in the east at the beginning of this month. There is also an ongoing struggle of Didi drivers (a taxi-hailing app similar to Uber), in which more than 1,000 drivers stopped working on 1 March. When the news of Xiong Yan's arrest came amidst all this, it whipped up national attention, which led to a widespread call for a nationwide strike by riders on 8 March. There is further news that such a strike is already being organised by other leaders of the Riders’ League. At the time of publication, we are still awaiting updates from this strike, which could be difficult to come by due to state repression and censorship. 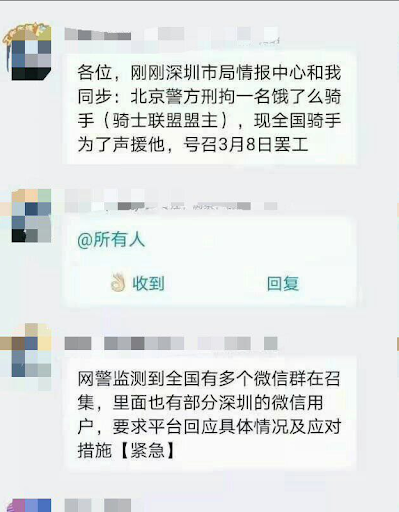 This screenshot has been circulating widely since 4 March. The message suggests that the police already knew about the planned solidarity strike. The text reads: “Everyone, the Shenzhen Police Intelligence Centre just informed me that: Beijing police jailed an Ele.me rider (Leader of the Rider’s League), and in support of him, the riders across the country plan to go on strike on 8 March.” / Image: public domain

Needless to say, the CCP state will do everything it can to break this upcoming strike. It is particularly important for them to prevent any mass action taking place at this time, because the National People's Congress (NPC) and the National Committee of the Chinese People's Political Consultative Conference (CPPCC) are now in session. The CCP planned on using this occasion to gloat about their relative success in controlling the pandemic in the past period. They cannot tolerate any movement from below that will expose the brutal reality that working-class Chinese people are living through. 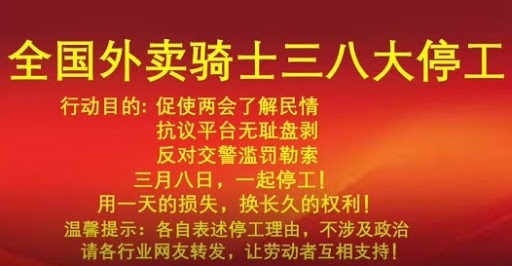 A graphic that was circulated online for all delivery riders to go on strike on 8 March in an effort to show the real situation to the National People's Congress (NPC) and the National Committee of the Chinese People's Political Consultative Conference (CPPCC), both now in session / Image: public domain