The Brazilian general elections begin on 7 October. Far-right presidential candidate, Jair Messias Bolsonaro of the PSL, is leading in the polls, which has provoked a huge reaction from the left in Brazil, with some (including the PT) calling him a fascist, or fearing he will attempt to restore the military dictatorship. Lucy Dias of Marxist Left explains what Bolsonaro stands for, and how to fight him.

The position of the Marxists is not to combat Bolsonaro on the basis of bourgeois morality. Our morality reflects the interests of the working class as a whole, and our politics and activity express the most resolute form of this struggle. That must be our starting point.

By contrast, look at the kind of arguments raised by ‘left-wing’ politicians in Brazil, like Guilherme Castro Boulos, of the National Coordination of Homeless Workers' Movement:

“Bolsonaro received a housing allowance while he already had a home. He had two projects approved, but bought five properties – so he bought more properties than projects. Are you not ashamed, Bolsonaro?”

This kind of question does not help the workers understand the central problem, which is not that this candidate is corrupt and uses politics for personal enrichment – although this is true. The central problem is the capitalist system itself, which is corrupt by its very nature. The capitalists’ representatives in parliament want to maintain the bourgeois state – partly for their own, immediate interests – but mainly to break the resistance of the workers, using the whole state apparatus to keep them as exploited and oppressed as possible. That is exactly why Bolsonaro is not going to ‘change everything’: the system is already rotten.

If we want to combat Bolsonaro from the point of view of proletarian morality, we must bear in mind that this morality presupposes a defence of the interests of humanity itself, which is entirely linked to the fight for world revolution and the liberation of the working class. When Bolsonaro issues statements in support of torturers and rapists; and recommends combatting violence with more violence – as he openly proposed as a solution to violent crime in Rio – he represents bourgeois morality, which strives to sink a generation of workers and youth into barbarism in order to maintain bourgeois interests. And that is exactly what we oppose. The working class and youth deserve a future in which daily violence is no longer a common part of life.

Attacks on workers and youth

In interviews, Bolsonaro, and his lead economist, Paulo Guedes, are clear in representing the bosses’ interests.

Bolsonaro states that wages are little for those who receive them and a lot for those who pay them. He appoints himself as the bosses' spokesman, saying that “at some point, the workers will have to choose between rights or employment”.

Bolsonaro has appointed himself as the bosses' spokesman, saying that “at some point, the workers will have to choose between rights or employment” / Image: Flickr, jesocarneiro

Putting a knife against the workers' neck, what he is saying is: “choose between unemployment or precarious work.” His antagonistic stance towards workers is clear in that he has already voted for approval of the Labour Reform and Constitutional Amendment 95, the spending ceiling and reducing the supply of public services – even for those who think he will represent their interests, as in the case of military personnel. Or do the children of the military and their families not use public services?

When it came to voting on the draft bill on outsourcing, Bolsonaro cynically abstained, but when the bill for the regulation of domestic labour came up, he voted against, denying the rights of millions of Brazilian workers who provide these services.

Guedes, in an interview with Globo News, said openly that a Social Security Reform like the one carried out in 1981 in Chile, under the dictatorship of Pinochet, is necessary. It is worth explaining to young people and workers that this ‘reform’ privatised welfare, putting workers’ money in a fund that was managed by capitalists, who invested it in the financial market. The result for the first generation that retired under this model was a brutal reduction in living standards and purchasing power. According to data published by the BBC, 90.9 percent of retirees receive less than the equivalent of 149,435 pesos, something around $USD 179.09, while the minimum wage in Chile is 264 thousand pesos, equivalent to $USD 316.38.

Bolsonaro and his economist crony also have a privatisation programme that covers everything from state-owned companies to education: providing the possibility of the student choosing whether to study in a public or private school. But we should explain to the youth that the expansion of private higher education in Brazil was due to lack of investment in public universities. This made the provision of free education to everyone (at all levels) impossible, and forced working-class children to pay tuition fees in order to study at private universities.

Moreover, Bolsonaro intends to continue the Brazilian state's disregard for education and research, as we can see in his statement about the National Museum fire ("it is already done, already burned down, what can be done?")

Regressing to the 19th Century

Guedes defends what he calls a ‘liberal-democratic agenda for Brazil,’ which involves, in very simple terms, handing over state-owned companies as a quick way of obtaining hard currency for the payment of public debt; increasing the direct exploitation of the labour force; reducing labour and social security rights and limiting the scope of collective bargaining agreements. The proposal of the Green-Yellow Portfolio will see bosses "negotiating directly" with the workers – not via their elected leadership or mass organisations through collective bargaining. What he intends is to bring us back to the conditions described by Engels in 1845:

"In many regions, notably in the north of England, it is customary to hire workers for a year. They undertake not to work for anyone else during this period, but the employer does not undertake to give them work; they often go out of work for months, and if they look for work elsewhere they will be sent to prison for six weeks for leaving their post."

Bolsonaro wants to be elected to attack the whole working class and the youth. And so, we oppose him, explaining that our struggle is for the interests of the working class as a whole. 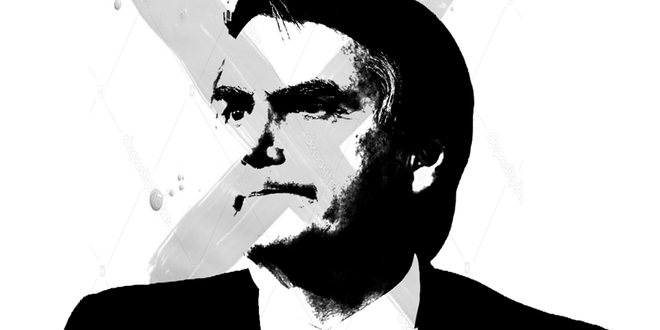 Bolsonaro wants to be elected to attack the whole working class and the youth. And so, we oppose him, explaining that our struggle is for the interests of the working class as a whole / Image: Marxist Left

The group "Women Against Bolsonaro" has dragged several other movements and tendencies into street mobilisations, which is undoubtedly an expression of resistance and a willingness to fight. However, we must explain that the fight is not just against Bolsonaro but all the other bourgeois candidates. The emancipation of the workers will be achieved on the basis of their own forces, and for this we must organise ourselves to combat capitalism.

What about the education of our children?

Bolsonaro said, when asked by journalists, that all education at all levels could be done remotely. He is in favour of the project: "School Without a Party", which consists of the following:

When Bolsonaro uses anti-Marxist phraseology to support his plans, he is also signalling to the sharks in the private education sector that he supports their efforts to reduce costs, and will open up another private market for them to exploit.

Is Bolsonaro a fascist?

Since 2013, the thesis of the so-called "conservative wave" has been developed by the PT and others that proclaim themselves socialists in Brazil. This thesis, on the one hand, in a cowardly fashion blames the workers for the election of the "most reactionary congress in history".

They regard Dilma's impeachment and Bolsonaro's position in the polls as evidence of the rise of fascism. They also seek to exert pressure on leftist organisations to rally to the defence of the class collaborationist policies of the PT and Lula. We were against the impeachment of Dilma and the imprisonment of Lula without evidence, but we do not surrender to these ideas.

To call Bolsonaro a fascist is incorrect at the present stage: his election will not lead to a militarised organisation aimed at morally and physically destroying the working class. He has no organised base incited to that end.

If the bourgeoisie have misgivings with regards Bolsonaro, the greatest of them is precisely their memory of the fate that befell Fernando Collor de Mello, who was elected President in the 1990s to the horror of traditional, bourgeois politicians.

More than the "incompetence" or "incoherence" of Bolsonaro, what most worries the ruling class is the memory of the "Down with Collor" campaign, a mass movement with millions on the streets. That is why the bourgeoisie is afraid of supporting him, and why important sectors of the ruling class are campaigning for the PT.

In order to combat Bolsonaro, we must call him what he is: an enemy of the workers, a defender of torture and of the inequalities created and deepened by capitalism. A right-wing demagogue uses the anti-establishment sentiments of the people to reinforce illusions in the system itself. Calling him sexist, racist and homophobic (which he is) solves nothing (most bourgeois candidates are all of these things as well). When Bolsonaro was stabbed during a campaign event, this only allowed him to play the victim card and pushed him away from public debates, preventing his anti-worker statements from being more widespread.

To combat him, we have to be organised before and after the elections, presenting propaganda against capitalism and for socialism. We must actively work for the construction of revolutionary leadership, that will guide the workers and youth towards freedom, and consign creatures like Bolsonaro to the dustbin of history.