The conferences recently held by Alan Woods and organized by the Sociology Student Centres ay the USFXCh University in Sucre and the UAGRM University in Santa Cruz, in collaboration with the International Marxist Tendency, have been a resounding success, which we could even describe (without fear of exaggeration) as unprecedented, with around 800 taking part. 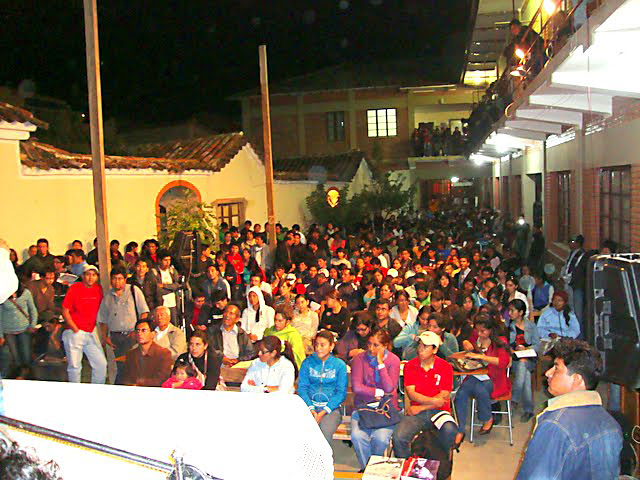 There was a large and attentive audience, which shows the keen interest in the ideas of Marxism, particularly, though not exclusively, amongst the youth. These meetings are the culmination of the organizational efforts of all our comrades and an excellent starting point for the spreading of Marxism as a method of political struggle in our revolution.

More than 500 people filled the main courtyard of the Sociology Department at the USFXCh University in Sucre, while the Aula Magna of the UARGRM University in Santa Cruz de la Sierra, which has a capacity for 250, proved to be too small for the large numbers who wanted to attend. In Sucre, almost all of the Sociology students attended, as well as professors, workers, MAS members and leaders of the Chuquisaca Indigenous Peasant Workers’ Trade Union Federation, who gave greetings to the meeting and saluted Alan Woods’ presence.

In Santa Cruz de la Sierra there were a large number of Sociology and Political Science students, local leaders of the Departmental Trade Union COD, leaders of the Santa Cruz Urban Teachers’ Union, many members of the MAS Youth, including its national leader, the comrades from the Video Urgente collective – who interviewed Alan Woods at the end of the event – as well as a team from the state TV station, Canal 7. Also present was comrade Jose Justiniano Lijeron, a longstanding cadre of the national trade union confederation, COB, going back to the period of the struggle against the dictatorship and for a People’s Assembly, who came to the meeting despite his frail state of health.

In his speeches about “Socialism of the 21st Century and the World Revolution,” Alan Woods started by reminding us about the promises of peace and prosperity which the ideologists of capitalism and the ruling classes had made 20 years ago after the fall of the USSR. He stressed how the ideas of the so-called “new left”, after a long period of expansion of capitalism, in their watering down the revolutionary and emancipatory essence of Marxism, represented nothing less than a capitulation to the ideas of the ruling class.

“The theory of 21st century socialism has an enormous advantage over any others: nobody knows what it really is. It is like an empty vessel which with incomprehensible academic phraseology is filled with reformism”, stressed Alan, who also explained how the marvellous revolution in the Arab world, to which he dedicated most of his speeches, brushes aside in one stroke both the false promises of capitalism and the reformist illusions of revisionism.

The revolution in the Arab countries shows without a shadow of a doubt, and also in practice, the validity of Marxism, of class struggle and the key role of the workers’ movement, which has been crucial in the movements in Tunisia, Egypt and the other countries of North Africa and the Middle East. “In today’s world, not a light shines, nor a wheel turns without the kind permission of the working class,” said Alan, and in this lies the strength of the working class and their social weight. When, like in Egypt and Tunisia, workers become aware of their strength, there is no army, no police, no amount of repression that can stop them. 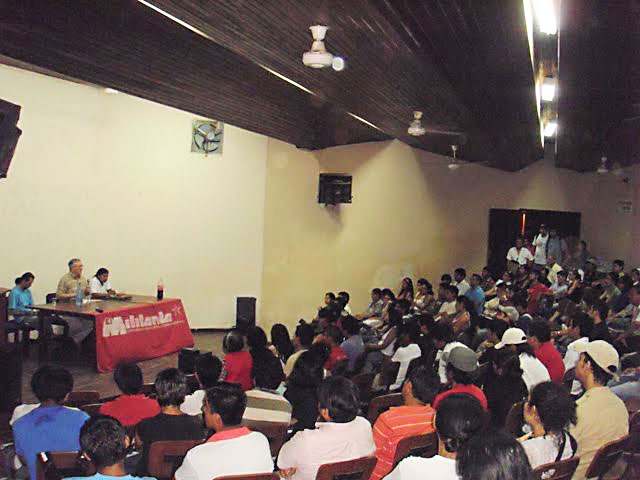 The Arab revolution has only begun. This revolution is born out of social demands for jobs, housing, healthcare, education, etc., which capitalism, going through the deepest crisis in its history, is unable to solve “because it cannot even solve them in the big world economic powers of Europe or the US, as shown by the struggles in the old continent and those of the workers in Wisconsin (in the US)”. For this reason “the land, the banks and the big industries should be taken over by the state and the state should be in the hands of the working class” said Alan to enthusiastic applause.

As comrade Alann G., representative of the IMT in Santa Cruz de la Sierra, said, these conferences had the aim of changing the habit of “looking at the world from Bolivia, to one of seeing Bolivia in the context of the world crisis of capitalism”. In this context, there were many questions about the situation in Bolivia, the perspectives for the Bolivian revolution, the role of the indigenous movement, etc.

In his reply, Alan Woods underlined the position that the International Marxist Tendency defends in Bolivia. We actively support the government of Evo Morales and the strengthening of the MAS, because like any worker, peasant and indigenous person of Bolivia, we are aware that our common enemies are the right wing, the oligarchy and imperialism. However, within the framework of this common battle we fight the ideas of reformism because they represent a threat to the revolutionary process itself.

Making an analogy with the situation in Venezuela, which is very similar to what is happening in Bolivia, Alan Woods reminded the audience that, “it is impossible to make half a revolution, without expropriating Capital, because that leads to chaos, sabotage of production, flight of capital and makes it impossible for a genuine planning of the economy to take place. You cannot plan what you don’t control and you cannot control what you don’t own”.

“If the revolution stops mid-way it would have been better not to have started it, because the consequences would be terrible. If the ruling class and imperialism hold on to their economic power, they will sabotage and create chaos. Reformism sows confusion and mistrust amongst the ranks of the people and therefore paves the way for a return of a furious right wing which would crush all the social and democratic conquests of the workers, peasants and the indigenous peoples, using against them the whole might of the state apparatus, the laws, the judges, the forces of repression, to make sure they will never raise their heads again. This is the lesson of the history of revolutions worldwide,” stressed Alan Woods in his reply.

The success of Alan Woods’ conferences in Bolivia is even more amazing if one considers that none of the books that have made him known in other countries as a Marxist theoretician, revolutionary and leader, have been published in Bolivia. In order to overcome this, the comrades of the International Marxist Tendency in Bolivia were selling the publications and books of the “Carlos Marx” Socialist Studies Centre and organized a raffle of the very few copies available of Alan Woods’ most recent book “Reformism or revolution: Marxism and socialism of the 21st Century”. A total of 800 bolivianos (US$115) was raised for a fund to publish Alan Woods’ and other Marxist books in Bolivia.

This successful speaking tour of Alan Woods in Bolivia was organized thanks to the efforts of the comrades of the International Marxist Tendency and the Sociology Student Centres of Sucre and Santa Cruz de la Sierra. In their name we would also like to thank the Embassy of the sister Bolivarian Republic of Venezuela for their precious help and support in all logistic aspects, a further example of the active support of the Venezuelan revolution for the Bolivian revolution.

The enthusiastic and highly politicized mood amongst those present in the meetings spurred Alan Woods himself to greet the participants with these words: “in this audience I do not see youth or students; I see the army of the proletariat, the army of world revolution,” which was received with warm applause. The task that remains before us now is that of organizing and strengthening that army so that we can face the battles that lie ahead of us for the deepening of the Bolivian revolution towards socialism and for world revolution.