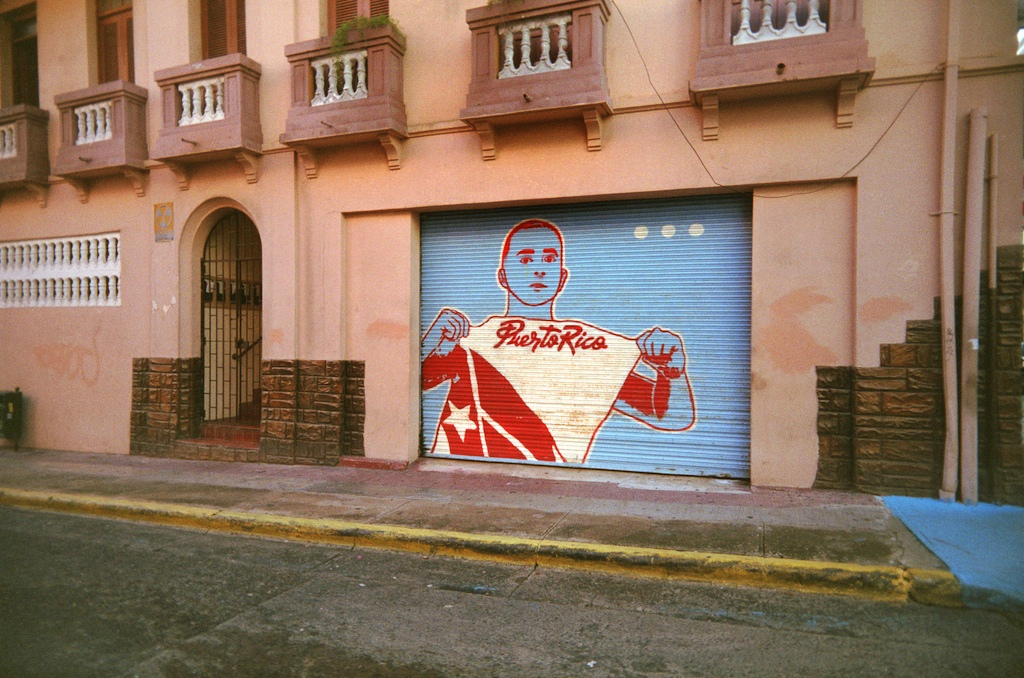 The capitalist crisis is relentless, ravaging one region of the world after another. As exemplified by Europe’s “weakest link,” economic and political turmoil in even a small country like Greece can have a knock-on effect throughout the world system. In the Americas, there are many “weak links.” The Commonwealth of Puerto Rico is just the latest of the world’s economies to be dragged down by the crisis. Made up of 143 mostly uninhabited islands, cays, atolls, and islets, it is formally an unincorporated territory of the United States, and is linked by countless economic, social, political, and historic ties to the US mainland.

From 1493 until 1898, the island was brutalized and bled white as a colony of Spain.  After the Spanish-American War—an adventure carefully prepared and fomented by the world’s then-rising imperialist power against its weakening Iberian rival—it became an equally exploited and oppressed colony of the United States. For 117 years, Puerto Rico has been militarily occupied and dominated by American big business, the US Congress, and the presidency.

Just one year after being ceded to the US by Spain, in 1899, Hurricane San Ciriaco ruined the annual coffee crop and destroyed vast swathes of the country. Eager to profit from the woes of others, US companies swooped in and bought up land at rock-bottom prices, thereby expanding their control over the island. In 1917, US citizenship was extended to all Puerto Ricans—just in time for its young men to be drafted into the military and sent off to fight in World War I (as they have fought in every US war since). As US citizens, Puerto Ricans have their “fundamental rights” guaranteed by the US Constitution. However, as a US territory, like Guam and the US Virgin Islands, these citizens have no voting representation in the US Congress.

As part of American imperialism’s “backyard,” and strategically positioned in the Caribbean, the tropical island was once an important source of coffee, tobacco, fruit, and above all, sugar. By the 1930s, the island’s entire sugar industry was dominated by a handful of US corporations. After World War II, many light industrial companies offshored their factories from places like New Jersey and New York to Puerto Rico, in order to avoid union wages, protections, and federal taxes. Manufacture of leather, apparel, razors, food, and tobacco flourished for a brief time during the postwar boom, only to be offshored to Asia and other parts of Latin America by the 1980s and 1990s. Seven years into the Great Recession, little remains of once-important industries such as pharmaceuticals, chemicals, machinery, and electronics.

For decades, the US federal government provided a certain level of spending and services for the island, as a counterbalance to the influence of the USSR, particularly in the aftermath of the Cuban Revolution. However, these threats have subsided and the US government is itself in deep debt. This has crippled its ability to push its financial and military weight around as it once did. Today, Puerto Ricans must depend on shrinking access to government jobs, the service industry, and tourism, along with money brought and sent home by Puerto Ricans working on the US mainland.

Considered the “most competitive economy” in Latin America by the World Economic Forum, and as a “high income economy” by the World Bank, wealth inequality is high, with a Gini coefficient of 53.1. Per capita income is around $28,000, relatively high when compared to its immediate neighbors, but roughly half that of poor US states such as Mississippi. And yet the cost of living is higher than on the mainland, with many basic goods costing twice as much. 41% live below the poverty level, with some estimates as high as 60%. There are more Walgreens and Walmarts per square mile in Puerto Rico than anywhere else on US territory, a reflection of the low-quality jobs and goods available to the majority on the island.

The Great Recession hit Puerto Rico even harder than the rest of the US. Aside from a paltry 0.2% growth in 2012, Puerto Rico has been hammered by 8 years of economic downturn. With few remaining natural resources, the manufacturing industry shattered, and heavily dependent on imports—due in large part to special US-imposed legislation that fetters the island’s ability to freely import necessities such as food, petroleum, and automobiles—Puerto Rico is now $72 billion in public debt—nearly four times the debt owed by Detroit at the time that city declared bankruptcy.

After pulling a rabbit out of a hat to cover some of its obligations, the government has now defaulted on a $58 million bond payment, and its bonds have been granted “junk” status by the predatory credit agencies. Further defaults could have implications far beyond the country’s waters. In the epoch of globalized crisis, the world’s debts are bundled and sold to speculators in every corner of the earth. For example, many pension funds around the US are invested in Puerto Rican bonds, and as a result of the default, may be unable to meet their own payment obligations. The US federal government has refused to extend Chapter 9 bankruptcy protection, as to allow this would encourage other states with crisis-battered finances to also seek refuge from creditors. While its debt-to-GDP ratio of roughly 68% is less than the US ratio of 102%, with the island’s weak economy and infrastructure it will never be able to pay the debt back. With a population roughly equal to the state of Connecticut, it has less than half the total GDP. To put the scale of the disaster into perspective, each and every one of the 3.5 million people living on the island would need to pay $1,400 just to cover this year’s $5 billion in principal and interest payments. 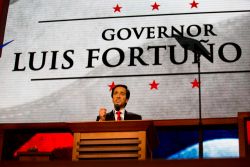 Luis Fortuño, former Governor of Puerto Rico.
Photo: Mallory Benedict/PBS NewsHourAlready, austerity has cut deep. On top of issuing even more debt, the only solution offered by the traditional ruling parties has been savage attacks on living standards and public sector unions. Under the Fiscal Sustainability Act of the Government of the Commonwealth of Puerto Rico, former Governor Luis Fortuño of the New Progressive Party used “emergency powers” to renegotiate public workers’ contracts, freeze salaries, liquidate unused sick days, and curtail collective bargaining rights. Under pressure from creditors—i.e., doing the bidding of international capital and imperialism—17,000 public employees were fired immediately, with thousands more on the chopping block. Steep increases in the price of water, gasoline, and electricity were implemented, public pensions and health benefits were cut, the retirement age raised, and as many as 100 public schools were closed or are slated for closure. Now the equally right-wing Popular Democratic Party is in power, and further cuts and plans to privatize the deeply mismanaged and indebted state-owned energy company and other assets remain at the top of the government’s to-do list.

As in Greece, squeezing the lifeblood out of the working class has only exacerbated the crisis, reducing tax revenues even further and leading to an exodus from the island not seen since the West Side Story 1950s. With its once relatively robust social safety net in tatters, some 400,000 have left the island over the last 10 years. There are now more people of Puerto Rican descent—nearly 5 million—in the US than there are in Puerto Rico itself, concentrated largely in New York City, Florida, Pennsylvania, New Jersey, New England, and Chicago.

Governor Alejandro García Padilla has called the island’s situation a “death spiral.” But other than lamenting the woes he faces and issuing ever more debt in order to pay off previous debts, he has no solution other than to intensify austerity and continue on the same path as his predecessors. The traditional ruling parties offer nothing other than collaboration with imperialism and big business. Their only real difference—a superficial one when it comes down to it—is over whether they seek full US statehood or prefer to maintain the current commonwealth status. Unfortunately, despite longstanding traditions and some positions in the trade unions, the left in Puerto Rico remains small and fragmented and has been unable to establish roots in the working class. The Working People’s Party of Puerto Rico, founded in 2010, has so far not succeeded in gaining much electoral support for its soft left-reformist and environmentalist program.

Alejandro García Padilla.
Photo: Presidencia República DominicanaAs for the independence movement, it is a small minority at present. Marxists unconditionally support the right of self-determination of the Puerto Rican people, up to and including complete independence from the US, if this is the will of the majority. However, recent referendums have shown overwhelming popular support for either full statehood or continuation of the status quo. This may well change, and it is up to the Puerto Rican people to decide this. However, from the perspective of the international working class, we must be clear that in the epoch of capitalist decay and imperialism, there is no solution to the problems facing Puerto Ricans on a capitalist basis, no matter what the legal relation to the US and the rest of the world may be.

Like its Caribbean neighbors, the island has a rich and inspiring history of class struggle, including slave, independence, and anti-imperialist uprisings against both Spanish and US domination. Most importantly, the workers of Puerto Rico have a proud tradition of trade unions and labor struggles. In 1998, a massive two-day general strike spearheaded by the telephone workers brought the country to a standstill in a momentous but nevertheless failed struggle against privatizations. In 2008, an illegal teachers’ strike enjoyed 90% support from its 42,000 teachers and shut down 1,500 schools. In 2010 and 2011, mass strike action of the University of Puerto Rico at one point shut down 10 of 11 campuses. In the summer of 2014, public sector unions disrupted transportation and threatened a general strike in response to mass layoffs and austerity, though in the end this did not materialize.

The dead end of Puerto Rican capitalism is a sobering example of what is coming soon to a US city, state, or municipality near you. Its native ruling class is craven, corrupt, and rotten to the core, bound hand and foot to imperialism, and incapable of playing even the slightest progressive historic role. As the errand boys of corporate America, these people’s purpose is to make the Puerto Rican workers pay for the crisis of the system. Nonetheless, d espite the defeats of the past and the lack of a clear, class-independent leadership, the power of the workers to paralyze the economy and pose the question “who really runs society?” remains as present as ever. Some of the first measures of a revolutionary workers’ government would be to repudiate the debt—which was not incurred by the working class—the nationalization of the key levers of the economy, to be run under democratic workers’ control, and an internationalist appeal to spread the revolutionary struggle around the world.

Socialism cannot be built within the borders of a single island; for that, a worldwide revolution and transformation of society is necessary. However, the struggles of the Puerto Rican workers can easily serve as a lightning rod for spreading the struggle throughout the region and into the heart of world imperialism itself. I n unity with the millions of Puerto Ricans living in the US, the broader US working class, and workers throughout Latin America and the Caribbean, the struggle to end capitalism in Puerto Rico would be an inspiring beginning to the struggle for a Socialist Federation of the Americas and of the world.