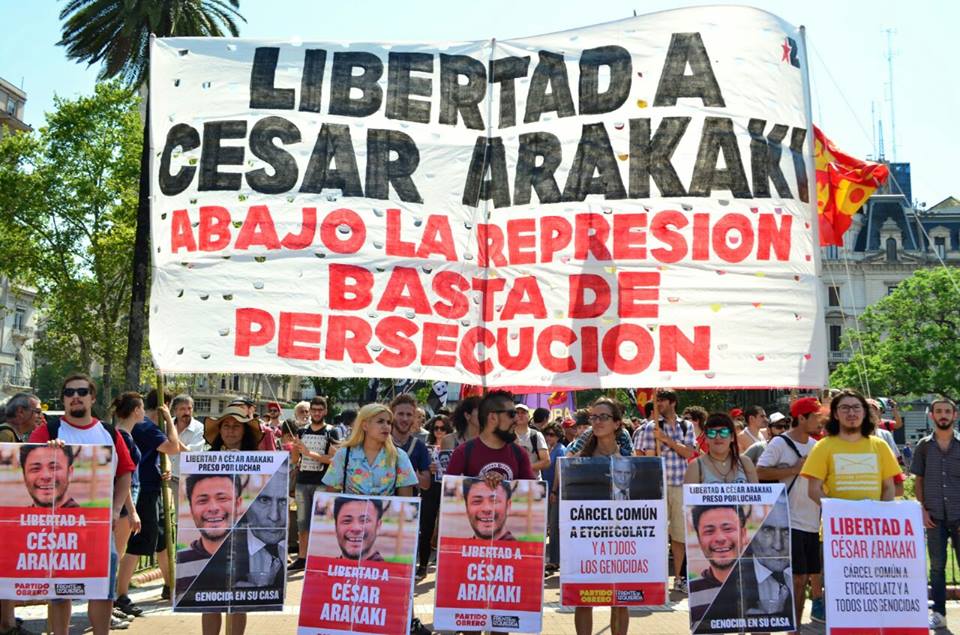 Following huge protests against counter-reform of the pensions system in Argentina in December, the right-wing Macri government has launched an offensive of repression and criminalisation against left-wing organisations and activists. Two members of the Partido Obrero (Workers’ Party) have been arrested, and several activists from other organisations (including members of parliament) have been indicted. The International Marxist Tendency expresses its solidarity with the comrades, demands the end to all repression and calls on working-class and solidarity activists internationally to show their support.

On 14 December, a huge mobilisation prevented the Macri government from passing a brutal counter-reform of the pensions system. This was the latest attack in a series of anti-worker and anti-majority measures the Cambiemos government has implemented since it was came to power in December 2015. On 18 December, another huge mobilisation of hundreds-of-thousands attempted to stop the pension counter-reform. The state used brutal repression to clear the demonstrators, attacking the press, using rubber bullets and tear gas, running over protesters with police motorbikes and using agent provocateurs to incite violence. The protesters attempted to defend themselves and protect the march.

Now the government has opened a series of court cases for “tumult”, blaming the protesters for the violence and charging them with conspiracy to use violence to stop the workings of parliament. Two members of the Partido Obrero: Javier Arakaki and Lucas Sauret, were indicted at the end of December and Arakaki has been remanded in custody, pending trial. The whole case against them is fabricated and there is no evidence for the crimes they are charged with. Furthermore there are no grounds for keeping Arakaki in custody, as he turned himself in to the police and there is no risk of flight. Meanwhile, the only police officer arrested has been released without charges, though footage shows him deliberately running over a protester with his motorbike (see below). Another member of the PO, Dimas Ponce, has also been charged and is likely to be arrested today.

11 members of parliament from Kirchnerism and the PTS (Socialist Workers’ Party) are also indicted for assaulting police officers and obstruction of police agents for their part in the protests of 14 December.

On 5 January, Patricia Bullrich, the Federal Minister for Security, accused the Partido Obrero of having planted two explosive devices in an armoured car outside the Central Department of the Federal Police:

There were “PO leaflets” left at the scene. This is a clearly fabricated provocation. Anyone who is familiar with the policies of the PO knows that this party is opposed to methods of individual terror.

This latest offensive of state repression comes on top of other high profile cases of attacks on democratic rights under the Macri government. For instance, the jailing of social and trade union activist Milagros Salas, condemned for “tumult”, “incitement” and “sedition” for her role in organising protests against the government. There is also the case of the killing of indigenous and land rights activist Santiago Maldonado at the hands of the police.

The Argentinean government and the state were humiliated on 14 December, when mass protests initially prevented the passing of the pensions counter-reform. They now want to exact revenge and send a clear signal to social and trade union activists that protest not acceptable. The targeting of left militants is meant to send a message to wider layers that the government will continue implementing its policies and will not allow protests to prevent it from doing so. In the next few months the Macri government intends to pass a counter-reform of the labour law that would destroy rights the Argentinean labour movement has won over decades of struggle. The government is preparing by attempting to behead the leadership of the movement against it. The workers’ movement and the left must respond in a unified fashion, organising a joint struggle against repression, against the anti-worker measures of the government and against the trade union bureaucracy that has allowed them to be passed.

We call on left-wing, solidarity and labour movement organisations internationally to take up the cause of the comrades suffering repression in Argentina. An injury to one is an injury to all!