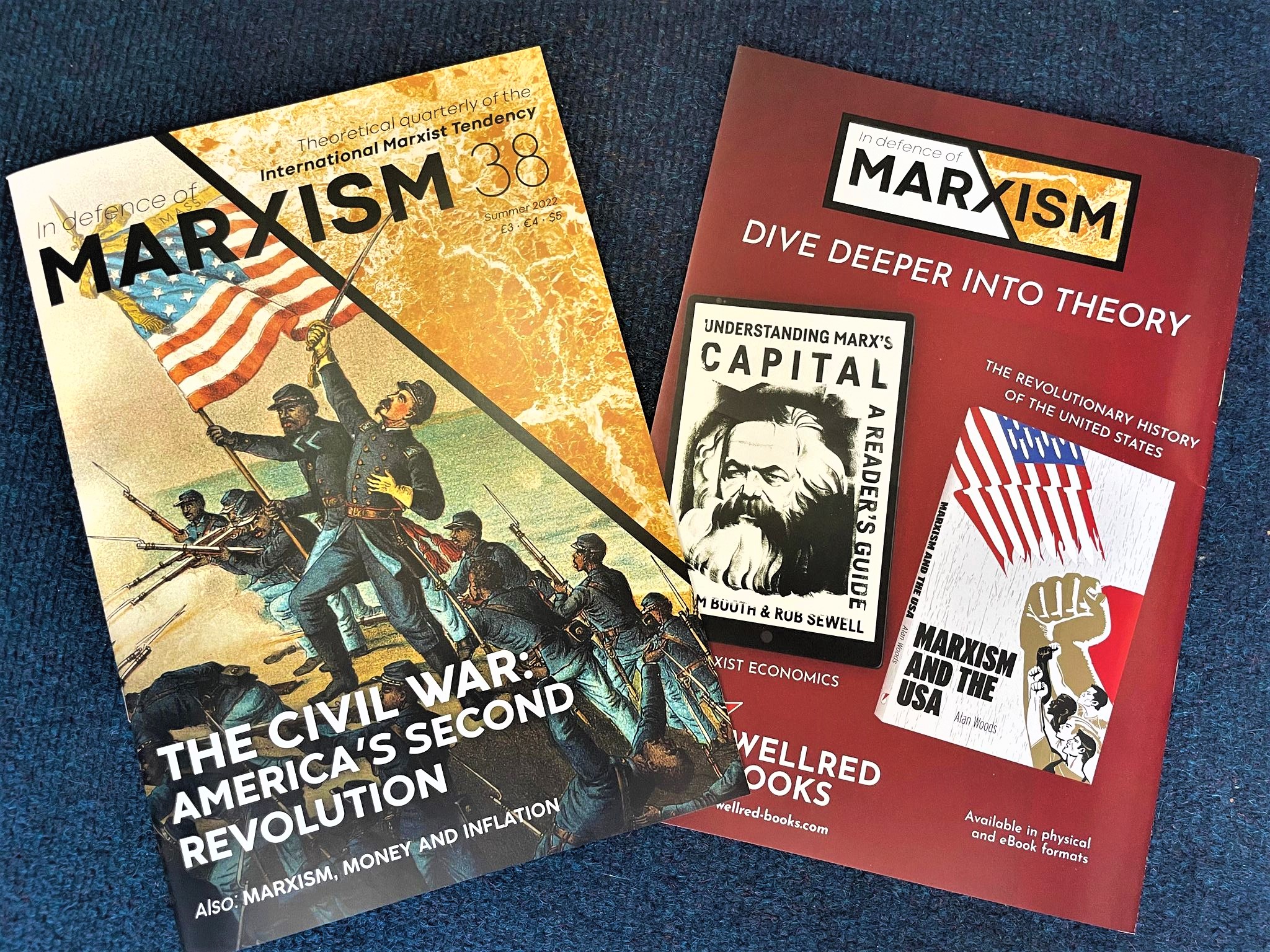 The International Marxist Tendency is delighted to announce the Summer 2022 edition of the In Defence of Marxism theoretical journal! This latest issue features two in-depth examinations of topics which all Marxists would be well served to study and understand: the American Civil War, which Marx himself commented upon, and Marxism, Money and Inflation, the relevancy of which is plain for all to see. We publish the editorial by editor-in-chief Alan Woods below.

In this issue of In Defence of Marxism, two articles will occupy the entirety of the magazine. We offer no apologies for this, since both these articles deal with questions that are of exceptional interest and, for different reasons, have recently acquired even greater relevance than heretofore.

I refer to an extensive study of the American Civil War by New York-based Marxist John Peterson, and a timely article on inflation by comrade Adam Booth.

Marx and Engels on war

I was recently re-reading the correspondence of Marx and Engels, which occupies about a dozen volumes of the Collected Works, and is a real goldmine of information on all kinds of matters: philosophy, economics, politics, and even the personal lives of these two great men.

One thing that struck me was the truly encyclopaedic knowledge they possessed on a vast range of subjects, including military affairs.

Napoleon once remarked that war is the most complicated of all equations. All the more valuable then are the profound insights that the founders of scientific socialism showed, not only in relation to the Napoleonic Wars and the Crimean War, but also to both the American Civil War and the subsequent Franco-Prussian War that led to the Paris Commune – the heroic uprising of the French workers that led to the creation of the first workers’ state in the world. 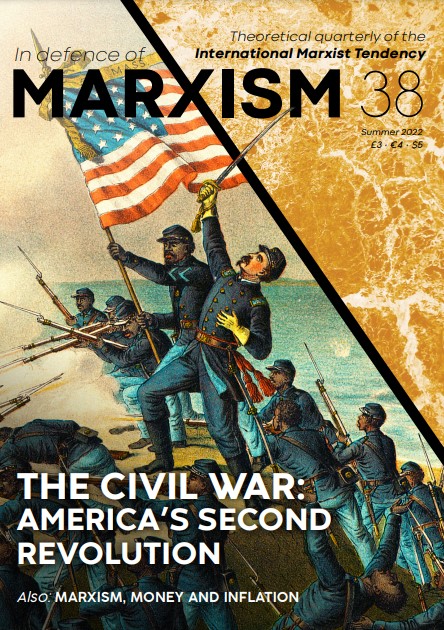 Among the fascinating letters of Marx and Engels on this subject, I found the following remarkable extract, written by Marx on 6 May 1861, when the first shots of the Civil War had only just been fired. This is what he wrote:

“[...] Here in London there is great consternation over the course of events in America. The acts of violence which have been perpetrated not only by the SECEDED STATES, but also by some of the CENTRAL or BORDER STATES — and it is feared that all 8 BORDER STATES, namely Virginia, Kentucky, Missouri, North Carolina, Tennessee, Arkansas, Maryland, and Delaware, will side with the secessionists — these acts of violence have rendered all compromise impossible.

“There can be no doubt that, in the early part of the struggle, the scales will be weighted in favour of the South, where the class of propertyless white adventurers provides an inexhaustible source of martial militia. IN THE LONG RUN, of course, the North will be victorious since, if the need arises, it has a last card up its sleeve in the shape of a slave revolution […]”

In these few highly concentrated sentences, the genius of Marx was able to predict with uncanny prescience the whole process of the war and its outcome. For, as John Peterson points out, the essentially revolutionary character of the war only emerged clearly with Lincoln’s decision to announce the emancipation of the slaves, which dramatically changed the whole direction of events.

It is, of course, not my intention to develop this idea any further. That purpose is well served by the article which we now offer our readers.

To return to the Marx-Engels Correspondence. The exchange of letters on the Crimean War, to cite just one example, reveals a detailed knowledge of tactics and strategy and also a close examination of the minutiae of every major battle, troop movements and so on.

How I envy them! Nowadays, it is extremely difficult, not to say impossible, to obtain accurate information about the ongoing war in Ukraine. Instead of facts, we are daily subjected to an unprecedented barrage of brainless propaganda, the purpose of which is not to provide accurate information about the state of hostilities, but precisely the opposite.

In such conditions, any analysis of the war must necessarily be reduced to an educated guess. The old saying is yet again shown to be correct: the first victim of war is the truth. But of one thing we can be sure. By the time you read these lines, the hollowness of the West’s boastful propaganda about the inevitability of a Ukrainian victory will have been exposed for the hypocritical fraud it always was.

And it will be the poor people of Ukraine who will pay the price for Washington’s cynical game of turning them into cannon fodder in an attempt to weaken its Russian enemy.

War hysteria and the impotence of the “Left”

The present conflict in Ukraine has unleashed a furore of counterrevolutionary hysteria. The deafening beat of the war drums has temporarily drowned out any semblance of reason. Public opinion has been stampeded into line and the most reactionary elements are triumphant.

Arm yourself with revolutionary theory in the fight to overthrow capitalism and dive into
TWO extensive articles on 'The Civil War: America's Second Revolution' and 'Marxism and Inflation'.

That is the picture that presents itself at present. It is one that fills what used to be called the Left with feelings of unadulterated gloom and despair. Everywhere they see only blackness and defeat. It reminds one of the words of Edward Lear:

“There was an Old Man of Cape Horn,

“Who wished he had never been born;

“So he sat on a Chair till he died of despair,

“That dolorous Man of Cape Horn.”

Such moods are quite natural for those slavish worshippers of the established fact, who cannot see further than the ends of their nose. They have not the slightest acquaintance with dialectics, which teaches us that everything that exists deserves to perish. In other words, things change into their opposites. And if it is true (of course, it is) that wars have a definitely destructive and reactionary side, it is equally true that wars frequently bring about the conditions for revolution.

Why should the present war be any different?

The consequences of the war in Ukraine are only now beginning to be felt on a world scale. They will be utterly devastating. To look no further, the delicate fabric of world trade, which was only just recovering from the effects of the pandemic, is being ripped apart violently by a murderous combination of war and economic sanctions (which are merely an expression of economic warfare).

Millions of people are facing death by starvation – not only because the Russians are blockading Ukrainian exports of wheat with warships, but also because the West (and this is conveniently forgotten) is blocking the export of Russian wheat through American sanctions.

Everywhere there is a cost-of-living crisis, not entirely caused by the war, but certainly exacerbated by it. Inflation, which the stupid bourgeois economists had thought to be a thing of the past, has returned with a vengeance, depressing living standards, destroying the value of savings, ruining small businesses and disrupting economic life. Yes, war is very good for the arms manufacturers, but not so good for the rest of the capitalist class, and certainly not for society at large.

Inflation and the impending crisis

For a long time, the Keynesian idiots thought that crises of overproduction could be solved by the simple expedient of increasing government spending (including wasteful spending on arms). The monetarists pointed out that this must sooner or later lead to inflation. The Keynesians retorted that the monetarists’ policies must lead immediately to a slump.

The real explanation for crises and inflation is provided by Marxist economics, and comrade Adam Booth has done us a great service by summarising the arguments of the bourgeois economists and exposing their inner contradictions.

The present crisis has cruelly exposed the bourgeois myth that the old cycle of inflation and deflation has finally been abolished and we have entered a new period of prosperity based on a combination of low unemployment, low inflation and low interest rates.

Now suddenly they are singing a different song. The uncontrolled spiral of inflation inevitably signals a rise in interest rates, which indicates that the world economy is now rushing headlong into what promises to be a deep recession.

In place of the promised capitalist paradise, the perspective facing millions of workers is one of falling living standards and soaring unemployment. And as sure as night follows day, these facts will be expressed in even greater social and political instability, leading to an intensification of the class struggle everywhere.

Not one stone upon another will be left of the stupid illusions of the bourgeois and their reformist hangers-on. In one country after another, revolutionary possibilities will open up before us. And to those sorry ‘Lefts’ who have long ago abandoned any idea of fighting to change society, we answer with the words of Berthold Brecht:

“He who fights may lose. But he who doesn’t fight has already lost.”