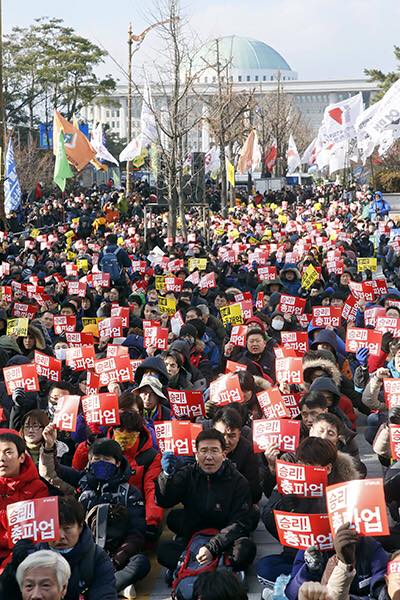 Yesterday’s general strike in South Korea was another clash in the ongoing battle between the right-wing President Park Geun-Hye and organized labour.

The strike yesterday was the third partial general strike of this year, with the first on April 24 having 240,000 participants and the second on July 15 was smaller with some 45,000 participants.

Yesterday’s general strike did not see such a strong level of participation as the previous strikes this year. About 74,000 workers from 26 unions in 16 provinces responded to the call from the KCTU and came out for two to four hours. 17,000 unionized workers took part in demonstrations. Workers from major companies such as Hyundai Motor and Kia Motors also participated. 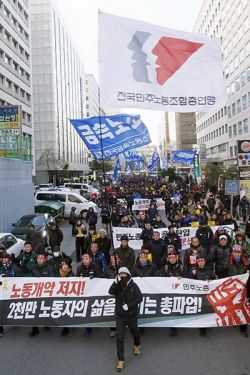 The government has been trying to undermine the strike and scare people from taking part in the strike: “The Dec. 16 walk-out is clearly politically oriented and illegal,” the Labour Minister Lee Ki-kwon said Monday. On the other hand the KCTU said in a statement that they were ready for further action and an all-out strike at the beginning of the new year.

The general strike was called by the second-largest and most radical of the two big umbrella labour unions in South Korea, the Korean Confederation of Trade Unions (KCTU). This was first and foremost a response to the regressive labour laws that President Park, daughter of a former dictator, is trying to introduce, which among other things will worsen conditions for older workers and make it easier for the bosses the lay off workers.

However, these attacks on labour and the response from the unions is not a new thing. As we have explained, the struggle between organized labour and the government has been going on for a while.

The struggle has been really intense and bitter since the big demonstration on November 14 where 130,000 people took to the streets. This was the biggest demonstration in South Korea in seven years.

Since then the Park government has fiercely cracked down on the unions. Their headquarters have been raided and unions officials have been arrested by the police. It culminated on December 10 when the President of the KCTU gave himself up to the police after been hiding in a Buddhist temple.

These actions are further steps in President Park’s path towards reducing democratic rights and imposing authoritarian rule, which reminds one of her father’s methods. Among other things, she is trying to change the law so she can be reelected. She has banned opposition parties and is trying to rewrite the history books in favour of her father.

Under capitalism, the future for the masses in South Korea is looking bleak. Ever since the world crisis of capitalism broke out in 2008 the South Korean economy has been growing slowly, and now with a decline in the growth in the Chinese economy, South Korean exports have been hit hard.

Even though the overall level of unemployment is not very high, among young people unemployment is about 8% and is destined to increase further with the decline in the South Koreans economy.

Yesterday’s general strike, however, will not make President Park change her mind. She will continue with the attacks on the unions and will increase repressive measure. It is necessary for the KCTU to broaden out the struggle against the government, both by involving more unions and workers, but also by politicising the whole struggle against the reactionary government through the affiliated Labour Party. The next logical step should be to call a real all-out 24-hour general strike, that would serve to raise the awareness of the  working class of who are the real masters of society.