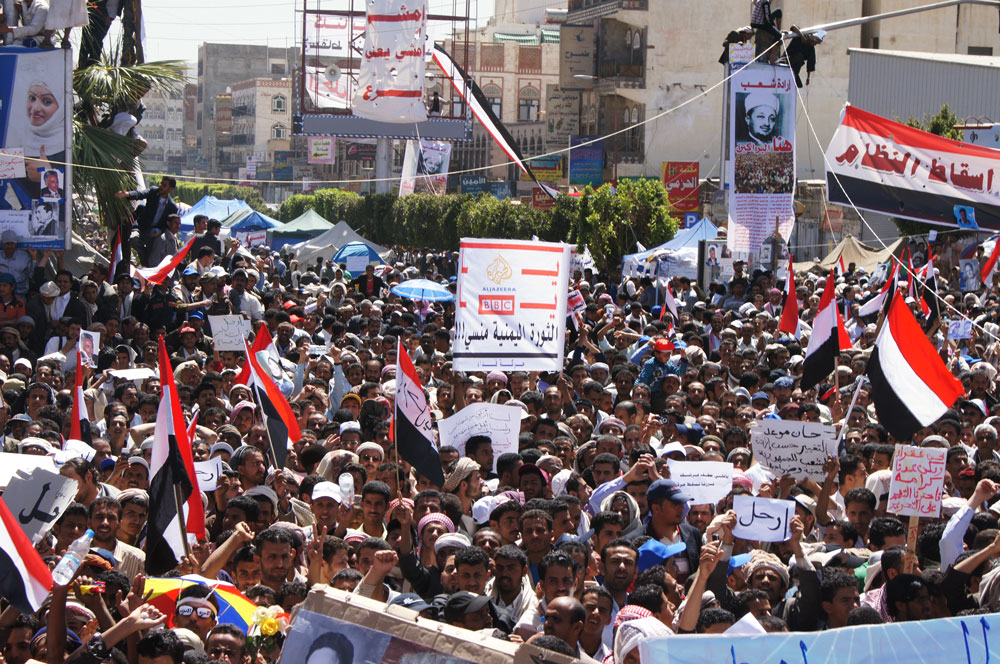 Following the regime’s brutal massacre of protestors on Friday, March 18, the revolution has moved forward in Yemen. The state apparatus has split, and most of the army has turned against President Saleh. After the repression failed to achieve its objectives, the ruling elite and the imperialist powers are desperately trying to find a “safe” alternative. But that will not stop the revolution.

While the imperialist intervention in Libya is dominating the headlines, the revolt in Yemen, and its implications for the Persian Gulf area, is of perhaps greater strategic consequence for the imperialists. In neighbouring Saudi Arabia, the reactionary monarchy is already feeling the hot breath of the revolution on its neck, and the regime has deployed forces in Bahrain in an effort to crush the revolution and stop it from spreading to the heartland of the Arabian Peninsula.

The turning point in Yemen’s revolution occurred on March 18 after Friday prayers, when the revolutionary people in the streets called for President Ali Abdallah Saleh to leave. A brutal crackdown followed. Snipers hidden on rooftops opened fire on the crowds gathered for prayers outside Sana'a University, leaving 52 people dead and hundreds wounded. Scenes of chaos were reported at the makeshift hospital that the demonstrators set up within their camp.

Since protests began in late January, Saleh has tried to quell the dissent with concessions. He raised salaries and said he would step down when his term of office ends in September 2013. In recent weeks he has been trying to negotiate with the opposition, going so far as to offer a deal that would give more power to parliament and local authorities. But this did not work, and out of desperation, the regime – imitating the Gulf States’ repression in Bahrain – decided to take the road of brutal repression. Now, after the brutal massacre on March 18, negotiations are out of the question. The Rubicon has been crossed. This marks the end for the Saleh regime.

President Saleh has threatened the Yemeni people that any “coup” against him would lead to “bloody civil war” in this poverty-ridden country. This is the same argument used by Mubarak before his exit from power. According to Gregory Johnsen from Princeton University, “most Yemenis are no longer buying this argument.” To Al Jazeera English, he added: “What comes next in Yemen will be determined by the style and timing of Saleh’s exit. The question is whether he steps down peacefully, hands over to a transitional government, or digs his heels in and refuses to go, which will lead to violence.”

Although Saleh, who has ruled Yemen since 1979, has offered to step down by the end of this year (a case of too little and too late), there are certainly indications that Saleh will not step down without a ferocious fight. On Wednesday, at the behest of President Saleh, the parliament passed sweeping new emergency laws. The emergency law, last evoked during Yemen's 1994 civil war, suspends the constitution, allows for greater media censorship, bans street protests and gives security agencies arbitrary powers to arrest and detain suspects without judicial process.

President Saleh’s position is starting to look increasingly fragile and it appears that the remaining amount of support left for him might be reaching critical levels.

A wave of military defections on Monday and Tuesday has left Saleh with only the loyalty of elite forces commanded by his son and nephews, many of them trained and equipped by the US. One of the prominent defectors is General Ali Mohsen al-Ahmar. This individual has been engaged in back-channel talks with Saudi Arabia, who happens to be one of Saleh’s leading benefactors. These negotiations, however, failed to yield a clear transition of power. The Saudi rulers have traditionally viewed Yemen as their country’s strategic backyard.

Mohsen is one of the country’s richest men, an influential member of Yemen’s old guard, and his defection from the president has led to a massive wave of defections. Armoured vehicles under Mohsen’s command surrounded the presidential palace, where the Republican Guard units under control of Saleh’s son, Ahmed, had taken up defensive positions. Forces loyal to the president have clashed with regular army troops in the eastern town of Mukalla.

Mohsen is positioning himself for Saleh’s inevitable exit. He is a veteran of the old guard and in the 1980s he worked with Saleh to defeat the “socialist” People’s Democratic Republic of Yemen in the South. In the 1994 civil war, he enlisted veteran Jihadis who had fought in Afghanistan to fight the “socialist” south, re-introduce landlordism and roll back all the progressive reforms that the nationalised economy had been able to offer. A western diplomat told the Wall Street Journal that the general has been “always sort of in the shadows as the back-up dictator,” and that even in the case of Saleh’s exit “you could have a Yemen that looks a lot like Yemen.”

For Saudi Arabia, the general is a “safe” alternative to the revolution. There is just one small problem: the revolutionary people, once brought to their feet, will not easily be satisfied with cosmetic changes and a “Yemen that looks a lot like Yemen”. On the contrary – they are fighting and dying for a Yemen that looks completely different form the Yemen of today – the Yemen of misery, of poverty, of tribalism, of dictatorship, of national subordination to imperialism. The revolutionary people want radical change, and they will not be satisfied with General Ali Mohsen al-Ahmar in the place of Saleh.

For the 23 million people of Yemen, life is becoming intolerable. Unemployment is around 40 percent, and for the youth the situation is even worse. The regime has failed miserably in meeting the most basic needs of the people. Many children are suffering severe malnutrition as a result of food price hikes and limited access to food. This is especially the case in the impoverished northern governorates of Yemen, particularly Saada.

The IMF-imposed “reforms”, i.e. attacks on welfare, in Yemen since unification have proved to be a catastrophe for the masses. Instead of full employment, Yemen now has an estimated 40 percent unemployment.

Among the IMF dictates, we find a “general sales tax” which has whittled away at the purchasing power of the masses, as well as a 75 percent cut in fuel subsidies and other attacks on living standards. Although the government has not been able to carry out all the attacks because of fear of the masses’ reaction, living standards have been under constant attack.

Due to the geography of Yemen – most of the country is desert – it is impossible to develop the country as long as it is isolated and dominated on the one hand by feudal relations and a weak, low-capital intensive productive sector, and on the other hand by world imperialism and regional reactionary powers such as Saudi Arabia and the Gulf States.

The position of US imperialism

For years the Saleh regime has used the so-called “war on terrorism” to get funding from Washington and to crack down on opposition groups – namely the rebellious Houthis in the north and the southern separatist movement (harakat al-janubiyya).

The Obama administration has more than doubled US military aid from $67 million in 2009 to $150 million in 2010. Embarrassing State Department documents released via Wikileaks show that US aid has been directed at helping the fight against the regime’s domestic opponents with the knowledge of CENTCOM commander General David Petraeus and, thus, all the major power centres in Washington. The scope of US assistance to the Yemeni regime falls far short of the billion-dollar contribution to the Mubarak regime in Egypt, but its unpopularity and its purpose in suppressing all the rights of the people, links the protests in both Yemen and Egypt.

Who is the opposition?

The protests are not led by any established parties. The Joint Meeting Parties (JMP) is an umbrella for Islamist, Socialist, Nasserist and other smaller parties, and has been in existence since 2002. It also includes the Yemeni Socialist Party (YSP) – still somewhat popular in the south, where it was once the ruling party. However, the coalition leaders’ efforts to present the JMP as a “loyal opposition” are in clear contradiction to the open revolt on the streets. The JMP has not put forward any clear programme for change, which is perfectly natural due to the heterogeneous nature of the alliance.

The Islamist party of Islah has its deepest roots in the north. For most of the 1990s, many Yemenis viewed Islah less as an opposition party than as a wing of the ruling General People’s Congress, given its northern origins and its social conservatism. But as the largely southern Yemeni Socialist Party declined in influence following the civil war in 1994, Islah was less essential to the regime and less able to achieve its goals through collaboration with Saleh.

Islah moved steadily toward the other opposition parties, though some within Islah’s leadership have shown somewhat more flexible loyalties, particularly al-Zindani, leader of the party’s most conservative element and a close ally of Saleh. As Islah assumed a prominent role in the JMP, however, Zindani’s clout eroded and a cadre of the Muslim Brothers, with a more oppositionist bent, came to the fore, building alliances with members of other parties on the basis of professional associations and, for many, common experiences as student activists. These more liberal Islamists are the men and women who form the core of the JMP leadership.

Yemen in the Arab revolution

The Saudi rulers are alarmed by the Yemeni revolution because of the effect it is having across the entire region – and inside Saudi Arabia itself. The reactionary rulers have reacted to the revolution in Bahrain by sending in troops, but repeating this will not at all be easy in the case of Yemen. Even if Riyadh wanted to deploy its armed forces to save the regime, it would prove much more difficult than sending troops across a causeway to Manama.

The bulk of the Yemeni army has now defected from the regime. Tomorrow, Friday, March 25, will be the next test, and it is quite possible that Saleh will be forced to leave. This, however, will not spell the end of the Yemeni revolution. On the contrary, it is just the beginning. The revolutionary people will not be satisfied with corrupt and rotten leaders like Ali Mohsen al-Ahmar. Such leaders will promise a lot, but deliver very little, if anything.

If the burning problems of the Yemeni workers, youth and poor are to be solved, the former nationalized industries in the South must be re-nationalized, and all wealth belonging to the Saleh regime must be made the property of the people; that is to say that the bulk of the economy must become public property. All this must be under direct control of the revolutionary people. The army rank and file must join up with the youth and the workers and organize to defend the people’s revolution and protect it against corrupt generals and leaders who have only recently defected from the Saleh regime.