On Thursday, November 27, in the evening, three trade union leaders were assassinated in Aragua, Venezuela. The International Marxist Tendency condemns these brutal killings of workers' leaders whose only crime was to stand firm in the defence of workers' interests against the intimidation and terrorism by the capitalist class. We call on the international workers' movement to mobilise against these killings and demand that those responsible be identified and brought to justice.

On Thursday, November 27, in the evening, three trade union leaders were assassinated in Aragua, Venezuela. Richard Gallardo, chair of the Aragua Region of the UNT, Luis Hernandez, chair of the union of Pepsi-Cola workers, and Carlos Requena, were having something to eat at La Encrucijada, and when they returned to their vehicle they were killed by a gunman who arrived on a motorbike. The three trade union leaders had spent the whole day giving support to the struggle of 400 workers at the Colombian-owned Alpina dairy processing plant. 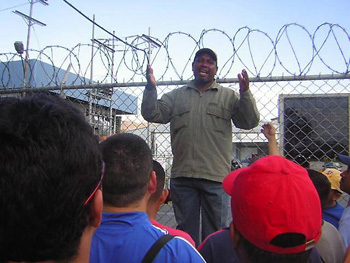 The workers had occupied the Alpina plant, demanding the payment of their wages and fighting against attempts by the multinational to close down the factory. That same morning they had been faced with brutal repression on the part of the regional police. The three trade unionists had coordinated with workers from other nearby factories who had come out in protest and reinstated the Alpina workers to the installations, demanding nationalisation under workers' control.

The regional governor of Aragua, Didalco Bolivar, was elected on a Bolivarian ticket, but together with his party (Podemos) joined the reactionary opposition in the run up to the constitutional reform referendum in 2007. He had close ties to business interests in the state and had on repeated occasions used police repression against workers' struggle to defend the interests of the bosses, as for instance when Sanitarios Maracay workers were travelling to a Freteco demonstration in Caracas in April 2007. He lost his position as a governor to PSUV candidate Rafael Isea at the November 23rd elections.

The modus operandi of the killers is the same as that is used by paramilitaries, hired by the bosses, in Colombia to intimidate and assassinate trade union leaders and organisers. Colombian paramilitaries, linked to the Venezuelan oligarchy, have been present and active in Venezuela for some time.

On learning of this news, the Aragua UNT immediately called for a day of protest action with mass meetings in all the factories and workplaces. Thousands of workers downed tools and came out on the streets in the afternoon of Friday, November 28. Thousands also attended an angry funeral procession on Saturday, November 29 and organised road blockades in Aragua and Carabobo.

The Aragua UNT organised an emergency regional meeting, which agreed on a plan of action starting on Monday December 1st, including mass meetings in all shifts in the region's workplaces, a regional strike on Tuesday December 2nd and a national day of action on Wednesday, December 3rd.

Speaking at that meeting, Orlando Chirino, national coordinator of the UNT, called on workers to respond to any threats on the part of the bosses by "occupying the factories and demanding expropriation by the government". This is something for which Revolutionary Marxist Current (CMR) and the Revolutionary Front of Occupied Factories (Freteco) have been arguing for some time and which they repeated in their statement in condemnation of the killings.

The International Marxist Tendency condemns these brutal killings of workers' leaders whose only crime was to stand firm in the defence of workers' interests against the intimidation and terrorism by the capitalist class. The basic principle of the workers' movement is "an injury to one is an injury to all". We send our solidarity to the families, friends and comrades of Richard Gallardo, Luis Hernandez and Carlos Requena, and we call on the international workers' movement to mobilise against these killings and demand that those responsible be identified and brought to justice.

These killings take place in the context of a wave of provocations on the part of reactionary gangs in those states and local municipalities where the opposition won the elections on November 23rd. As we have warned in the past, the oligarchy in Venezuela has only been compelled to concentrate on the electoral front because the balance of forces is not favourable for another coup right now. But as soon as they get hold of positions of power they will shed their "democratic" mask and show their real reactionary face. This, to a certain extent, has already happened.

There are numerous reports of reactionary thugs attacking and threatening Cuban doctors, alternative radio stations, people attending the educational and health care plans of the Bolivarian revolution, buildings used by communal councils and other revolutionary organisations, etc. These attacks are happening particularly in Miranda, Carabobo, Táchira (all states where the opposition won the elections) and in place like Maracaibo (where the opposition won control of the local council).

In an extremely angry speech on Sunday, president Chavez gave numerous examples of such attacks which have been very well documented. The international media, in a concerted effort to present him as an authoritarian megalomaniac (despite all the evidence to the contrary) has chosen to dismiss these reports. Thus, in the British Guardian, Rory Carroll wrote "Chávez sought to turn those gains against the opposition by claiming its governors and mayors had revealed ‘fascist' tendencies even before they had been sworn in. He alleged they were undermining free clinics and schools. The opposition said that was absurd, since it was elected on the promise of improving public services."

In fact, Chavez, in his speech detailed a long list of attacks against health clinics and educational programmes. Here are some of them: 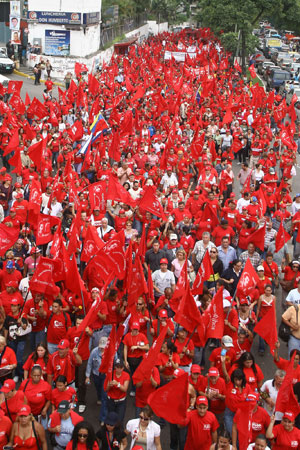 In his speech on Sunday, quoting from Karl Marx, Chavez correctly said "what we are witnessing in Venezuela is an expression of the class struggle, the poor against the rich, the rich against the poor". He added that these attacks are just "a small example, an indication of what would happen if these counter-revolutionary opposition parties would ever take power in Venezuela." Chavez appealed to the people to be in "permanent mobilisation against counter-revolution".

Action is needed: arm the workers! Expropriate the oligarchy!

These speeches need to be transformed into action. If this is a class struggle, the only way to settle it is by wresting political and economic power away from the reactionary oligarchy (the capitalists, the landlords and the bankers). The killings in Aragua show what the bosses are capable of in defence of their interests, power and privilege. But that was not an isolated incident. In the last ten years, more than 100 peasant activists have been killed in the struggle for land reform and other revolutionary activists have been killed in the cities and the countryside. Yet, no one has been brought to justice. Those who plotted the reactionary military coup in 2002, and the criminal bosses lock out of the same year, still walk free through the streets of Venezuela plotting new reactionary actions against the democratic will of the people. Some of them even stood in the democratic elections of November 23rd and won!

As the statement of the CMR and Freteco correctly points out, and as the Aragua UNT has also now raised, the workers need to organise their own self-defence. When president Chavez appealed to every man and woman of the people to learn how to use a rifle in order to participate in the defence of the revolution, none of the different wings of the leadership of the UNT took up the call into the factories. Now this has become an urgent task.

At the Inveval factory (running under workers' control), the workers have already set up a unit of the reserve force of the army and are discussing leaving a permanent guard in the plant to defend it against any possible attacks. This is particularly important since Inveval is located in Los Teques, Miranda, which now has a reactionary governor, Capriles Radonsky, who was responsible for the assault against the Cuban embassy during the April 2002 coup.

This should be repeated in factories and workplaces around the country. The workers should organise their own self-defence, no one will do it for them. The UNT leadership should call for a national day of action, including factory occupations, and demand the expropriation under workers' control of the main parts of the economy that remain in private hands. This is the only guarantee for the victory of the revolution. This is no time for hesitation. The revolution has not been defeated. It should now be completed through the expropriation of the capitalists and the landlords and the destruction of the capitalist state.