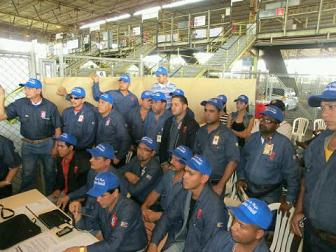 At half past one in the morning, the results from the trade union elections at SIDOR were announced, the huge iron and steel plant in the city of Puerto Ordaz (Guayana, Edo. Bolivar). In a competition characterised by a hard-fought margin amongst the candidates, José Luís Hernández of the Revolutionary Orinoco Movement was re-elected as the president of SUTISS (The Union of Workers in the Iron and Steel Sector).

Published by the electoral committee, the final results for the three main candidates were as follows:

The first thing that we should emphasise is that the two slates with the most votes, numbers 11 and 2, both belong to the United Socialist Party of Venezuela (PSUV). Without counting the other slates that define themselves as revolutionary out of a total of 11 candidates in these elections, these two candidates alone gained a majority of 50.93% of the total vote.

This shows that SIDOR workers, independently of which of these two candidates they prefer, are clearly revolutionary and opposed to any opposition current. Furthermore, it shows a huge level of support for the nationalisation of the plant, which has been under state control since the heroic struggle in 2008, dignifying the lives of workers and achieving substantial improvements in a whole series of social and economic areas.

The SIDOR workers know that to defend the revolution is to defend the palpable victories that have been obtained, and for that reason, the absolute rejection of any plan to return to the past under the transnational company, and the implicit attacks against the working class that this would entail.

The winner of these elections, José Luis Hernández, has been elected as president of the union for the second time. His movement is linked to the PSUV, but some have criticised his management as president, claiming that he has not strong enough in defending workers demands.

In fact, this time the competition was so tight that everyone was holding their breath until the count at 11 pm, when the votes were counted in Hot Lamination – where Melendez was swept to victory – and then in Tavsa (Steel Pipes Venezuela company), where some votes for Acarigua paralysed Melendez’s vote and gave the final victory to Hernández, who won by just 51 votes.

A Rejection of Bureaucracy

It is also necessary to point out that the re-election of José Luís Hernández represents the workers’ resounding rejection of the attempts by the reformist bureaucracy in the government to meddle in the elections and favour a particular candidate.

The Union Alliance, linked to the “Socialist Tide” current within the PSUV, is a collective that without a doubt contains many honest workers - revolutionaries who are committed and want to fight for a genuine change in society. However, the role which its leadership played in these elections has been lamentable.

As well as confronting the company’s management, presided over by Carlos d'Oliveira, which is trying to form workers’ councils in each department and attempting to keep implementing workers’ control, the leaders of Union Alliance kept quiet and refused to assume a clear political position in the month of June when Luis Velasquez, the so-called “King of Steel Bars”, was arrested for leading a mafia network through his position as marketing manager.

Only a week before the elections, José Meléndez and Cruz Bello from the Union Alliance met with Vice-president Elias Jaua, the Minister of MIBAM (Basic Industries), José Khan, and the Minister of Labour, Maria Cristina Iglesias, in order to “discuss the pending debts owed to Sidor workers”.  A photo of the said meeting was published in Aporrea (Venezuelan revolutionary news website), with the government ministers showing themselves effectively as the official representatives in the elections.

The bureaucracy thought that a simple economic concession – the payment of 33 months back pay owed to the workers – was going to be sufficient  for them to impose the candidate that they preferred as the president of SUTISS. But contrary to popular belief, the workers in Guayana are not just after “a piece of silver”, and they know that the bureaucracy doesn’t do favours for free.

Towards the Deepening of Workers’ Control

In an interview which we recently published with comrade worker-president, Elío Sayago, of ALCASA, he revealed how a there is a sustained campaign within the MIBAM Ministry of Basic Industries and Mining, alongside the Minister of Labour and the Vice-president, to undermine workers’ control in the region. Within this context, it is extremely serious that José Meléndez has yielded and entered into the game with the same individuals who are sabotaging workers’ control. It was this that cost him victory.

The only way of deepening workers’ control is through revolutionary democracy from below. The extension of workers’ councils throughout SIDOR and the strengthening of assemblies to discuss existing problems within the plant is now urgent.

In order to break the siege, it is further necessary to link the struggle for workers’ control in Guayana to the struggle to radicalise the revolution. The working class needs to organise itself within the Great Patriotic Pole, and above all within the PSUV, in order to advance their own demands and programme and to take back those spaces as real tools for the revolutionary struggle.

If the bureaucratic sabotage against the Socialist Guayana Plan continues, the completion of the Great Housing Mission will be in danger and consequently the very re-election of president Chávez in 2012. The workers, with Guayana at the vanguard, will fight with all their energy and sacrifice in order to prevent such an outcome.

Translated by Rachael Boothroyd for Venezuelanalysis.