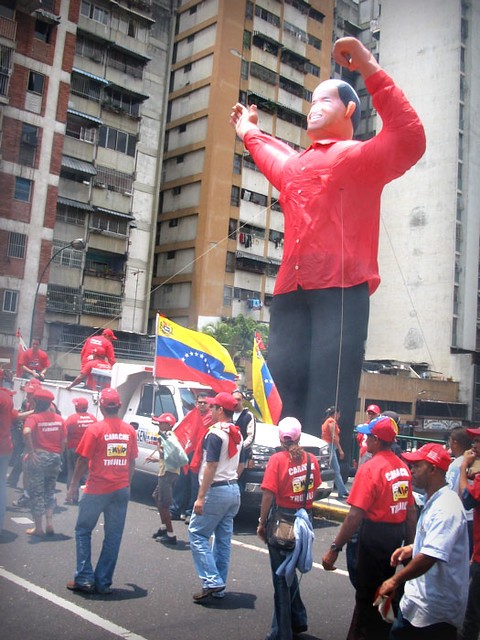 Six years after the coup against the democratically elected government of Hugo Chávez was defeated by the magnificent mobilization of the masses, the contradictions within the Venezuelan revolution are as sharp as ever.

On March 2nd, delegates to the founding congress of the Venezuelan United Socialist Party (PSUV) returned home after a two month long discussion period. On March 10th the Bush administration in the United States threatened to add Venezuela to its list of "nations that support terrorism". On April 9th, president Chávez announced the nationalisation of the massive SIDOR steel mill, siding with the workers in their 15-month long struggle with Argentinean multinational Techint.. An analysis of these three events provides us with a clear picture of where the Venezuelan revolution is at, the dangers it faces, and which is the way forward.

The building of the PSUV was proposed by Chávez immediately after the victory in the presidential elections of December 2006. The Bolivarian revolution has for a long time faced a contradiction: on the one hand it has derived its strength from the massive mobilization and support of the masses of workers and peasants organized in thousands of different organizations (land reform committees, revolutionary trade unions, Bolivarian circles, neighbourhood groups, etc.), but on the other hand it lacked a nationwide democratic revolutionary organization through which they could express themselves politically. The Bolivarian parties that stood in past elections were rightly regarded by the masses as no more than electoral machines controlled by unelected and unaccountable cliques of bureaucrats, careerists, corrupt local and regional politicians, etc.

Every time the masses of workers and peasants were given a channel to organize and take the reigns of the revolution they took it with both hands. A million and a half joined the Bolivarian circles at the end of 2001. More than 2 million were organized in the Electoral Battle Units during the recall referendum in August 2004. But also, every time they tried to coordinate their efforts at the neighbourhood, local and regional levels, the bureaucracy and the reformists blocked them. Thus, when president Chávez made a call to form the PSUV, and for this to be "the most democratic party in the history of Venezuela", the masses correctly understood this as an appeal to get rid of the bureaucracy which is acting as a brake on their revolutionary initiative.

In just two months in early 2007, 5.6 million Venezuelans – women, youth, workers, peasants, and unemployed – registered to join the PSUV. 1.8 million of them attended regular weekly meetings of their local Socialist Battalions. This was extraordinary. Once again, the Bolivarian masses had responded. But, as we warned at the time, the fate of the PSUV could not be determined in advance. It would be the result of a fierce struggle between the revolutionary left of the movement and its reformist and bureaucratic sectors.

During six weekend sessions, more than 1,600 delegates met to discuss the declaration of principles and statutes of the new party. The clash between left and right was evident from the very beginning. On the first day of the congress a majority of delegates asserted their will to have control over the proceedings by protesting that they had not been consulted on the agenda or the order of the discussions. This was the mood that prevailed throughout the congress and which was reflected in some of the decisions and votes that took place. For instance, the PSUV declared itself as an anti-capitalist party, based among other principles on those of scientific socialism, and having among its guiding figures those of Marx, Engels, Lenin and Trotsky. The fact that the congress delegates met over six different sessions allowed the left wing, which at the beginning was atomised, to become more coordinated. Most of the delegates were representatives of this layer of "natural leaders" at the local and neighbourhood level, and here they had a chance, for the first time, to get to know each other, to exchange experiences and discuss ideas.

On March 9th some 80,000 members of the PSUV participated in the first internal elections to select a provisional national leadership composed of 15 full members and 15 alternates. Despite the fact that known figures, many of them from the old Bolivarian parties, made up the bulk of those elected, there were a number of significant surprises. Diosdado Cabello, who had emerged during the congress as the main representatives of what in Venezuela is called the "home grown right wing" of the movement, did not make it onto the list of 15 full members, despite being well known and having played a prominent role throughout the congress. It was a clear vote against the right wing and against bureaucratic methods within it.

A whole number of other prominent governors, local mayors, etc., did not make it into the list of 30 who were elected. Many of those elected were those considered to be more left wing, less connected with political party apparatuses, more removed from the bureaucracy, etc. Others clearly identified with the revolutionary left of the Bolivarian movement, missed election only narrowly. The cut off point was set at 12,000 votes and several prominent left-wing candidates all got more than 10,000. Freddy Navas, a supporter of the Revolutionary Marxist Current (CMR) received 9,000 votes standing on a clear Marxist platform. Navas explains how the political discussions and the votes both "reflect a high level of consciousness amongst the members of the party, an iron will to take the revolution forward and a clear search for a revolutionary left wing alternative".

After the defeat of the constitutional reform referendum in December 2007, the oligarchy realized that their tactics had worked. They had applied massive pressure on the economy, with a campaign of sabotage of the food distribution chain and had managed to push a significant number of chavista supporters to abstain. They are not strong enough to make open war or military intervention a part of their agenda at the moment, so they hope to gradually wear down support for the revolution through a relentless campaign in the media, international pressure, economic sabotage, etc., and to win some institutional spaces in the November regional elections.

Colombia's recent incursion into Ecuador to kill the FARC guerrillas' second-in-command had a clear aim: to stop the process of humanitarian negotiations which was increasing the prestige of Chávez in Colombia and putting president Uribe in an increasingly embarrassing position. The attack, a violation of Ecuador's national sovereignty, and carried out with support from US forces based at Manta in Ecuador, also aimed to paint Venezuela as a "terrorist-aiding" country. During the raid, Colombian forces allegedly recovered a laptop containing information linking the FARC with an attempt to make a "dirty bomb", and linking Venezuela and Ecuador with the "terrorist" FARC and narco-trafficking. This is all part of the propaganda war against the Bolivarian revolution, in the same way that "weapons of mass destruction" were part of the build up to the invasion of Iraq.

But the most damaging part of the campaign of imperialism and the oligarchy is that of economic sabotage. In early 2008, the Venezuelan government discovered thousands of tons of food hidden in warehouses and trucks, being diverted to Colombia or the black market. This confirmed what everybody already knew. Food shortages in Venezuela were part of a concerted campaign organized by the oligarchy. But raids and seizures alone will not solve the problem. Only a serious offensive, based on the revolutionary initiative of the PSUV members and revolutionary trade unions, to occupy, expropriate and run under workers' control and management the means of production can put an end to the capitalists' strike which is crippling the Venezuelan economy and undermining support for the revolution.

On March 15 Chávez announced the nationalization of a dairy processing plant and a large chain of slaughterhouses which would give the state control over 40 percent of the milk processing and 70 percent of the meat processing sectors. Then, on April 3rd, he announced the nationalisation of the whole of the cement industry, controlled by three multinationals, the Mexican Cemex, the French Lafarge and the Swiss Hoclim. These are steps in the right direction, but must be extended to the whole of the food distribution chain and to all the key sectors of the economy.

The SIDOR steel mill strike clearly illustrates the dangers facing the revolution. Here we have one of the most important industries in the country, in an area with the largest concentration of the industrial proletariat. There are nearly 15,000 workers at SIDOR, a third of them working in-house and two-thirds working for a myriad of outside contractors. The company was privatised in 1997 under the Caldera government, when the former guerrilla leader Teodoro Petkoff was in charge of privatisations. SIDOR is now owned by Argentinean-Italian multinational Techint which has made millions in profits on the back of tremendous exploitation of the workers, which has resulted in a marked increased in deaths and accidents at work.

When Chávez made a call to "nationalise all that was privatised" in January 2007, the workers responded with spontaneous walk-outs and by raising the Venezuelan flag over SIDOR's installations. Finally, after many negotiations and pressure from the Argentinean government of Kirchner, an agreement was reached between Techint and the Venezuelan government. The company was to sell to the national market at preferential prices and in exchange, there would be no nationalisation. But throughout the 13 months of the collective bargaining negotiations the company has had a provocative attitude. Finally, the workers' patience ran out and they started a series of stoppages in January, February and March.

What was the response of the Ministry of Labour? First of all they tried to impose binding arbitration. Then on March 14th the National Guard was sent to brutally repress the workers during an 80-hour strike. The workers and the masses in the region have responded with a clear class instinct, organizing solidarity meetings and pickets, threatening strikes in other plants, etc.

Adel El Zabayar, a Bolvarian member of the National Assembly who came out publicly for the nationalisation of SIDOR explained: "There are sectors within the state that play at wearing down the government, using government authorities to assume a bosses' attitude". This is precisely the problem: the state apparatus remains largely the same, and a capitalist state cannot be used to carry out a socialist revolution.

Furthermore, the attitude of the Minister of Labour, José Ramón Rivero, accusing the workers of being counter revolutionary, siding with the company and putting pressure on the workers to accept the company’s offer, was playing into the hands of the right wing which was attempting to exploit the conflict. Finally, on April 9th, Chávez intervened on the side of the workers and announced the nationalisation of SIDOR. This is an important victory for the workers of SIDOR and will certainly have an impact on the struggle of Venezuelan workers as a whole.

If these problems remain unsolved, the Bolivarian revolution will be defeated. But in the rank and file of the PSUV and among the SIDOR workers, there are the forces that can take the revolution to victory. They need to be organized around a genuine revolutionary socialist and internationalist programme which alone can guarantee success.