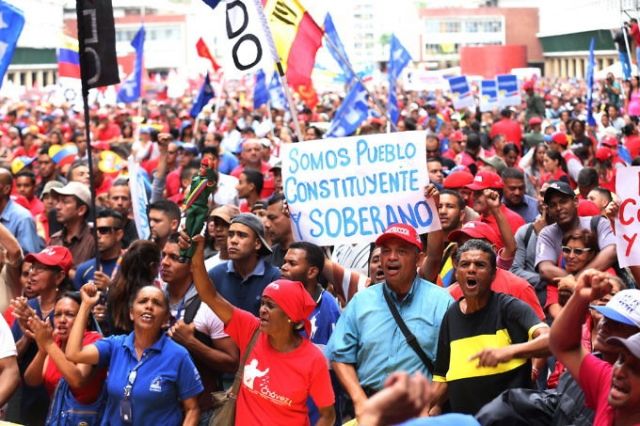 Even before the National Election Council had announced the results of Sunday’s Constituent Assembly elections in Venezuela, the opposition and western imperialism had already declared there had been massive fraud and that they would not recognise the legitimacy of the Assembly. Since then, they have piled up pressure on all fronts. What is to be done?

These were not normal elections, but rather an important battle in the offensive which the oligarchy and western imperialism have unleashed over the last four months against the Bolivarian Revolution. Not only did the opposition declare that they would boycott the elections, they also attempted to physically prevent the vote from going ahead. On Sunday, July 30, there were barricades impeding people’s passage, attacks on polling stations, destruction of polling material and machines, armed attacks against polling stations including the assassination of a National Guard protecting one in La Grita (Mérida), bomb attacks against national guards, etc. By the end of the day between 10 and 15 had been people killed, including a Constituent Assembly candidate in Bolivar.

Despite that, or in some cases as a reaction to it, millions of Venezuelans came out to vote. At the Poliedro stadium in Caracas tens of thousands waited many hours to vote. The stadium had been turned into a massive polling station to allow people who live in right-wing dominated areas in the East of Caracas to vote, as it was not safe for them to do so in their usual polling stations. The people of Palo Gordo in Táchira, were threatened by armed opposition supporters. Nevertheless they came out to vote, crossing rivers and mountains to reach their polling station . Opposition violence was particularly severe in areas of Táchira, Mérida, Barquisimeto, as well as in the East of Caracas.

It is also worth noting that in this election the opposition boycott meant that the only competition was between official lists sponsored by the bureaucracy and a whole series of coalitions and lists by different groupings of the chavista left. This might have contributed to increase the number of voters. 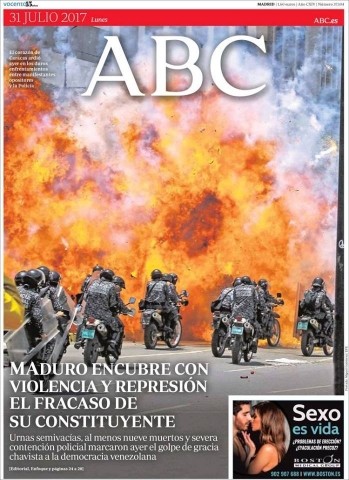 The international media coverage of the election was scandalous. They had already decided that a president which calls an election is, of course, a dictator. Not only this, most of them had front page headlines talking about government repression which they illustrated with a picture of a motorcade of national guards engulfed in huge flames as a result of the explosion of an opposition road-side bomb!

Of course, the Constituent Assembly results did not mean the end of the reactionary offensive. Almost simultaneously, right wing governments in Latin America, Washington and Madrid, announced that they did not recognise the elections. The Venezuelan oligarchy called for a new round of mobilisations. For the first time, US president Trump called Maduro a dictator and included the Venezuelan president in the list of Venezuelan officials sanctioned by Washington.

On Tuesday, August 1, the opposition controlled National Assembly, held a special session to discuss the next moves and declare the Constituent Assembly as illegitimate. In a very provocative move, the ambassadors of Spain, France, the UK and Mexico, attended the session and met with the NA leadership. This is a scandalous act of foreign imperialist intervention, on the part of countries whose human rights and democracy records leave a lot to be desired.

The truth is however that the opposition is divided as to what tactics to follow. Clearly a section, represented by Julio Borges, Ramos Allup and other old school bourgeois leaders can see that their campaign is not going as planned. They are also wary of the chaos a counter-revolutionary overthrow of Maduro by the actions of reactionary forces in the streets would cause and the possible resistance of a section of workers and peasants. They are also calculating that if the government survives then there will be regional governor elections in December in which they want to take part. This group is also joined by people like Lara governor Falcon, whose main interest is to keep his position.

Their preferred outcome would be a negotiated settlement with the government. This would allow a peaceful transfer of power, which would allow them to take control with the least amount of disruption possible. In fact, the US is sending mixed signals. Despite his threat of “swift and harsh” economic sanctions on Venezuela if the CA elections went ahead, the truth is that blacklisting Maduro is largely a symbolic move with very little real impact, because he has no assets in the US. Washington is worried of the impact economic sanctions would have in pushing Venezuela more into the arms of China and Russia, but above all their impact on the US economy. We need to remember that Venezuela is the third largest supplier of oil to the US and so any sanctions on the state-owned oil company PDVSA would have an immediate impact on oil refiners in the US, which have already been lobbying the government. More significantly, after Trump’s statement on Monday, Deputy Assistant Secretary for South America, Michael Fitzpatrick, said the U.S. wants “dialogue” with Maduro’s government, and that while it considered it as dictatorial, “we respect the official government of Venezuela and of President Maduro at this time.”

US Secretary of State Rex Tillerson seemed to be leaving all options open: “Our approach to Venezuela has been to try to work through coalition partners, through the OAS as well as others who share our view of Venezuela’s future ... Clearly what we want to see is for Venezuela to return to its constitution, return to its scheduled elections, and allow the people of Venezuela to have the voice in their government they deserve," he said in a press conference. He added:

“We are evaluating all of our policy options as to what can we do to create a change of conditions where either Maduro decides he doesn’t have a future and wants to leave of his own accord or we can return the government processes back to their constitution.”

The hard-liners in the opposition, drunk with their own success, want immediate regime change in Venezuela. Maria Corina Machado, speaking in the the National Assembly, argued for a course of action which would create alternative state institutions at all levels. She said that the National Assembly should not only appoint new Supreme Court Judges (which it did last week), but also National Electoral Council rectors, ambassadors and a new government. She hopes that these would then be recognised by imperialist governments. When these proposals were put to the National Assembly on Monday by Freddy Guevara, the AD leader Ramos Allup shouted him down immediately. Allup told him in no uncertain terms that these proposals were irresponsible and correctly pointed out, that the new NA appointed Supreme Court judges have either been arrested or sought refuge in the Chilean embassy, without the NA having been able to do anything to defend them. At the end of the day, a counter-revolution comes down to control over the armed bodies of men in the state apparatus, and the opposition still doesn’t have it. In fact, Ramos Allup has just announced that his AD party will participate in the regional elections.

Despite all their talk of a “zero hour” and a “march on Miraflores” last week, the opposition was not able to mobilise large numbers, precisely because of the indecision and mixed signals sent by their leaders. The reason is that while they were willing to make a lot of noise and issue grand sounding threats, they were at the same time participating in secret talks with the government - talks brokered by former Spanish president, Zapatero. The terms in these talks were a clear timetable for regional elections this year and presidential elections next year as well as the restoration of all powers to the National Assembly (something which would be achieved if they repeated the elections for the 3 annulled MPs for Amazonas).

Meanwhile, Maduro’s government has no other strategy than to insist in calling the opposition to negotiations and to offer further concessions to the capitalists.

The Constituent Assembly would only make sense if it was to be used in order to take decisive action to solve the current crisis, which has its roots in the deep economic recession. Only with a clear revolutionary programme is it possible to go forward. Left wing Constituent Assembly members should propose the following measures:

This program would rekindle the enthusiasm amongst the masses because it would start to address the key problems of the economic and provision crisis. Such a program would have to be backed up by the revolutionary organisation of the people in the working class and poor neighbourhoods and their armed self defence, following the example of the Popular Defence Brigades. They should be combined with the full mobilisation of the reserve of the Bolivarian Armed Forces and the close fraternisation of armed workers and peasants with its ranks.

The counter-revolution can only be combatted by revolutionary means. The workers and peasants can only trust their own forces. Defend the gains of the Bolivarian revolution, expropriate the oligarchy.