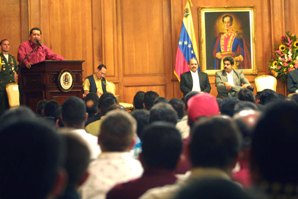 On the morning of January 19th, in the Ayacucho room of the Presidential Palace in Caracas, and with the presence of Venepal workers and trade union leaders, Chavez signed decree number 3438 which expropriates Venepal.

On the morning of January 19th, in the Ayacucho room of the Presidential Palace in Caracas, and with the presence of Venepal workers and trade union leaders, Chavez signed decree number 3438 which expropriates Venepal. From now on it will be co-managed by the workers and the state.

This is a very important victory for the workers of Venepal but more than that it is a massive step forward for the Bolivarian revolution.

Venepal is one of the main producers of paper and cardboard in Venezuela and its plant is located in Morón, in the industrial state of Carabobo. At one point it employed a total of 1,600 workers, controlled 40% of the national market and was one of the main Latin American producers in this sector. But the company’s management allowed the paper mill to slowly lose market shares and revenues. In April 2002, at the time of the short lived military coup against Chávez, some of its main shareholders were present at the swearing in ceremony for the new, illegitimate, “president” Pedro Carmona. During the bosses’ lockout against the Chávez government in December 2002-January 2003 the workers resisted attempts by the employers to paralyse the plant.

In July 2003, the owners declared bankruptcy and the workers responded by occupying the plant and starting to run production under workers’ control. Rowan Jimenez, a trade union activist and member of the action committee, explained how during the occupation, “the workers organised production, broke all productivity records and reduced unproductive waste to a level never seen before”, (El Topo Obrero interview, 16/09/04). After a 77-day long struggle an uneasy truce was reached. But that was not to last. On September 7th of last year, the company again ceased operations and the workers’ struggle started again.

From the outset of the struggle the workers adopted the demand for nationalisation under workers’ control that was being proposed by the comrades of the Revolutionary Marxist Current (The Workers’ Mole). There were a number of demonstrations in Moron and in Caracas, and solidarity actions were being organised by workers in other factories, particularly those organised by the Carabobo region of the newly established trade union federation, the UNT.

After months of struggle, finally, on January 13th, when a delegation of Venepal workers went to Caracas to demand a solution, the National Assembly declared Venepal and its installations to be of “public usefulness and social interest”. This was the prelude for Chavez signing decree no. 3438. This is the result of the struggle and the resilience of the workers in Venepal who consciously sought the support of the local community for their struggle.

In his speech at the signing ceremony, in front of a large number of Venepal workers and UNT trade union leaders, Chavez said “here we are creating a new model, and that is why in Washington they are angry... our model of development implies a change in the productive apparatus. The working class must be united, learn and participate”.

Before Chavez, the oldest worker in Venepal took the stage and described their four month long struggle and the sacrifices they had had to make. Edgar Peña, general secretary of the Venepal workers’ union explained how the workers had drafted a project that proved the company could be profitable and how this paved the way for expropriation. Peña also asked for National Guard protection of the installations, since there are still those bent on sabotaging them. He also explained how, when they resume production in a few weeks’ time, the first products will be destined for the government’s social programmes (Misiones), “for the benefit of the working class”.

In his intervention, Chavez stated that capitalism is a model based on slavery, “and this is why in Washington they are angry, because we want to liberate ourselves from capitalism, in the same way that they were angry many years ago with the ideas of Libertador Simon Bolivar”.

Referring to Condoleeza Rice’s recent criticisms of Venezuela, he said that there are good remedies in the market to cure ulcers, “for those who might need it”. He added that some might be annoyed at what is happening in Venezuela, but “they will continue to be annoyed by the revolutionary process, because no one is going to dislodge us from it”.

Chavez added that the “role of the workers in this model is fundamental and this is the difference between this model and the capitalist model”. He emphasised that “it is necessary to change the productive relations”.

“Capitalism wants to annihilate the workers... here we are carrying out a process of liberation of the workers, and this is why they are annoyed in Washington”.

He explained that the recovery of factories on the part of the state is aimed at changing the conditions of exploitation the workers have been submitted to by the capitalist model and the recovery of the country’s industrial capacity. He added that these new companies should not be viewed through the lens of state capitalism, but rather as co-management. “We must not fear the workers since they are the soul of the companies”.

Chavez also announced the “recovery” of a maize processing plant and all of the basic industries in Guyana (this means the massive SIDOR steelworks amongst others).

Though he said that “today’s expropriation of Venepal is an exceptional measure... we are not going to take away land, if it is yours it is yours”, he was also clear that “any factories closed or abandoned, we are going to take them over. All of them.”

“I invite the workers’ leaders to follow on this path” he said. This is a clear appeal to workers in other factories who were also involved in the struggle of the occupied factories in July-August 2003, like the CNV, Fenix, Industrial de Perfumes, CODIMA, among others. Workers in these factories have already started to remobilise.

This is without doubt a massive step forward in the right direction. But it must also be extended to all those other sectors of the economy that are under monopoly and imperialist control. This should include the banking system (which is largely in the hands of the two Spanish multinationals), the telecoms sector (in the hands of US multinationals), the food distribution sector (in the hands of a couple of Venezuelan companies owned by known coup organisers), and others. This needs to be done, as in the case of Venepal, under workers’ control. In this way the whole economy could be planned to the benefit of the majority of working people. This would be the only way of guaranteeing the final victory of the revolution. Workers’ control or management, if it remains isolated in one single company, cannot, in the longer term, fundamentally solve the problem.

Through its own experience, the Bolivarian revolution has come up against the wall of capitalism. Now it needs to break it down and move to a democratically planned socialist economy in order to win the war against poverty and misery.