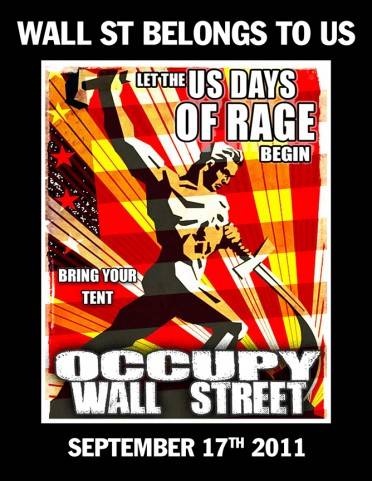 “Enough is enough! We are the 99%!” This is the sentiment being expressed by the brave youth now occupying Freedom Plaza in New York City, just a few feet away from Wall Street. This is the pent-up feeling of millions—no—billions of people around the world. Enough unemployment! Enough war! Enough poverty! Enough discrimination!

We live in the wealthiest and most productive era in the history of humanity. But the absurd, irrational, and inhumane limits of capitalism mean there are not enough jobs, homes, or food to go around in a world of plenty. This has always been the grim reality for hundreds of millions around the planet. But now it has come home to the world epicenter of capitalist greed, speculation and indifference to human suffering: Wall Street.

And it is spreading. The occupations have spread to cities around the country and around the world, inspired by each other's heroic resistance to the cuts, austerity, and misery being imposed on us all. It is the beginning of a new awakening, a new consciousness, and most importantly, a new desire to act, to actually do something. Thousands of youth, formerly derided as apathetic and apolitical, have now sparked the imagination of millions.

Not since the anti-globalization movement of 1999 and 2000 have we seen such a convergence of struggles. September 11, the Patriot Act, a decade of wars, and sincere illusions in the Democrats largely drove the anger and dissatisfaction underground. Now it is coming back with a vengeance, on an even higher level. No longer is “globalization” in the abstract the enemy. The enemy is clearer than ever: corporate domination of the economy and politics. More and more people are coming to understand that the root of all these ills is one and the same: capitalism.

By definition, capitalism is a system that defends the interests of the capitalist class. Since less than 1% of the population are actually capitalists, it is a system that operates against the interests of the other 99%. It follows that if we limit ourselves to finding solutions to the crisis within the boundaries of capitalism, we are limiting ourselves to solutions that can only truly benefit the top 1%. We need a different approach. We need to look beyond the narrow horizons of our current system. The working class majority has every right and an urgent necessity to democratically run the society in its own interests. 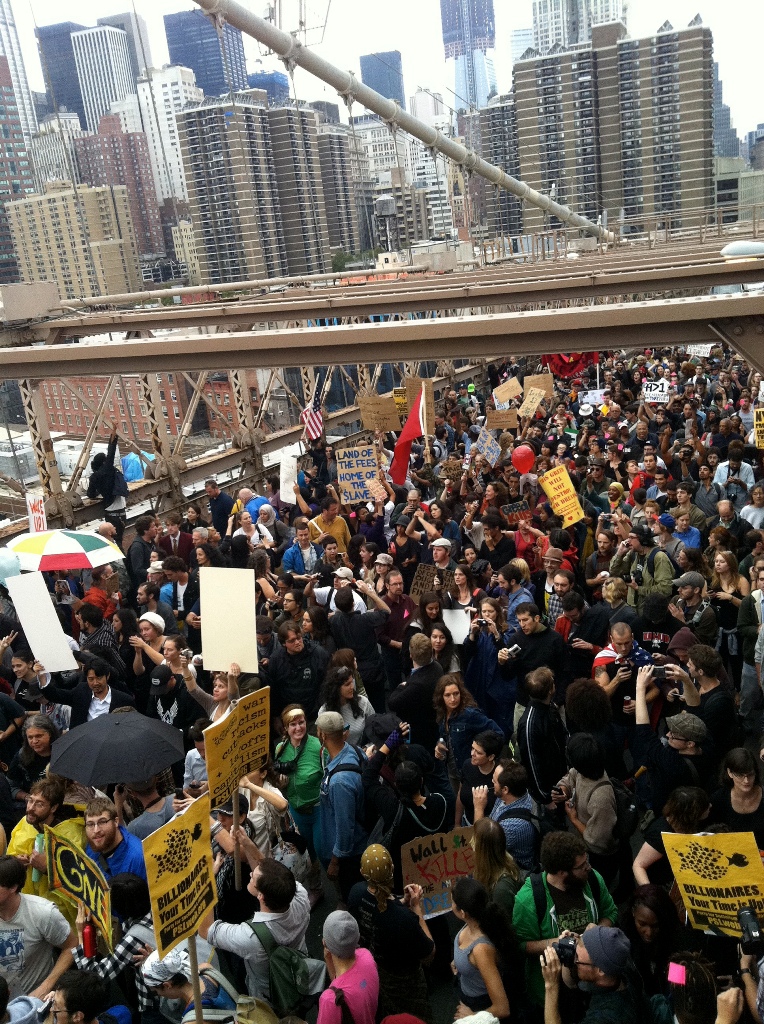 Demonstration on the Brooklyn Bridge The #occupy movement has yet to coalesce around a clear program and leadership. Given the lack of a bold lead by the unions and the absence of a mass workers' party in this country, this should come as no surprise. But events and experience will help the most advanced layers draw revolutionary conclusions. So far, the movement has not drawn in the broader layers of the working class, of organized labor. But this is always the way mass revolutionary movements begin. The youth are the proverbial “barometer” of society, the first to move into action. But the problems facing the working class cannot be resolved through mere reforms or tinkering of the system. They hoped against hope the crisis would pass—but it has only gotten worse. Sooner or later, they too will have to enter the path of mass struggle, and when they do, the whole dynamic will change.

Already, many unions have declared their solidarity with the occupiers on Wall Street. Solidarity statements are important. But what is really needed is decisive action. New York City's 1.2 million organized workers could shut down Wall Street in a heartbeat by freezing transit, cutting off electricity, phone lines, and water, suspending waste disposal and janitorial services, shutting down hotels and restaurants, and mobilizing tens of thousands of workers to physically occupy lower Manhattan. The #occupy movement must reach out to the unions, must spread it to every workplace, school, and neighborhood. For their part, the unions must take the initiative and reach out to the #occupy movement, bolstering its forces with the colossal numbers, power, and resources of organized labor.

Three years ago, many of these young people rallied behind Obama's promise of change. Now they are taking things into their own hands. With the presidential elections just 12 months away, Americans are frustrated and angry. 90% believe the economy is rotten, a new record. The government has its lowest approval ratings ever. Only 15% of Americans trust the federal government to do what is right always or most of the time. Just one year ago that figure stood at 25%. And yet they overwhelmingly want the government to provide jobs, health care, education, Social Security, and rebuild the country's crumbling infrastructure. 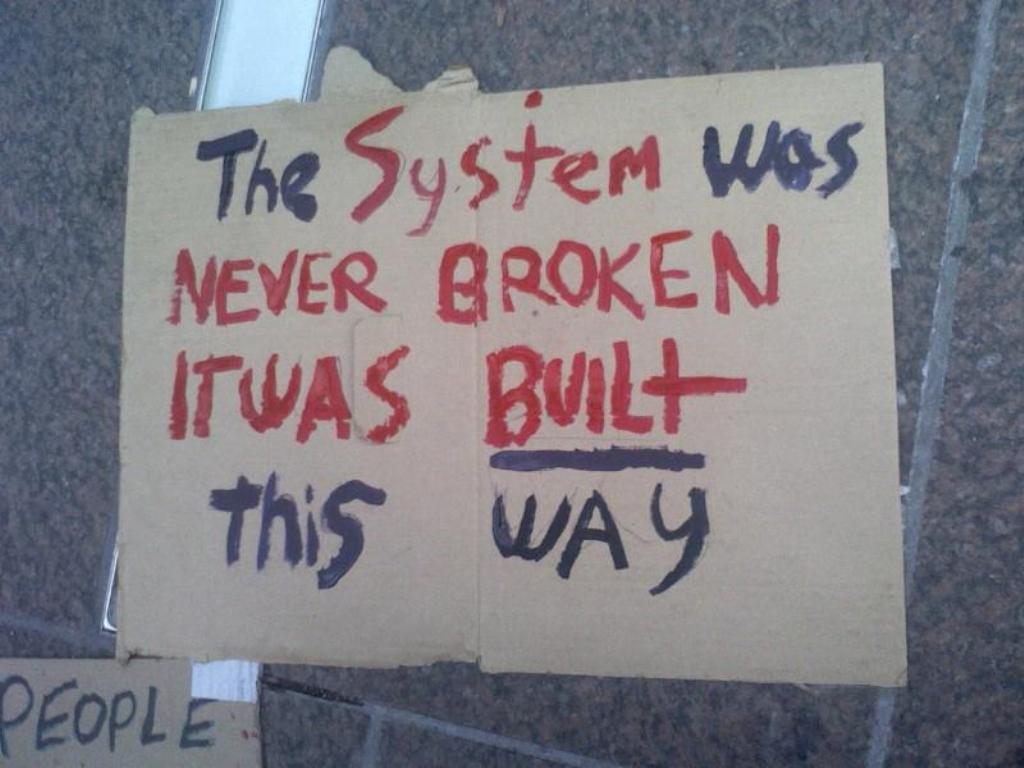 The system wasn't broken - It was built this way This might seem an inexplicable contradiction. But deep down, it shows that Americans are seeking a collective solution to their problems. However, they do not trust the current government representatives and structures to do it. Rightly so! Both the Democrats and Republicans are at the beck and call of the big corporations. It is these unelected, unaccountable entities that really call the shots in government and the economy. It is they who determine who works, who has a home to live in, who has access to health care and education—and who doesn't.

The electorate wants to “throw the bums out!” But who should replace them? The government can either defend the interests of the workers, or it can defend the capitalists. Either it will use its power and resources to improve the lives of the majority, or it will harness these to further enrich the wealthy. If it does not make inroads on the wealth and property of the rich, it will push working and living conditions for the masses down even further.

No matter what “intentions” a politician may have, it is what they actually do that counts. The proof of the pudding is in the eating. Republican and Democratic administrations only offer variations of the same pro-corporate policies. Even if we grant that there are “good Democrats” and even “good Republicans,” the indisputable fact is this: they will never get anywhere within the overall apparatus of their respective parties, which are totally dominated by big business. This is why we need a workers' government. And to achieve that, we need a labor party armed with a socialist program.

So far, the labor movement has not offered a lead, either on the streets or in politics. But this can and will change. The pressure is building. The mood in favor of a labor party is simmering in the ranks of the unions. Obama's anemic jobs bill is being pushed by the union tops, but the rank and file know it is not enough. This bill will do little to reverse the utter decimation of millions of good union jobs. It cannot succeed in bridging the growing polarization of wealth and society. Over the last ten years, the income of the top 1% has risen by 18%, while that of blue-collar male workers has fallen by 12%. The so-called "American Dream" has been shattered. 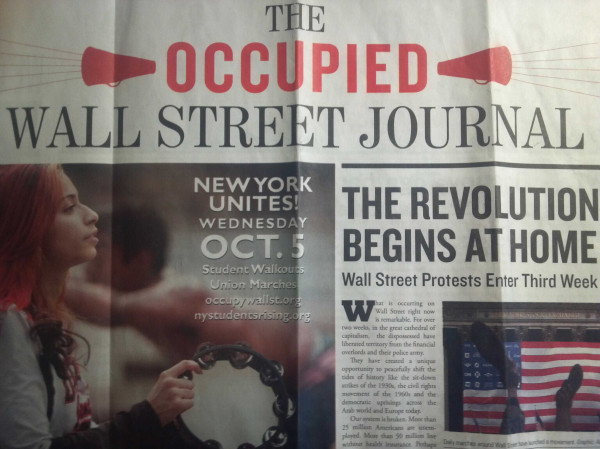 #OccupyWallstreet Journal After the 2008 crisis, we were told the “green shoots” of an economic recovery were right around the corner. The recovery came—but only for the rich. In Greece, Spain, Tunisia, and Egypt, the social explosion came sooner. But similar conditions lead to similar results. The conditions workers and youth face around the world are fundamentally the same. As night follows day, the crisis of capitalism has now led to the “green shoots” of the class struggle right here in the belly of the beast.

The Workers International League welcomes the #occupy movement with open arms. We have been participating in it in cities around the country from the start. But it is only the beginning of the beginning. The masses of workers have not yet entered the stage of history and seized their destinies in their own hands. But at a certain stage they will, of this we can be sure. We in the WIL are confident that this small seedling will in time grow into a mighty oak of revolution, which will sweep capitalism and all its evils aside once and for all. Our task is to connect the ideas of revolutionary socialism with this movement, which contains within it many of the future leaders of the American socialist revolution.

Contact the Workers International League in the USA and get involved in the struggle for a better world!

[This is the Editorial of the US Socialist Appeal Issue 63, www.socialistappeal.org]