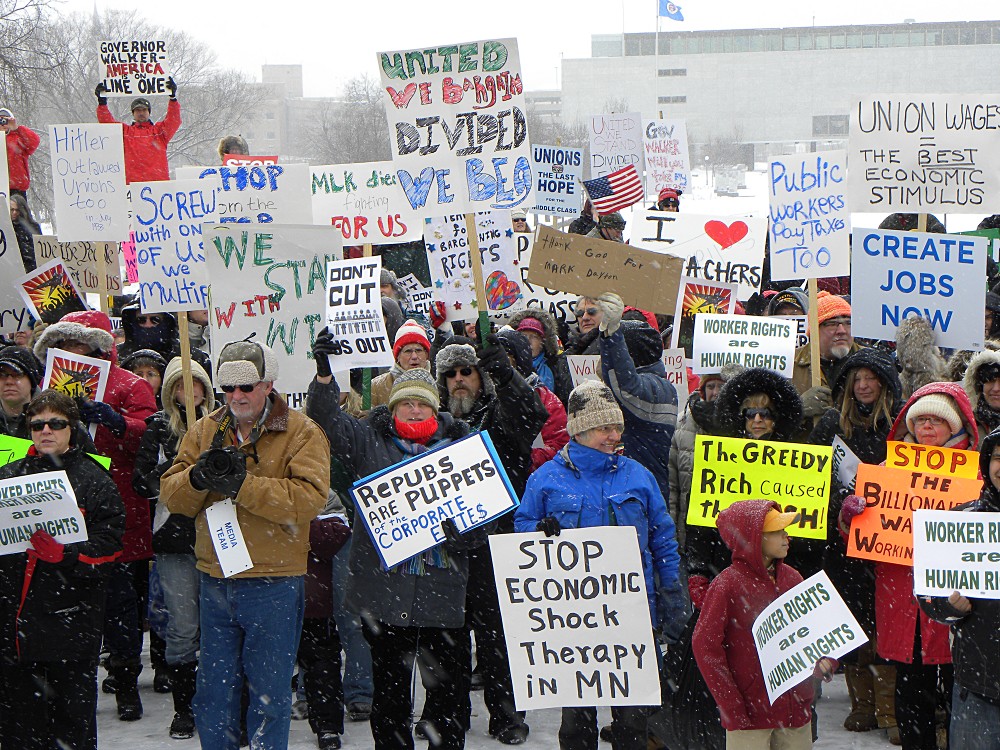 As ratings agency Moody's considers the possibility of cutting the US AAA debt rating, concerned that the US could default on its debt obligations, we publish a recent editorial statement of the US Socialist Appeal on the forthcoming wave of massive cuts in public spending in the United States. As the article points out, “the capitalists must impose a new normality on the U.S. working class. The crisis of their system means that small cuts or adjustments are no longer enough. The hatchet is out now...”

“Death by a thousand cuts” was a horrific form of torture originated in Imperial China that slowly bled the victim to death. No individual cut by itself was enough to cause the victim’s demise, but the accumulated effect of the blood loss, pain, shock, and trauma of hundreds of small cuts eventually did the job.

Some have called this kind of phenomenon “creeping normalcy,” whereby small, almost imperceptible changes gradually build up over time, leading at a certain stage to a fundamental and qualitative change of state. Or as the saying goes, “Give him an inch and he’ll take a mile.”

In a similar way, the American Dream has been whittled away over the last few decades. A small health care premium increase here. A smaller wage increase there. A 401k instead of a traditional pension. Fewer days of paid sick leave. Small cuts in essential social services, starting as far back as Carter, continuing under Reagan and Bush Sr., and accelerating under Clinton, Bush Jr. and now Obama. The accumulated effect of these “small” cuts have left the social safety net in tatters, not to mention the quality of life Americans had come to expect as “normal.”

But these cuts were just the proverbial “tip of the iceberg.” Now the real pain begins. As we have explained before, the capitalists must impose a new normality on the U.S. working class. The crisis of their system means that small cuts or adjustments are no longer enough. The hatchet is out now, and even programs that seemed “untouchable,” such as Medicaid, Medicare, and even Social Security are fair game. Because under capitalism, nothing is “untouchable.” As long as there are profits to be made and the working class does not wage a mass struggle of resistance, the bosses will always demand more. More cuts. More concessions. All in the pursuit of more profit.

The scale of the coming cuts is mind-boggling. Ordinary workers cannot possibly have any real conception of the tsunami that approaches. Even more in shock are the labor leaders, who hoped against hope that they could somehow reach a “gentleman’s agreement” with the bosses and their political parties. But money talks, and big business has a vice grip on all levels of government, no matter which of the two main parties is in power.

Many thought Scott Walker in Wisconsin was an anomaly, a particularly vicious representative of the “Tea Party.” But it’s the same story everywhere: cuts, layoffs, furloughs, rising health care costs, tuition and fees. In California, Democratic Governor Jerry Brown is imposing a truly staggering series of cuts. In New Jersey, the Democratic legislature is cheering on the cuts imposed by the Republican governor. In Minnesota, a standoff over the budget has led to a state shutdown, with billions in cuts already conceded to the Republicans by the “worker friendly” Democratic governor.

Here is what we wrote about the coming budget debate in the January 2011 issue of Socialist Appeal:

“The bipartisan Bowles-Simpson Commission, which outlined sweeping cuts in social spending and advised an increase in the retirement age, will be the blueprint for the cuts to come. Obama will inevitably find a ‘compromise,’ which will mean serious cuts in our already precarious standard of living. From the impending battle over increasing the federal spending debt ceiling to repeal of the anemic health care bill, the Republicans will continue to bully the Democrats, who will continue to cave and compromise, selling out the futures of millions of Americans. The reason is simple: the ruling class needs to drive down wages and cut social services, and they don’t care which capitalist party gets the job done for them.”

The perspective we outlined six months ago have been entirely confirmed by events. However, the scale of the impending cuts is even worse than those envisioned by Bowles-Simpson (which was cynically referred to as the “cat food” commission, as the poor and elderly will have to resort to eating pet food if they also want to pay the rent and buy medicine!).

As CNN.com put it, “Obama plays nice, GOP turns tough.” In other words, the “bad cop” has the upper hand over the “good cop,” and the “inch” has now turned into a “mile.”

“The debt ceiling negotiations have amounted to a succession of retreats and concessions by President Obama. The president opened negotiations by offering $3 of spending cuts for every $1 of tax increases. His current offer tilts even further to the GOP: $6 of spending cuts to $1 of tax increases ... Spending cuts [would] come from programs Republicans dislike, like Medicaid, rather than programs they like, like the farm budget. The tax increases meanwhile are designed to be as acceptable as possible to the GOP: no increases in tax rates, but instead trimming some of the less defensible deductions in the tax code.”

The rich and corporations are richer than ever, taxed less than the average worker, and more free to exploit loopholes in the system than at any time in history. And still they want more.

Parroting the Tea Party, Obama says the government should “live within means.” We say it needs more means! Even a modest progressive overhaul of the tax code would produce a massive budget surplus—but the rich would fight against this tooth and nail. Only a mass political and social movement, headed by the unions and fighting in the workplace, on the campuses, and in the streets, can win even this most basic demand.

The Democrats are absolutely incapable of fighting the Republican “cuts and concessions” juggernaut. They are just as tied to big business as their partners across the aisle. We have beaten the “build a labor party!” drum for years, but the need has never been more urgent. The 1.3 million signatures collected in Ohio to put a referendum on the anti–public sector worker legislation on November’s ballot is just one example of how the labor movement could mobilize its forces to build a such a party.

We are told there is no money for a mass program of useful public works, while the military spends $400 on a single gallon of gasoline in Afghanistan and $1 million per year to keep just one soldier stationed there. We are told there is no money for health care and education, and yet the Pentagon spends an incredible $20.2 billion a year on air conditioning alone in Iraq and Afghanistan. That’s more than NASA’s entire budget and more than it cost to clean up the Gulf Coast oil spill.

In Minnesota, the Republicans called the governor’s bluff and forced a state shutdown. It cannot be ruled out that they will also call Obama’s, leading to a default of the U.S. government, which would make a Greek default look like a garden party in comparison. It may seem impossible that Wall Street would let things go this far, but the ruling class must fundamentally retool the federal government and what citizens can expect from it. They want to roll back the clock 100 years or more, to squeeze ever more out of the workers while providing as little as possible in return, and they don’t mind imposing a little—or a lot—of pain to achieve their goals.

But the capitalists disregard at their own peril the Marxist tenet that conditions determine consciousness. Just as conditions 100 years ago eventually led to an almighty fight back by the working class, so too will this be the case in the not-too-distant future. Tremendous explosions of the class struggle are on the horizon: the workers have no other choice!

The material basis of the American Dream is being completely undermined. And as the illusions in this fairy tale continue to erode, so too will illusions in the capitalist system itself. This will provide enormously fertile ground for the ideas of revolutionary Marxism and socialism, as workers look not only for an explanation for the crisis, but a way out of it.

The time to fight back is now! No to bipartisan cuts! No to concessions! Build a labor party! Fight for socialism!