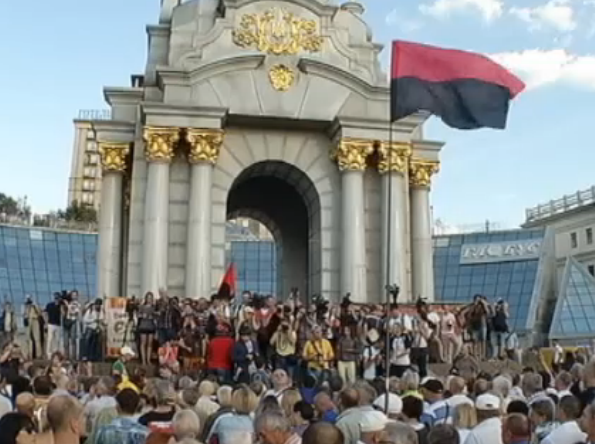 In the Western Ukrainian region of Zakarpattia, Far-right Right Sector have clashed violently with police, resulting in two militants dead and several bystanders injured. What does this mean for the stability of post-Euromaidan alliance?

What can be described as a “vigilante” operation gone awry, has ended in a bloody clash with police, leaving two fascists dead, several bystanders, police and militants injured. Right Sector – a far right Ukrainian paramilitary organisation claiming the legacy of the Nazi-collaborating Organisation of Ukrainian Nationalists (OUN) – targeted a Ukrainian MP Mykhailo Lanio (formerly Party of Regions) on July 13th in his home region in Zakarpattia. Despite being heavily armed, they were met at the location by the MP’s guards along with local police, foiling their attempt to presumably kidnap the MP for what Right Sector claimed was the MP’s smuggling operation in the border region. This had put both the leaders in Kiev and Right Sector in uncomfortable positions.

For the oligarchs in Kiev, this was an embarrassing demonstration of the lawlessness that has followed the events of Euromaidan. Since those events, the primary objective of those in power had been to profit as much from the civil war while gaining loans from Western governments and the IMF. In their eyes, the legitimacy of the Kiev government lies in their ability to stabilize the situation in Ukraine for the business interests of foreign capital.

Ukraine’s total debt is estimated at a staggering 158% of its GDP and growing. Despite harsh IMF backed austerity measures being introduced by the government – including the cutting of pensions, social services and sacking of hundreds of thousands of public employees – the debt is continuing to spiral out of control. This is largely due to the enormous amount of spending going towards the war with the Donbas rebels along with the general militarization of the country. This of course is very convenient for the pro-Maidan oligarchs, as they are making billions of dollars off all of the business around supplying the army. Lenin, when he was told that “war is terrible” replied “yes, terribly profitable”.

The profit making of the oligarchs does not stop at the war effort as many have used the increased lawlessness to expand their business empires. This has nevertheless caused friction between some pro-Maidan oligarchs, most notably president Petro Poroshenko and the former governor of the Dnipropetrovsk Oblast Ihor Kolomoiskiy. This was brought to the open when last March, Kolomoiskiy and his thugs physically seized the headquarters of the state oil company UkrNafta last March, where Kolomoiskiy already owned a 42% stake. This type of takeover – although not entirely rare in Ukrainian business practices – was too high-profile and embarrassing for a corrupt Kiev president trying to present himself as a champion of “anti-corruption”. Shortly after, two minor government officials were arrested as a show of action, while Kolomoiskiy himself was only forced to resign from his position as Dnipropetrovsk governor after a face to face meeting with the president.

These types of manoeuvres are nothing new for the Ukrainian oligarchy. What has been a new occurrence is the reliance on militias – many with openly fascist and neo-Nazi ideologies – in their war against the rebels in the East and in quelling dissent in the rest of the country. Heavily implicated in the Euromaidan and the overthrow of Yanukovich in February 2014, they formed the basis for the National Guard battalions sent to combat the rebellion in Donbas. The battalions proved more willing than the regular Ukrainian army in combatting the rebels and so were useful.

While the Western media has often portrayed these battalions as “fighters for democracy”, often uncritically parroting the story’s from Kiev information ministries about Russian divisions crossing the border into Donbas. More and more, this façade is beginning to crumble.

The Western media has reluctantly been obliged to cover the far-right presence among the Ukrainian army. When the United States army began openly training the battalions earlier this year – notably the neo-Nazi Azov battalion – a bill was proposed by US congressman John Conyers to prevent the training of far-right elements, as if they could simply be sieved out of the National Guard ranks. Adding to this was the shocking revelations about the torture, rape and murder of civilians in the Lughansk region by members of the “Tornado” battalion, many of whom were violent criminals recruited from the Ukrainian prison system to fill the ranks of the battalion.

The dog lashes out against the master

In many ways, Right Sector became the symbol of the brute force at Euromaidan. Their ranks and influence swelled from a marginal group with few hundred members to a well-armed paramilitary organisation with thousands of members, and Members of Parliament. Their leader Dmitry Yarosh frequently appears on television, including the popular talk show Shuster Live.

Having gained their reputation as a combative force, they have focused their actions in military combat in Donbas, the kidnaping and torture of people suspected of “separatism” along with operations against drug rings. Local police are often less armed than the militias and are usually powerless and afraid to stop them, especially given the way Euromaidan transpired.

In Zakarpattia, they bit off more than they could chew in going after an oligarch MP well installed in the region. While the SBU tried to imply that the incident was the work of “Russian agents”, Poroshenko stated his intention to disarm Right Sector. Nevertheless, Right Sector was able to organize an armed rally numbering 3000-5000 outside the presidential office in Kiev, calling on the resignation of the president. In order to organise it they have also partially retreated from the front line.

Despite their anti-oligarch rhetoric, National Guard battalions and far-right groups in Ukraine are tied to oligarchs in terms of receiving funding and equipment. While Kiev is happy to have these groups fighting rebels, repressing opposition to the government and breaking up trade union actions, it is not out of the question that they could pit these groups against each other should they feel threatened as occurred last summer in Kiev.However, the show of strength of the Right Sector is a warning to what any Ukrainian government might face if it decides to finally settle the matter of the rebel republics.

The oligarchs and Western Imperialism

US imperialism historically has shown no hesitation in supporting brutal regimes, but prefer if these things stay hidden. As Ukraine’s economy veers closer and closer to default, it is more and more dependent on foreign aid, and thus, is in the process of transforming into a client state for foreign interests. This puts Ukrainian oligarchs in a contradiction however, as they have historically maintained a certain independence from both Western and Russian capital. Last June, Poroshenko dismissing Valentyn Nalyvaichenko – who is considered close to US interests – as the chief of the interior security agency, SBU.

Just how far Washington will tolerate the current Kiev regime remains to be seen. As of now, the US imperialism aims in the Ukrainian conflict are:

Neither the Ukrainian oligarchs nor US imperialism has an interest in ending the conflict because it is simply too profitable. The conflict is equally advantageous for various speculators holding Ukraine’s debt, who can make profits speculating on the debt, despite Ukraine not likely to ever be able to repay.

While the far-right poses a threat to any Ukrainian opposing the current order they are too tied to the oligarchs and the government themselves to pose a real threat to their power. Support from the US will go to the section of the oligarchy most willing to continue the transformation of the country into a client state for the interest of their multinationals. Another overthrow of the president is certainly not out of the question. These kinds of changes will only lead to the further destabilisation of the country, and drive Ukrainians further into poverty and war.

Many people who passively or actively supported the overthrow of Yanukovich did so with the idea that “things could not get any worse”. The events of the past year have shown them that there is no end in sight in the race to the bottom. Even the newly appointed governor of the Odessa region, Mikhail Saakashvilli, the former Georgian president who is sought in his country on corruption charges, has stated that it will take 20 years of stability to bring the economy back to the level it was under Yanukovich. We would add that there is no bottom for capitalism in crisis, which applies not just for Ukraine, but essentially everywhere in the world at the moment.