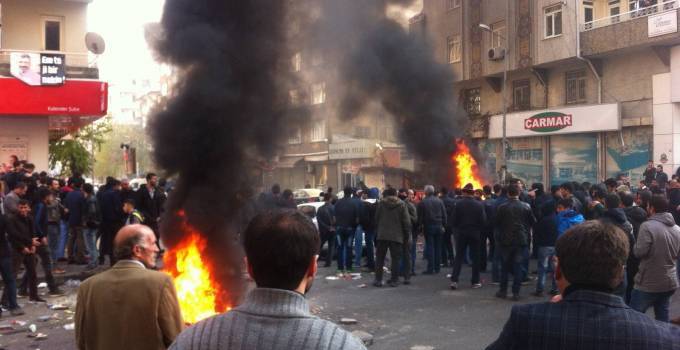 We here share an appeal for solidarity against the war on the Kurds of Turkey, waged by the Erdogan regime in Turkey.

In the course of armed conﬂict that restarted in the Kurdish region of Turkey after general elections in June 2015, 186 civilians most of which are women or children have died so far, hundreds of them were injured and thousands of people were arrested. Concerning co-mayors who are members of our union, 17 of them are now arrested while 25 of them were suspended from their duty and 6 of them were issued arrest warrants since July 2015. In order to end human rights violations in our region, there is an urgent need for revitalizing peace talks for resolution of Kurdish question in Turkey.

Since the August of this year, as a reaction to repressive policies of Turkish state that resurged, peoples assemblies in many Kurdish cities and towns voiced their demands for self-governance. These demands for self-governance, -aiming at achieving decentralized structural transformation against centralism- were responded by Turkish government with disproportionate state-led violence. In Kurdish cities where demands were self-governance raised, especially in Cizre, Sur, Silvan, Nusaybin, Dargecit, Silopi and Yüksekova, the Turkish government declared  curfews which have continued for weeks during which civilians have been killed by Turkish security forces  while mass migration of residents  of cities under curfew continue. Even bodies of civilians killed by the Turkish state are not allowed to be buried for days due to the curfew and they were kept in houses. In addition to this, tens of civilians were targeted by Turkish snipers while those injured civilians were prevented from access to health care by security forces. Unfortunately, these developments still recur day by day in those above mentioned cities. As a result of ongoing armed conﬂicts, more than 200.000 people had to migrate from conﬂict zones and this number still increases. Moreover, historical buildings in Sur district of Diyarbakir city which were recognized by the UNESCO as the world heritage are also under danger due to armed clashes. So far, Kursunlu Mosque and Pasha Hamam which were built in the 16thcenturywere targeted by the Turkish  security forces  and physically  destructed to an extent that restoration endeavors might never be enough in future.

Following re-escalation of armed conﬂict, 18 towns having population about 100K have witnessed curfews and 5 of these towns are still curfews areas as of 215t of December, 2015. More importantly, ongoing armed conﬂicts in urban areas has reached to anew and more detrimental stage by the 14th of December, 2015.Tanks and heavy weaponry which are only used in conventional warfare started to be used by Turkish Armed Forces in areas where hundreds thousands of civilians live. The numbers of soldiers and police have increased drastically in recent weeks in our region. According to statistics given by Turkish state authorities, 14 generals, 26 colonels and 10 thousand soldiers were transferred only for the Sirnak city and 5 thousand more soldiers will be transferred in following days. In addition to this, National Education Directorates in Cizre and Silopi made an ofﬁcial call for teachers to leave those cities. Ministry of Health sent an ofﬁcial memorandum to hospitals in our region to have more personnel pouch and stock medical care equipment as much as possible. All peaceful demonstrations aiming at protesting curfews and human rights violation also faced police brutality and repression.

All these developments makes us think that gross human rights violations taking place in recent months will continue and get even more serious. Therefore, this is an urgent call to all pro-democracy forces over the world to oppose to anti-democratic measures taken by the Turkish state. To be able to prevent more deaths and right violations before it would be so late, I make these concrete demands:

It is urgent that;

APP.1: Basic Information on curfew areas as of 21st of December:

Curfews declared for 5 times. The last one started on 14th of December 2015, and continues since then. In total, Cizre remained under curfew for 21 days. Since July 2015, 39 people died in Cizre while 7 people were killed during the last curfew.

Curfews declared 3 times. The last one started on 14th of December 2015, and continues since then. In total, Silopi remained under curfew for 10 days. Since July, 2015 25 people died in Silopi while 10 people were killed during the last curfew.

Curfews declared for 7 times. The last one started on 14th of December 2015, and continues since then. In total, Nusaybin remained under curfew for 38 days. Since July 2015, 22 people died in Silopi while 2 people were killed during the last curfew.

Curfews declared for 2 times. The last one started on 11th of December 2015, and continues since then. In total, Dargeçit remained under curfew for 14 days. Since July 2015, 4 people died in Dargeçit while 2 people were killed during the last curfew.

Curfews declared for 6 times. The last one started on 2th of December 2015, and continues since then. In total, sur remained under curfew for 30 days. Since July 2015, 10 people died in Sue while 5 people were killed during the last curfew.

APP.2: General Data on the Recent Armed Conflicts and Massacres:

As of 10th of December, the number of guerillas, soldiers and policeman died is approximately 400.

In total, 186 civilians died during curfews, protests and executions since July 2015