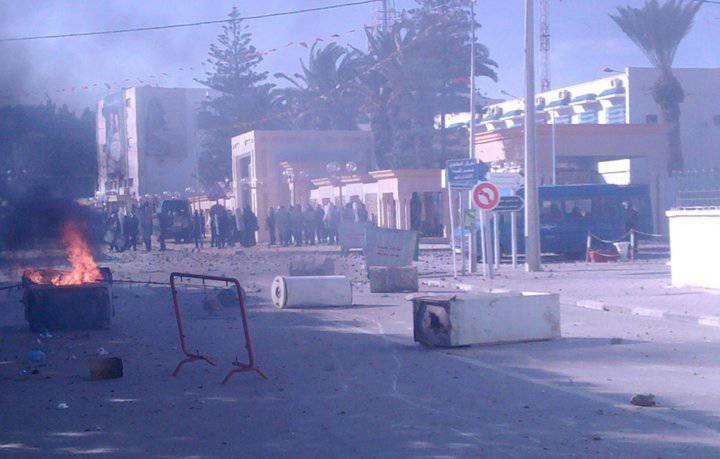 Several suicide attempts by young Tunisians, as protest against poverty and unemployment, sparked a number of riots and protests all over the country in the last few weeks. We publish here a short English introduction to an article in Arabic. A translation of the more detailed analysis will be published tomorrow.

Mohamed Bouazizi, a young Tunisian from the central rural city of Sidi Bouzid, attempted to end his life by setting himself on fire. He has been unemployed since he graduated from university five years ago. A few days later another unemployed youth tried to electrocute himself in protest against the poor prospects for Tunisian youth.

In the city of Sidi Bouzid 25 percent of male graduates have no job. This figure increases to 44 percent for female graduates. Meanwhile five other youths have tried to kill themselves but were saved in time. Those acts of despair have provoked a chain reaction of riots and protests all over the country.

The clashes started in the inner cities of the country but have now flared up in the capital Tunis and other important cities. This spontaneous outburst of anger against unemployment is turning more political, with demonstrators demanding the end of the power wielded by the greedy and corrupt ‘Trabelsi’ family over government, state institutions and the economy.

The ‘Trabelsi’ family, starting with the dictator president Zine el Abidine Ben Ali and his wife Leila, dubbed as the ‘regent of Carthage’ has been holding Tunisia in an iron grip for the last 23 years. This is the first time since the 1984 bread riots that Tunisia has witnessed such a widespread, tireless and stubborn protest movement. For two weeks the whole nation was almost paralysed by this movement.

One Middle Eastern newspaper has understood the real meaning of these events: “No one thought it [Tunisia] susceptible to the kind of social and political unrest it has witnessed recently”. (Gulf News, 1/1/2011.) Tunisia was until recently thought to be a model country in this troubled region. A haven of stability, this darling of the West combined economic growth (as a popular tourist destination and a very cheap subcontractor for continental industries) with so-called ‘enlightened’ dictatorship, a secular bulwark against Islamic fundamentalism.

Tunisia is probably the best friend of the European imperialist countries and its economy depends for almost 80% from revenues and investment from EU countries and companies. The new troubles in Tunisia are sending shivers down the spines of neighbouring dictatorships and of imperialism.

Tunisia was recently congratulated by the IMF and the World Bank on the way it resisted to the effects of the world recession. If Tunisia can explode, imagine what can happen in other countries in the North of Africa or the Middle East. Al Jazeera, the popular Quatari television recently published an article about the ‘rebirth of Arab activism’. But it was not referring to Islamic fundamentalism or a spate of terrorist attacks. It explains how “Mohamed Bou'aziz, the young Tunisian who set fire to himself on December 17, is emerging as a symbol of the wider plight of the millions of young Arabs who are struggling to improve their living conditions”: 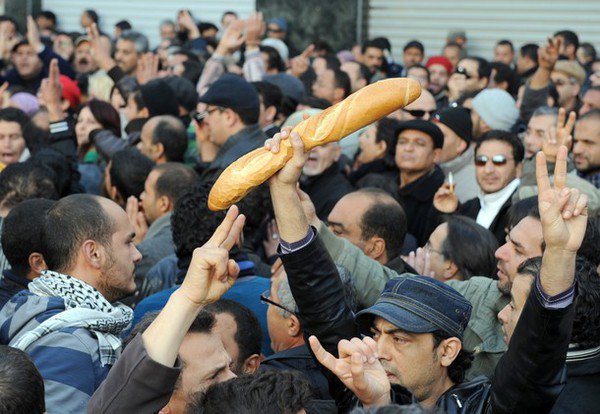 Demonstration in the capital Tunis in solidarity with the struggle in Sidi Bouzid “The roots of this Tunisian 'uprising' are to be found in a lethal combination of poverty, unemployment and political repression: three characteristics of most Arab societies”.  So ‘Tunisian’ uprisings, mass movement, strikes and mass clashes with the state apparatus are on the agenda in all of the Arab countries. This is not really a prediction about the future. This is already happening now in Egypt, Algeria and Jordan!

The Arab regimes and their imperialist friends are following these events very closely. Neighbouring Libya has even decided to open its borders with Tunisia so that unemployed youth can look for a job in the country of Colonel Khadafi. Germany has pledged to invest in the poor central rural region of Sidi Bouzid.

Meanwhile, ‘democratic and human rights-loving Europe’ keeps very silent on the brutal repression of the decaying Trabelsi dictatorship. Not a word of condemnation has even been whispered by any government of the European Union or the United States.

In an unsuccessful attempt to defuse the protests the government has already sacked two ministers, three governors and has made (again) plenty of promises of investment and employment schemes. The regime combines those measures with brutal repression, which have already taken the lives of two demonstrators, injuring hundreds of others and detaining many more.

But the fear of the Tunisian youth has disappeared. Significantly, in the recent days the protests have been joined by the workers’ unions. Today [3/1/2011] the university students resume their courses all over Tunisia. This could be a crucial turning point for the movement.

The Arabic website of the IMT, Marxy.com has published this background article about the new ‘Tunisian Spring’. A translation of this article is available here. Our comrades in Morocco are starting to organise active solidarity with the Tunisian uprising. We call all our sympathisers to do the same and send messages of support to communisme@marxy.com

Videos of the protests