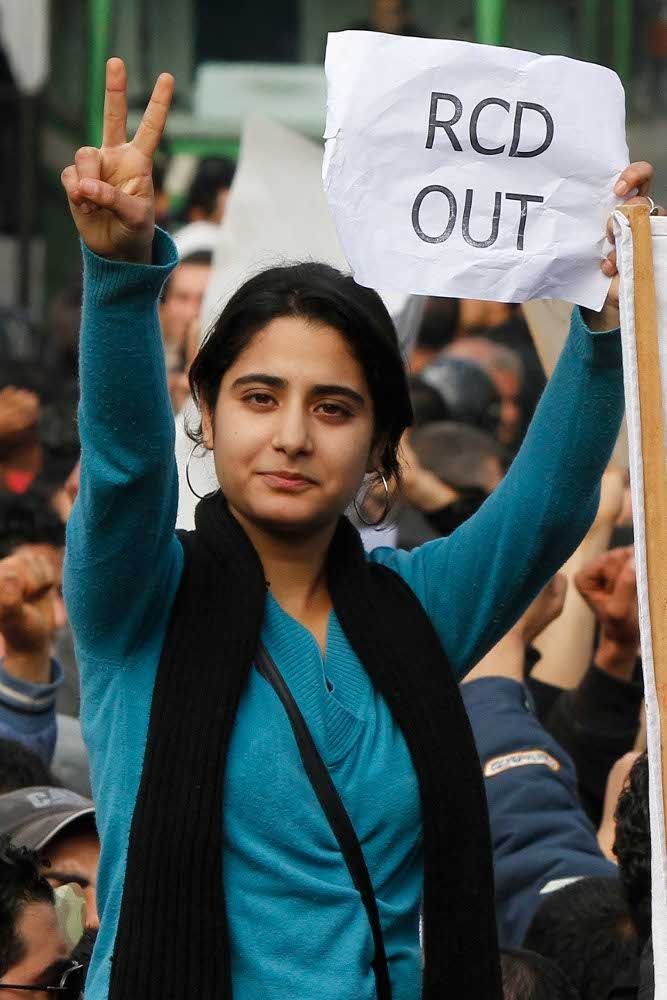 Finally, after a long wait, prime minister Gannouchi announced changes in the government of national unity which was formed in Tunisia after the overthrow of Ben Ali. The masses of workers and youth, for two weeks, have been demanding the overthrow of this government, which they consider as a continuation of the old regime. They have staged massive regional strikes and demonstrations and a sit-in outside the government’s office. This new government of Gannouchi must also be rejected and the people take power into their own hands.

The reason why it took so long for the composition of the new government to be announced was the extreme weakness of the ruling class when faced with the mass revolutionary movement of the people. They needed to find a government which would be accepted by the masses, and above all, which the UGTT national leadership would be able to sell to its ranks.

The composition of the new government is designed to appear as fundamental change, by removing the majority of ministers who were part of Ben Ali’s last government, but in reality to change nothing fundamentally. The ministers of Foreign Affairs (who resigned during the discussions), Interior, Finances and Defence are removed and the new cabinet is stacked with “technocratic” figures and “independent businessmen”. In total, the number of ministers from the last Ben Ali government is down, from 7 to 3. However, three of Ben Ali’s ministers remain; the “new” minister of Defence had already been a minister of Ben Ali in the early 2000s, and above all, the hated Gannouchi remains as Prime Minister.

What legitimacy do these people have to carry out any “transition to democracy”. What role did any of them play in revolution which overthrew Ben Ali? None. This is a transparent attempt of the ruling class (and the US and French imperialists behind the scenes) to present a “clean” government which can clear the masses from the streets and send them back to their homes and off the political arena. Gannouchi himself was clear, as he announced the government reshuffle, when he appealed for Tunisians “to go back to work”. The message was repeated by the bosses organisation UTICA, which showed its full support for the government and appealed “to all economic forces to go back to work”.

Significantly, the Central Committee of the UGTT trade union met in the evening, after the announcement to discuss what position to take regarding this new government. The body voted in favour of accepting this government and Gannouchi as a prime minister, though the union itself would take no ministerial positions in it. The vote was 72 in favour, 11 against and 4 abstentions. Amongst those who voted against were 4 out of the 12 members of the Executive Bureau, as well as the representatives of primary and secondary teachers, health sector workers, postal and telecommunication workers, and also the regional structures of Sfax and Jendouba.

It is clear that the pressure on the trade union bureaucracy on the part of bourgeois public opinion was very strong. As we have reported before, the majority of the EB, headed by the general secretary Abdessalem Jrad, had in fact been loyal to Ben Ali right until the end. In the last few days all sorts of EU and US delegations have been in Tunis, and surely, part of their brief was to bring the UGTT leadership into line. Jrad has also announced that Gannouchi is “prepared to meet with the demonstrators” who have been blocking his offices for the last week.

In the last couple of weeks there have already been strong voices calling for a cleansing of the UGTT of pro-RCD elements. Now these will grow even stronger. It is very unlikely that the UGTT leadership will be able to sell a government headed by Gannouchi to the masses.

On Thursday, January 27, itself mass demonstrations and regional strikes took place again, demanding the overthrow of Gannouchi’s government of national unity. The focus was on Sidi Bouzid, where the regional UGTT had called a general strike. Like the day before in Sfax, the following was almost total and the demonstration was unprecedented both in size and militancy, with 20,000 participating (video and picture gallery).

Some of the slogans were: “Our march will continue, down with the RCD”, “No French nor American (interference), Tunisians will not be underestimated or insulted” and “We mean it, we will kick the RCD gang”. Significantly, the crowd specifically attacked the so-called opposition parties which have been part of Gannouchi’s government from day one: “The PDP and Etajddid betrayed the martyrs”. The PDP started as a “Marxist-Leninist” party and Etajddid (Renewal) is the former Communist Party, both members of Ben Ali’s loyal “opposition”. One of the banners clearly stated the aims of the masses:

“The peoples’ revolution has these demands: suspension of the Constitution, a Constituent Assembly, dissolution of Parliament and the RCD because they are not democratic and the formation of a government of national salvation”. 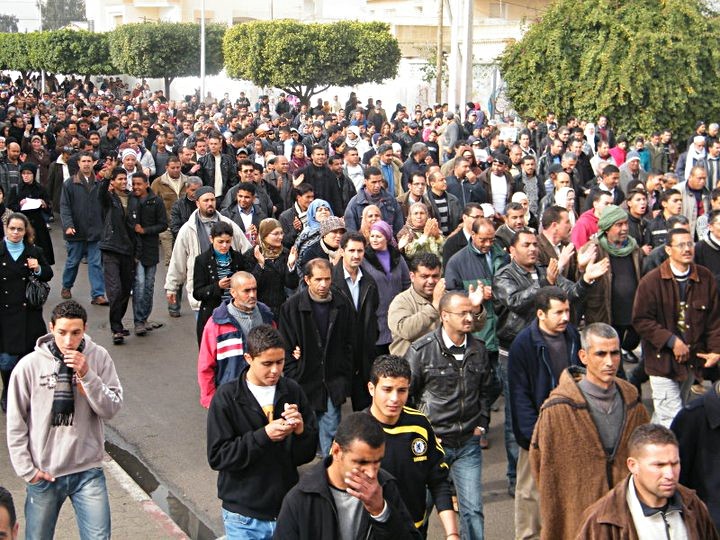 Sidi Bouzid, January 27 As well as Sidi Bouzid, there were also marches in Bizerte, Tunisia, Kelibia, Mahdia (were teachers and students marched together, video), Monastir, Sousse (video), Sfax, where a regional strike had taken a day earlier (video), Kasserine, Tozeur, Gabes, El Kef, Siliana, where there was also a regional strike (video), Tataouine, Zarzis and many other cities and towns, including a large march in Tunis itself. Secondary education teachers also observed a national strike which had overwhelming support.

Meanwhile, the recently formed January 14 Front issued a statement on January 28, rejecting the government reshuffle and calling for a National Conference for the Defence of the Revolution. Such a Conference would be composed of:

The Conference would elect an “interim government” which would be task with “dissolving parliament and other bodies, dissolving the ruling party and its militia, expropriating its property and bringing to account those involved in economic and political crimes, dissolving the political police, …” and above all “the preparation of elections for a Constituent Assembly” which would draft “a new constitution for the Republic of Tunisia civil, democratic and modern aspirations of the Tunisian people to liberty, equality and social justice and dignity.”

This is clearly a step in the right direction, though, we would argue that the Conference should be composed of elected representatives from the revolutionary committees and trade unions, and any “independent personalities” should only be present if they are elected as delegates. This would ensure that the revolutionary workers and youth are properly represented, as opposed to the middle class liberals which played little role in the revolution. It should also be pointed out that the revolution, in order to be carried out until the end, should not only create a “civil, democratic and modern” Tunisia, but also one that is free from exploitation, a socialist Tunisia.

The statements of the Front, probably inspired by its stronger component, the Tunisian Communist Workers Party (PCOT), still show a strong tendency to postpone the social tasks of the revolution to the future and concentrate merely on the democratic tasks. At the same time, they show illusions in all sorts of “independent personalities” and petty bourgeois elements.

In reality, the revolutionary workers and youth of Tunisia should trust no other forces than their own. Themselves alone carried out the revolution, provided the martyrs, organized the regional strikes and mass demonstrations which brought Ben Ali down. They should now take power into their own hands, not only at a local and regional level as has already happened in some regions, but nationally.

Today, Friday 28, there were repeated attempts to convince the revolutionary youth outside the Prime Minister’s office to clear off the sit-in. According to reports we have received, delegations from the UGTT bureaucracy and the Lawyers' Association tried in vain to convince them to leave. They failed and the youth remained firm in their struggle to clear out the old regime completely and were not satisfied by cosmetic changes.

In the last few days, the state has used all the methods at its disposal to try to remove the revolutionary youth from the regions. They were offered money, drugs, agent provocateurs were sent, the Army generals, trade union bureaucrats and lawyers tried to convince them. But they all failed. So finally, the capitalist state showed again its ugly face. Today in the afternoon, as we write these lines, reports are coming in of the Army withdrawing and the anti-riot police brutally attacking the sit-in and dispersing the youth with batons and tear-gas cannisters. They are now regrouping and are being joined by the local population in a big and angry demonstration. Appeals have been issued to the population of Tunis poor and working class neighbourhoods to come in the aid of the revolutionary youth.

The next few hours will be crucial. The response of the masses in the streets today and tomorrow will show whether the government change has worked in temporarily defusing the mass movement. Even if that is the case, the deep rooted social, economic and political grievances that this revolution has raised will not go away easily. The only way they can be solved is if the revolutionary people (the workers, the youth, the women, the poor peasants and the professionals who joined them in the streets) take power into their hands and completely uproot the old regime and all its institutions.