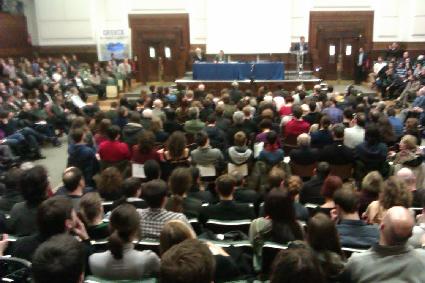 The leader of Syriza, Alexis Tsipras, visited London last week. On the 14th March he spoke in the LSE on an event of the Hellenic Observatory titled “Greece’s way out of the crisis” week. On 15th March, He met with member of the Labour’s shadow cabinet and the TUC and concluded his visit to London with a public lecture at the Friends Meeting House. This event was organised by the Syriza branch of London and attracted over 500 people that packed the venue. Comrade Tsipras started his speech by giving a grim description of the current situation of the Greek economy and society.

“The Greek austerity drives the economy downwards. This not an estimate is a given fact," said Tsipras, while stating convinced that "austerity is not the means to overcome the crisis but the goal of those who impose it and those who put it in action". According to Alexis Tsipras, the Greek and foreign troika seek to have cheap labour, which is achieved by blackmailing people with large debt created by their governments, and expressed the view that if there was no crisis they would have invented it in order to proceed with their plans.

The leader of the Greek opposition strongly criticized the governments of southern Europe by saying that so far there has not been one of them to say no to the austerity policies, but they accepted the absurd measures imposed on them. He also criticized the banking system, saying that it does not serve the interests of citizens, but of capital and emphasized that the goal is to put banks “in public and social control”, when the Syriza will be in government. The first priority of a Syriza government is to abolish all the measures that reduce wages and pensions and gradually restore the minimum wage to pre Memorandum levels and promised to “renegotiate” the Greek loans with the foreign lenders.

Secondly, the Syriza government will renegotiate the state loans with the Greek and foreign lenders. He also emphasized the importance of solidarity that workers around the world must show towards each other and towards a government of the Left. Lastly, he criticized the policy of the government saying that Samaras' agenda has helped to strengthen the power of neo-Nazis because, according to him, "Samaras's party has some hidden extreme right -supporters".

In the question and answer session that followed the questions focused around the issue of socialism under a left government and the rise of the neo-Nazi group Golden Dawn. Rob Sewell, editor of the Socialist Appeal, started the session by mentioning that during his visit in Greece back in 1974 as a member of the Labour Youth he saw the thirst of people for social change and how Andreas Papandreou captured their hearts and minds with the promise of socialism. After Papandreou’s win in the 1981 elections, instead of pressing with socialist policies, he tried just to manage the capitalist system with the well-known results, which is something Syriza must learn from.

Alan Woods, editor of In Defence of Marxism and founder of the Hands off Venezuela Campaign, pointed out that the late President Chavez was immediately confronted with the opposition of the bankers, landlords and capitalists when he tried to act on behalf of the workers and poor people. “I agree with your demands to improve living standards, but there is one problem: you cannot realize these objectives under capitalism. The only way forward is to fight for the abolition and the establishment of socialism.”

There were a lot of people who demanded a clearer vision from comrade Tsipras and put the question of socialism to him. His answer was that nobody can move towards Socialism with decrees and laws, but only with the active support of the majority of the people. He recognized that from the first day,  a Syriza government is going to be faced by a difficult period.  The threat of reaction from the ruling class will be overcome with the help of the Greek people.

Tsipras is trying to calm the nerves of the troika by visiting the USA, Germany and talking to a forum of the Karamanlis Foundation. On Friday, he said that he will postpone the socialist measures until the majority of the Greek people would support them. This was a really vague statement!

Comrade Tsipras promises to “renegotiate” the loans with the troika. The problem with this is that if the EU-IMF troika renegotiates the loans with him, this would send a clear message to the rest of the Southern Europeans that if they elect left governments, they can too get a more favourable treatment concerning their loans. This is not going to happen.

Comrade Tsipras promises to bring the level of the minimum wages and pensions up to the pre-crisis levels, a level which was under the poverty line to begin with. This is hardly something that will excite the workers! Moreover, he doesn’t tell us where he will find these funds, since he won’t nationalize the banks and the big corporations.

A left government which takes any serious measures in favour of the working class will face wholesale economic sabotage from the capitalists and provocations from the capitalist state apparatus, which also includes paramilitary and neo-Nazi groups. A left government which doesn’t have control over the economy will fail in any attempt to reverse the current situation in Greece.

Comrade Tsipras doesn’t seem to understand that if he doesn’t press forward with a socialist programme, the only way of staying in power is by capitulation to the Troika. Any move to abolish the Memoranda without nationalization and workers’ control of the banks and the big corporations will result in the collapse of his government. Tsipras’s speech shows us the urgency of a clearly defined socialist programme, something that our comrades in Syriza are fighting for.

Our comrades of the Initiative for a Communist Tendency of Syriza (see their appeal) are putting forward a clearly defined 10-point Socialist programme for the party:

1) Debt cancellation and immediate abolition of the Memoranda and any measures imposed by them.

2) Heavy taxes on big business and the big wealth.

3) Establishment of workers’ control in companies by elected committees of workers, which in turn, will elect a Nationwide Labour Audit Committee.

5) Nationalization and integration into single entities within each industry of all enterprises in which the state holds even one share of the large firms that are closing, the companies of transport (people or goods), water, energy, telecommunications, mineral wealth, infrastructure and construction, with their management consisting of 1/3 employees of the company, 1/3 consumers-workers (trade unions, etc.) and 1/3 representatives of the government. Creation of a Pan-Hellenic Nationalization and Planning Council of the economy with the participation of the Pan-Hellenic Labour Audit Committee of the working people's organizations (trade unions, professional associations, etc.) and representatives of the government, which will establish a firm basis for the socialization of all major companies in the industry.

6) Nationalization of large landed properties and incentives for the voluntary consolidation of smallholders into cooperatives under state control.

7) Implement in cooperation with the government and Pan-Hellenic Labour Audit Committee a project to ensure a job for every unemployed person, through a program of public infrastructure projects and nationalization and the reduction of working hours as much as it is required in order to share out all available jobs amongst all the workers.

8) Steeply progressive taxation of capital and wealth, direct cost savings from the "freezing" of military spending, the expropriation of church property, and above all, the nationalization program will provide the necessary revenue for an immediate increase in salaries, pensions and allowances within the context of a decent standard of living and the introduction an automatic increase of wage and pensions in line with any increase in the cost of living. Adequate funding of Health, Education, Welfare, Social Security, Culture and Sports.

9) Eradication of the bureaucratic and repressive structures of the existing, bourgeois government and the redesign of the state in a socialist basis with the right to elect and  recall all senior government officials and dignitaries who will be paid the salary of a skilled worker; the exclusion of special repressive forces from labour disputes, putting  the security forces and the army under the democratic control and management of the mass organizations of the workers and the youth; the election of judges by the people and the reform of law in accordance with the interests of working people. For an open discussion by the working people and society of the earliest possible adoption of a Constitution that enshrines the social ownership of the means of production and revolutionary changes in state power.

10) The faithful implementation of this program obviously entails departure from all reactionary, imperialist military alliances like NATO, a conflict with the capitalist EU and its institutions and, inevitably, withdrawal from it. The example of a revolutionary Greece, and an open class appeal to the European workers for a common struggle against capitalism in Europe, for the establishment of the United Socialist States of Europe will disarm imperialism. It would shield the country from external threats and will provide very soon a safe and equitable international position by opening the prospect of pan-European and global victory of socialism.

If you agree with the programme put forward by the comrades of the Initiative for a Communist Tendency of Syriza, you can express your support by signing here.