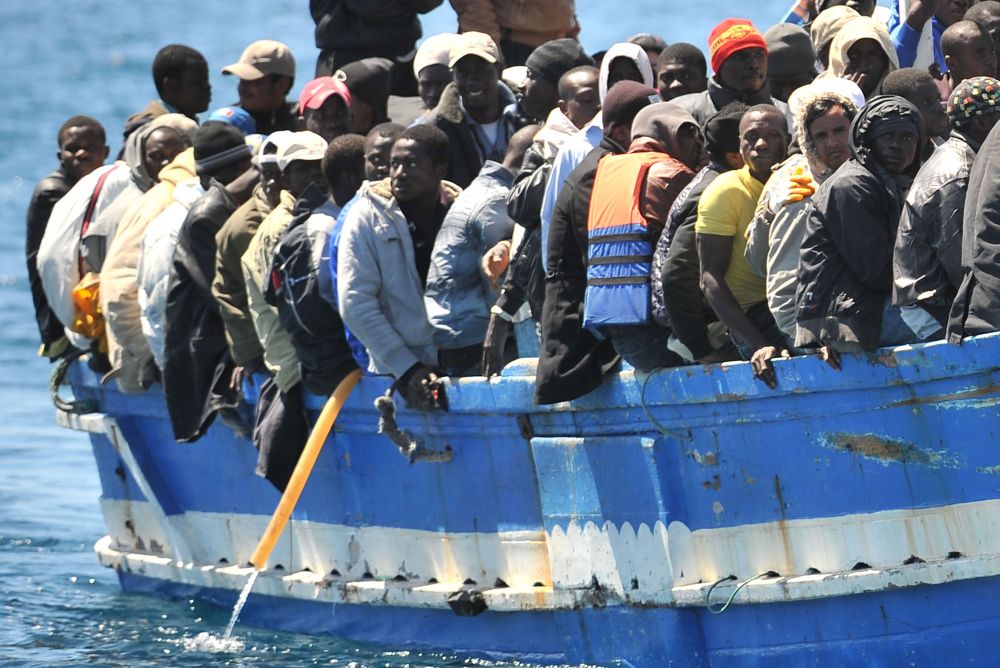 The death of more than 800 people who drowned when a small fishing boat capsized 60 miles south of the Italian island of Lampedusa late on Saturday brings the death toll to of people among people attempting to reach Europe by boat in 2015 alone to 1,600. This tragic event highlights the dramatic situation that has developed in Africa and the Middle East after years of imperialist meddling.

This latest “accident” is a direct result of the cut to the funding of the EU search and rescue missions last year. In a clear sign of the “democratic” nature of the often celebrated “British values”, the British government was the first to withdraw from the mission causing it to be abandoned altogether.

Baroness Anelay, Minister of State of the Foreign and Commonwealth Office in the Cameron government, has openly stated that ,"We do not support planned search and rescue operations in the Mediterranean [and] believe that they create an unintended ‘pull factor,’ encouraging more migrants to attempt the dangerous sea crossing and thereby leading to more tragic and unnecessary deaths.” (Washington Post, April 21, 2015)

What the Baroness is saying is in fact that the EU must not provide a rescue service and leave thousands of people who could easily be rescued, to die in order to scare away immigrants from coming to the EU. The message is clear: “If you try to cross the sea you will die”.

The official Italian sea and rescue operation, known as “Mare Nostrum”, was brought to an end in October of last year and was replaced by the much more limited joint EU Triton “border protection” operation, run by Frontex, the EU’s border agency. The new Triton operation was provided with only a third of the resources available to “Mare Nostrum”.

As a consequence of the closing of the previous rescue service there have been about 17 times as many refugee deaths in the Mediterranean Sea from January to April of this year compared to the same period last year, according to initial estimates from the International Organization for Migration.

If the statements of Baroness Anelay were bad, those in the gutter press, mouthpieces of the ruling class, have been even more blunt about where they stand. Journalist Katie Hopkins, openly stating what the establishment tries to dress in fine language, has said that boats with immigrants should be met by gunships not rescue ships. She then went on to say: “Make no mistake, these migrants are like cockroaches. They might look a bit ‘Bob Geldof’s Ethiopia circa 1984’, but they are built to survive a nuclear bomb. They are survivors”.

After the deaths on Saturday she defended her previous statements saying “Why do we take on everyone else’s problems? We can’t afford to take on these problems. We need to push these boats back.”

Here you have the true voice of the Capitalist class. Behind all the talk about democracy and human rights is the most ruthless calculative cynicism. Being completely discredited by their severe attacks on working people and the ongoing scandals about their lavish and disgusting lifestyles - which includes widespread child abuse and murder - the establishment is trying to whip up a racist mood in order to distract attention from the real issues and find a base to lean on. Never mind a few thousand people dying in the meantime.

Why is there mass immigration today?

Last year, around 170,000 migrants crossed the Mediterranean to get to Italy and as many as 3,500 died. The International Organisation for Migration in Italy estimates that since 2000 over 22,000 migrants have lost their lives in an attempt to reach Europe in search of a better life.

The question is: why are immigrants willing to go through such a dangerous journey, risking everything, as well as leaving their whole life, family, friends and culture behind in order to come to Europe? The real source of immigration is poverty, misery and the barbarism produced by imperialism and its wars in the Middle East and Africa, and the extreme desperation that flows from all this.

According to a new report by the International Consortium of Investigative Journalists and the the Huffington Post, projects funded by the World Bank over the past decade “have physically or economically displaced an estimated 3.4 million people, forcing them from their homes, taking their land or damaging their livelihoods.”

The report also finds that “The World Bank and its private-sector lending arm, the International Finance Corp., have financed governments and companies accused of human rights violations such as rape, murder and torture. In some cases the lenders have continued to bankroll these borrowers after evidence of abuses emerged.

“Ethiopian authorities diverted millions of dollars from a World Bank-supported project to fund a violent campaign of mass evictions, according to former officials who carried out the forced resettlement program.

“From 2009 to 2013, World Bank Group lenders pumped $50 billion into projects graded the highest risk for ‘irreversible or unprecedented’ social or environmental impacts — more than twice as much as the previous five-year span.”

“This investigation comes to the conclusion that the war has, directly or indirectly, killed around 1 million people in Iraq, 220,000 in Afghanistan and 80,000 in Pakistan, i.e. a total of around 1.3 million. Not included in this figure are further war zones such as Yemen. The figure is approximately 10 times greater than that of which the public, experts and decision makers are aware of and propagated by the media and major NGOs. And this is only a conservative estimate. The total number of deaths in the three countries named above could also be in excess of 2 million, whereas a figure below 1 million is extremely unlikely.”

In Iraq alone this has led to 3 million refugees who live in the most desperate conditions. The report says the frequent deaths from the refugee camps are not accounted for and do not occur in the study.

Not only is this situation continuing, but new fronts are being opened at a steady rate. The barbaric bombing of Yemen has already caused thousands to die and more than 150,000 people to flee from their homes. In African countries where the west has been involved in countless civil wars, the situation is not different. This festering wound will continue to exist for many years to come and leave a permanent mark on the lives of all the working people of these countries. These are the conditions which lead to a layer of desperate people fleeing to Europe in the hope of finding some kind of stability and a future for their children.

The hypocrisy of the bourgeois is clearly revealed by these figures. It is a sign of the complete impasse of capitalism which is a threat to humanity in the west as well as in the rest of the world. By whipping up a mood of racism and hatred they are trying divide the workers and poor and play them off against each other while conveniently covering up their own criminal role.

It is not the immigrants who are dismantling the welfare states in the west, it is not immigrants who are laying off workers, it is not immigrants who are avoiding taxes or receiving billions of dollars, pounds and Euros worth of direct or indirect subsidies and bailouts. None of the people involved in the countless corruption scandals, involving billions of pounds, which we witness everyday are in prison. In the meantime, a worker or an unemployed person who bends the rules to get a few pounds or Euros more a month to make ends meet, is treated like the worst scum.

The enemy of the western working class is not immigration, but the ruling classes at home. It is their desperate drive to defend their privileges and increase their profits which is the greatest fetter to humanity. In a society where all the productive capacity exists to eradicate poverty, want, hunger and unemployment, these people are worsening the situation and pulling society backwards - in many places towards barbarism. The only way out of the increasingly desperate situation for all working people, to end austerity, wars and mass displacement,  is to end the capitalist system which spawns it. End the rule of the rich.