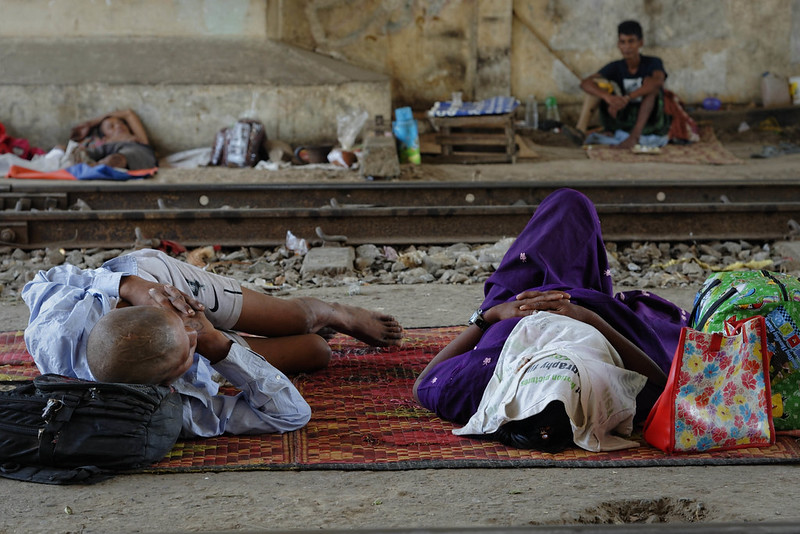 The 10 richest people in the world have more than doubled their wealth since the start of the coronavirus pandemic, while over 160 million people have been driven into poverty. Inequality is killing one person every four seconds, and the poor are four times more likely to die of COVID-19 than the rich. This is all according to Oxfam’s 2022 report Inequality Kills.

From lack of access to healthcare, to extreme hunger, to the impact of climate change, more and more people are suffering easily preventable deaths. Meanwhile, the super-rich are shooting themselves into space, lounging on luxury yachts and ruthlessly profiteering from the pandemic.

Much like Omicron, the ‘billionaire variant’ is out of control, and poses an existential threat to humanity unless this sick capitalist system is uprooted entirely.

Marx wrote that: “Accumulation of wealth at one pole is at the same time accumulation of misery, agony of toil, slavery, ignorance, brutality, mental degradation, at the opposite pole”. Over 150 years later, Oxfam’s report has shown these words are more relevant than ever.

The report demonstrates that inequality has resulted in 21,000 excess deaths every day since the start of the pandemic. While a significant proportion of these deaths are due to lack of access to healthcare, at least a quarter are from hunger, and an increasing number of deaths are being caused by the adverse effects of climate change on poor communities.

Worst impacted are people from developing countries, women, minority groups and all those who are already the most vulnerable under capitalism. The report states that, thanks to economic inequality, the pandemic has “been actively made deadlier, more prolonged, and more damaging to livelihoods”.

The report states that there were 13 million fewer women in employment in 2021 compared to the previous year. 20 million girls are expected never to return to school due to the strain that coronavirus has put on poorer households.

Violence against women has also dramatically worsened since the start of the pandemic. As the report explains:

“That people in poverty, women and girls, and racialized groups are so often disproportionately killed or harmed, more than those who are rich and privileged, is not an accidental error in today’s dominant form of capitalism, but a core part of it.”

While it is certainly no accident when the poor and oppressed suffer disproportionately, it is not any particular ‘form’ of capitalism that is responsible. 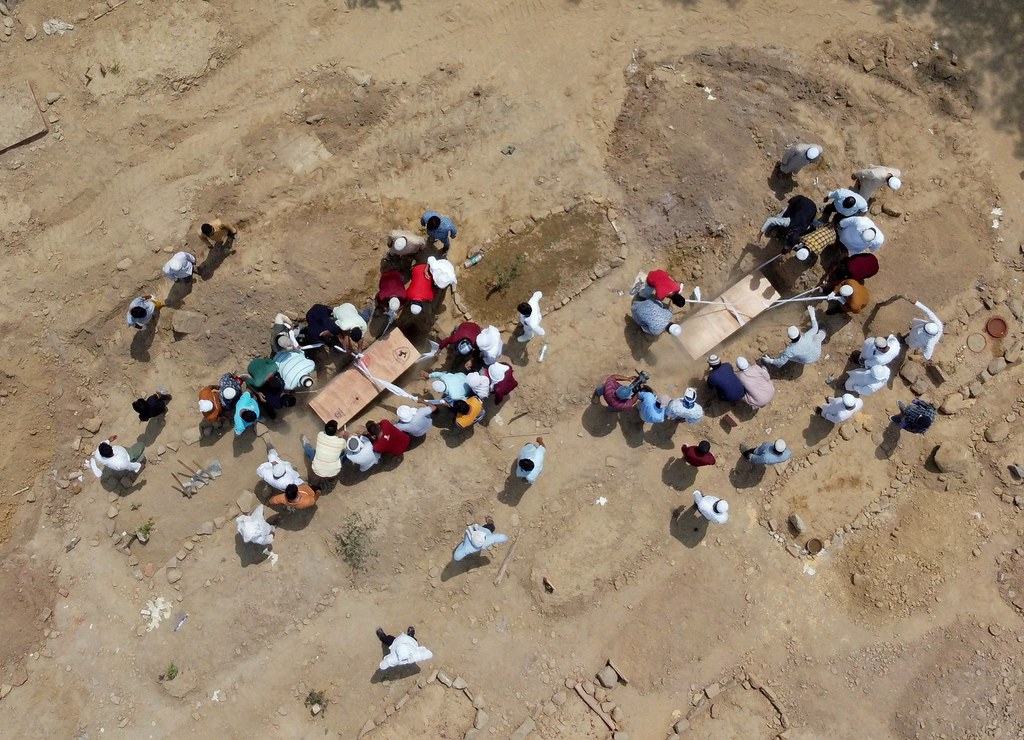 Inequality of income is a stronger indicator of whether you will die from Covid-19 than age / Image: Ninian Reid, Flickr

It is the very nature of capitalism to concentrate wealth in fewer and fewer hands, and in its period of senile decay plunge the vast majority of humanity to ever-deeper barbarism, starting with the most vulnerable.

A major contributor to the higher number of deaths in poor countries is a lack of access to vaccines, due to hoarding by the imperialist countries. The richest nations raced one another to gobble up the global vaccine supply, immunise their populations, and reopen their economies to get profits flowing as quickly as possible at the expense of the rest of the world.

This was aided and abetted by profiteering big pharma companies, eager to maximise their windfalls by prioritising the highest bidders for doses. The tragic impact of the disparity between rich and poor on COVID-19 patients is starkly reflected in the Oxfam report:

“Inequality of income is a stronger indicator of whether you will die from Covid-19 than age. Millions of people would still be alive today if they had had a vaccine — but they are dead, denied a chance while big pharmaceutical corporations continue to hold monopoly control of these technologies”.

The report describes the “strategic racism” of the ruling class, having “weaponised [racism] as a tool to advance free market fundamentalism, to gain support for an economic system that siphoned power from the public and transferred it into private hands”.

The report claims that this weaponisation of racism has been used to maintain control of vaccine production in developed capitalist nations like the USA and Britain, despite there being many viable vaccine manufacturing facilities in Africa and Asia.

The disgusting behavior of the imperialist leaders certainly exposes their callous attitude towards oppressed nations. It is also clear that reactionary politicians in Europe and America exploited racism as part of a ‘culture war’ agenda, for example, Donald Trump spreading lies about the ‘China virus’.

But the reason Africa and Asia were prevented from developing cheaper vaccines locally had little to do with the racist views of western politicians, and far more to do with brute capitalist interests.

Countries like the USA and Britain lobbied on behalf of their big pharma capitalists to protect their intellectual property rights on the COVID-19 vaccines, to ensure they could be exploited for the greatest possible profit.

This is why pleas in 2020, by representatives from India and South Africa at the World Trade Organization, to waive these IP protections were ignored – with disastrous consequences for the entire world, as we saw in the rise of the latest Omicron variant.

On top of that, waiving IP protection on the vaccines would have undermined the very institution of private property, and thus threatened the whole edifice of capitalism itself.

Meanwhile, attempts to alleviate the economic impact of the pandemic have widened the already yawning gulf between the richest and poorest nations widened during the pandemic, Oxfam reveals.

During the pandemic, the International Monetary Fund gave out 107 loans to some of the world’s poorest countries, all of which come with strings attached in the form of ‘structural adjustments’ (i.e. cuts) in order to service the resultant debt.

As well as further crippling these already underdeveloped economies, Oxfam suggests that austerity demanded by the IMF to pay off these loans will cause a severe worsening of “every type of inequality” within at least 73 countries. And thus, imperialism will continue to hold these countries in an artificial state of backwardness.

Billionaires ‘had a terrific pandemic’

This picture of poverty and despair for millions of people worldwide could not be further removed from the daily lives of the world’s super-rich. While income fell for 99 percent of people since the beginning of the coronavirus outbreak, Oxfam reports that billionaires “had a terrific pandemic”, with a new billionaire being created every 26 hours.

The combined wealth of the 10 richest men in the world has more than doubled, growing by roughly $700 billion over the last two years — an increase of $1.2 billion every day. The wealth increase of the world’s billionaires between March 2020 and November 2021 was larger than the previous 14 years of growth combined. This is a rate of wealth hoarding that is unprecedented in all of human history.

The wealth of the 10 richest men in the world has more than doubled since the beginning of the pandemic — a rate of wealth hoarding that is unprecedented in all of history / Image: Wikimedia Commons

The wasted potential here is unimaginable. The profits made during the pandemic by the 10 richest individuals alone would be more than enough to fund a global vaccine rollout, as well as free, universal healthcare and social protection for the world’s entire population. Jeff Bezos alone could afford to vaccinate everyone on earth with the profits he has made since the coronavirus outbreak.

Yet this is not how these parasites have chosen to spend their precious time and money. Rather than ‘wasting’ their money helping save millions of lives, the mega-rich have spent the pandemic enjoying greater luxuries than ever before. The last 12 months have seen huge increases in the demand for expensive goods such as caviar, super-yachts, private jets, champagne and fancy watches.

Luxury car manufacturer Rolls-Royce has reported that 2021 was the most successful period in the company’s 117-year history. In a shameful insult to the victims of the pandemic, Rolls-Royce CEO Torsten Muller-Otvos said: “Quite a lot of people witnessed people in their community dying from Covid. That makes them think life can be short, and you’d better live now.”

To the working class, the idea of spending millions on a luxury car after seeing the harrowing deaths of your close friends or family would be absurd — but this is precisely the mindset of the mega-rich, who have spent their whole lives profiting from the suffering of others.

A similarly out-of-touch statement was made by Carla Sora from Agriottica Lombarda, the biggest caviar farm in Italy, who recently said: “People in lockdown wanted to enjoy themselves, and everybody decided to spend money on caviar”.

This romantic vision of ‘everybody’ tucked away in their homes enjoying caviar and peacefully waiting out a lockdown would be touching, if it were not a shameful insult to those who lost their jobs, suffered domestic abuse or other myriad hardships during the pandemic. There can be no better manifesto for expropriating the parasitic, wealthy few than their own words!

No solution under capitalism

While Oxfam’s report is an astonishing review of the impact of global inequality, it is still unable to provide a solution that tackles the fundamental problem. Abigail Disney, grand niece of infamous exploiter Walt Disney and author of a foreword for the report, claims that, “the answer to these complicated problems is ironically simple: taxes”.

The report comes to similar conclusions, namely a “one-off solidarity tax” combined with “progressive spending and taxation”. US Senator Bernie Sanders also tweeted, in response to the report, that governments should “tax the rich” and “invest in the working class”.

Ultimately, however, the idea that capitalist governments should simply tax their way out of inequality is naive. Inequality is baked into the capitalist system and is a fundamental part of the exploitative process of profit generation that allows the super-rich and the ruling class to maintain control. Asking the capitalist class to reform away their economic and social privileges is to ask a leopard to change its spots.

The only way to stop the millions of needless deaths from inequality is to expropriate the billionaires and use their ill-gotten gains to plan the economy according to the needs of society. It is the task of the working class, not bourgeois governments or billionaire elite, to kick out this rotten system and the poverty and inequality it creates.