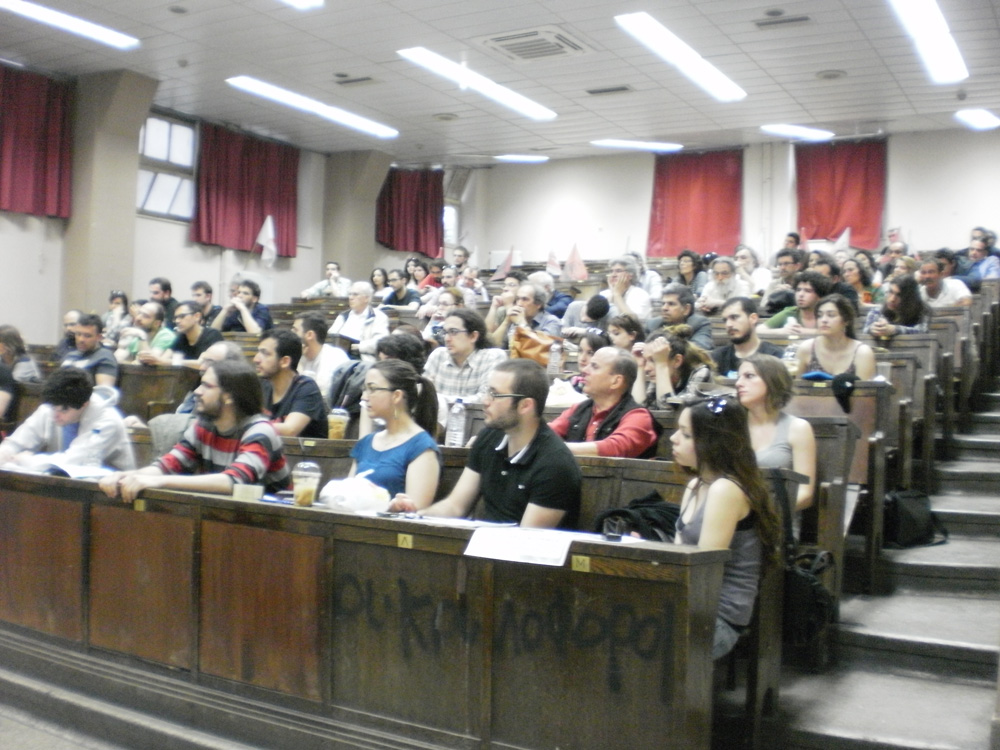 This article was published in the run up to the SYRIZA congress and poses the need for a genuine revolutionary programme to be adopted by the party. We publish it as we await a more detailed report of the congress. What we can say for now is that two comrades of the Communist Platform were elected to the Central Committee of the party.

In spite of the attempt to bury the opposition document of the Communist Platform, comrade Stamatis Karagiannopoulos was able to speak to the congress in its defence, getting the ideas of Marxism across to the 3400 delegates. Around fifty delegates voted for the document, which is significant in itself. The main point is that the ideas of revolutionary Marxism managed to get a hearing in such an important gathering for the Greek working class and youth movement.

It is now a common assumption, and not only for the comrades in SYRIZA, that we stand before a new historic juncture, which has as a central issue the struggle of the workers in ERT [The state TV broadcaster recently closed]. This struggle did not happen out of the blue. On the contrary, it is the result of the accumulated pressure and barbaric attack on their standard of living that the workers, the youth and the pensioners have been facing. The outbreak of this struggle came about only a few days after the uprising in Turkey. This does not only prove the global character of the capitalist crisis but also the international interactions between the struggles and movements of the workers.

While the conclusions that the workers draw are radical (just a quick chat with someone at the courtyard of ERT is enough to convince anyone of how advanced is the consciousness of the people who are now seeking revolutionary solutions) the policy that is currently practiced by the leadership of our party does not meet the needs of the workers nor is it compatible with their level of consciousness.

When the heart of the Greek working class was beating in the courtyard of ERT the comrades of the leadership were right to call all party members to support this struggle by physically being there. The duties of SYRIZA, however, cannot be limited to this. The working class internationally has a unique fighting weapon, capable of overthrowing even the most brutal government: the all-out general political strike (until the government calls early elections). This demand was absent from the proposals of the leadership of SYRIZA throughout this struggle. Instead, it should be the main slogan used by all the comrades in their workplaces, together with a call on the KKE and the unions to embrace it.

This tactic would have many benefits for the movement and for the party. Firstly, it would provide a tangible opportunity to overthrow this Memorandum government and would expose the weakness of the trade unions leaders in the eyes of the trade union rank and file, when the leaders called for a pointless one-day strike (as they did at the end). Secondly, it would open the communication channels with KKE party members creating the basis for the formation of a truly left government.

The reasons why this truly revolutionary tactic was not followed can be found in the abandonment of the struggle for socialism as a concrete task. This is reflected in the manifesto put forward by the leadership of the party and also by the moderate rhetoric adopted by leading members of the party who appear to offer credentials of “legitimacy” during their TV appearances. The shift towards the “democratic” transformation of society was confirmed by comrade Tsipras during his recent speech in Syntagma Square where the historic demand for socialism was only mentioned once in a vague and abstract manner. Instead, we were surprised to hear him refer to the recognition of the obligation to repay the debt and interest rates to the loan sharks (this is clearly stated at 7.11 minutes of the video). This position constitutes a 180-degree turn from the position that we had declared before the elections of not acknowledging the debt as valid, a position that significantly increased the appeal of SYRIZA within the majority of youth and workers.

This shift disappoints, confuses and misleads the members of the party, as it promotes as a feasible option the “democratic” reform of capitalism through a peaceful parliamentary term of a government of the Left. This perspective is wrong. In a period of such deep crisis of capitalism, with no flow of credit for investments and benefits, during an implacable war against all the previous gains of the working class, it is utopian to believe that the system can be humanised, without removing the economic base that it stands on, i.e. the private ownership of the means of productions that only has profit as its sole goal. The fundamental and only truly realistic goal that the party should put forward and fight for is socialism based on a centrally and democratically planned economy.

The struggle for SYRIZA to adopt a revolutionary programme has been elaborated in the manifesto opposed to that of the central committee, entitled “Communist Platform”. It was submitted to the congress by the Communist Tendency of SYRIZA and signed by 130 members from 61 branches in 22 cities. Supporting the Communist Platform – despite and against the unequal and undemocratic way it has been treated by the mechanisms of the party and the Congress Organizing Committee – is necessary so that the congress can give birth to a party which will defend the interests of the working class and socialism.