Share
Tweet
FRETECO (the Revolutionary Front of Workers in Occupied and Co-managed Factories) has also issued a statement of solidarity with the SIDOR workers, signed by several factory councils and union structures.

"Everything that has been privatised, let it be nationalised"
(President Hugo Rafael Chávez Frías)

We, the workers of the companies that are part of FRETECO (the Revolutionary Front of Workers in Occupied and Co-managed Factories), express our full support to our worker comrades at SIDOR, in the struggle for fair wage demands and against the multinational owner which is subjecting the workers to conditions of extreme exploitation.

The SIDOR workers are struggling for a collective bargaining agreement which includes their fair demands in the fields of wages, social conditions, health and safety, etc., and are acting according to the Labour Law.

The privatisation of SIDOR in 1997 was part of the capitalist policies of the leaders of the IV Republic. It was a complete disaster as it meant that thousands of workers were made redundant and thousands of others were contracted out, something which has had serious consequences in worsening the working conditions for thousands of SIDOR workers. 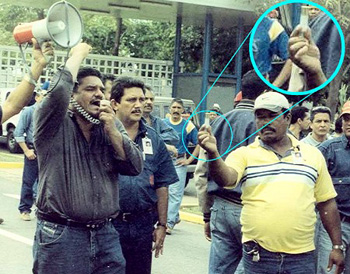 Before privatisation the company employed 18,000 workers. However, as a result of privatisation and the behaviour of the trade union mafias, the numbers went down to 11,000. Today SIDOR employs 4,000 workers directly and another 9,600 work for outside contractors. SIDOR is the company that pays the lowest wages in the iron and steel industry.

Only through the struggle for nationalisation is it possible to win the demands of the workers. The struggle for the improvement of the conditions of SIDOR workers is closely linked to the future of the Venezuelan revolution. If SIDOR continues to operate as a private company, the workers will be subject to further attacks in the future. Capitalism offers no way forward for the masses.

In order to win the struggle at SIDOR and to take the revolution forward, the unity and support of the whole of the Venezuelan workers' movement is needed. Freteco is amking an appeal to all revolutionary workers, the Bolivarian trade unions affiliated to the UNT and the National Ezequiel Zamora Peasant Front to organise a workers' and peasants' conference for the occupation of the land and the factories by workers, peasants and the communities so that they can be run not on the basis of private individual profit, but on the basis of social needs.

The struggle of the SIDOR workers is our struggle, since the bureaucracy of the different ministries has on several occasions made fun of the interests of the workers. They have turned their backs on some of the occupied factories, as was the case at Sanitarios Maracay. In some other cases they have negotiated in favour of the bosses, trampling on the workers' collective bargaining agreements. We cannot accept the situation at INAF, which to this day, two years after it was taken over by the workers, still has not been expropriated and nationalised.

We are also making an appeal for an end to attacks against the SIDOR workers and for the government to accept their just demands. We also call on the working class in general to mobilise in solidarity with the workers at SIDOR and their demand for it to be renationalised.

We denounce the attitude of the Minister of Labour who has acted against the SIDOR workers and in favour of the bosses, the Ternium group.

Factories that are abandoned by its bosses, subject to sabotage or where workers' rights are being trampled on should be taken over, occupied and put into production by the workers.

For the nationalisation of SIDOR!

Read the original in Spanish.