On October 1, Boris Yefimov, Stalin’s loyal cartoonist, died. In his works he followed all the twists and turns of the Stalinist regime. He was particularly vicious in his portrayal of oppositionists and the Trotskyists in particular. 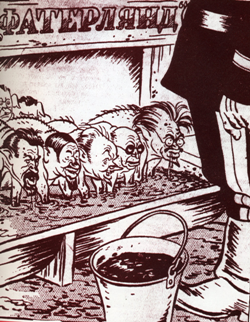 Boris Yefimov died this month at the grand old age of 108. Yefimov was Stalin’s loyal cartoonist, who sold his soul to the devil by caricaturing (and justifying) every twist and turn of the Stalinist bureaucracy.

After studying in Kharkov’s art school he moved to Moscow in 1922, where his brother helped him find a job at Izvestiya. In the early period of the Russian Revolution he originally admired Trotsky. Trotsky recognized his talent and had prefaced a book of early cartoons.

This simple act under Stalin would have certainly meant the death penalty. Many had perished for far less under Stalin’s regime. In fact, Yefimov’s own brother, Mikhail, was arrested in 1938 on his return from covering the Spanish civil war and executed in 1940 as an “enemy of the people”. Boris Yefimov, who by now had prostituted himself before Stalin, would feature such “enemies of the people” as grotesque traitors in his lurid cartoons. It was a spineless capitulation to save his skin. Yefimov eagerly accommodated himself to Stalin’s political counter-revolution. Like so many artists and intellectuals under Stalin, he crawled on his belly before the bureaucratic reaction, which had betrayed the October Revolution.

Yefimov was largely a self-taught cartoonist, with a talent in his cartoons for expressing Stalin’s requirements in attacking his enemies. Stalin put these talents to good use. Fearing his own life, Yefimov groveled before Stalin’s every whim. He was aware of the fact that the past praise from Trotsky could lead to a death sentence, so he chose to prove his loyalty to Stalin by producing a flow of cartoons for use by the regime.

His usefulness guaranteed his life, which spanned the years of tsarism, the October Revolution, Stalinism, post-Stalinism, Mikhail Gorbachev’s reforms, and the collapse of the USSR. He even lived under the newly-born Russian mafia capitalism.

His attacks on Trotsky, who he had once lauded, were particularly unsavory. He expressed in cartoon form the regime’s anti-Semitism, particularly in his portrayal of Trotsky, as well as linking him in the Moscow Trials to the Nazis. It mattered nothing that Yefimov was himself a Jew. He praised and worshipped Stalin while he was alive, and later, after his death, despised him. He praised the Soviet Union but later turned his back on it.

In 1938, his talents were used to justify the Moscow Trials and the murder of leading Bolsheviks. He produced a disgusting caricature of Trotsky, Rykov, Bukharin and others as pigs wallowing in a trough entitled ‘Vaterland’, fed with pigswill by a Nazi officer, to coincide with the third Moscow Trial. In another cartoon called ‘Terror’, Trotsky is depicted on a playing card with a fascist gunman. 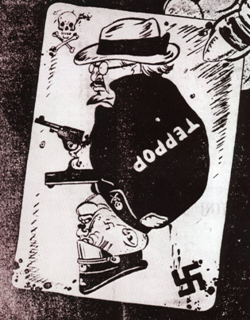 In 1947, Stalin ordered Yefimov to do an anti-American cartoon, to signal the fact that he was breaking the uneasy alliance with the western powers. Having rapidly finished the cartoon – as delay could have meant the death penalty – he was summoned the following day to the Central Committee. There he had found that Stalin had altered the caption. Yefimov kept the cartoon on a wall in his flat. After Stalin died Yefimov said “he was a villain, he murdered many people, a dreadful man. But still, a certain human logic wins out. He is also the person who guaranteed me my life, my freedom, my work”.

In an interview on his 100th birthday, Yefimov said that, “a truly artistic caricature conveys the character and the conduct of the person it depicts ... a cartoon instantaneously gives you both the event and commentary about that event. That is the nature of a cartoon: fast, funny and persuasive”. He forgets the role his cartoons played in the witch-hunt against the Trotskyists who defended the ideas of the October Revolution. He was at the service of the bureaucratic counter-revolution.

He looked back on his work as necessary, even useful. “Propaganda”, he noted, “was born with the Soviet regime in 1917, and through all the 70 years of its existence, propaganda helped to consolidate the society, held it in some kind of strong, unified community; and when the Soviet Union disappeared, there was a kind of emptiness”. What Yefimov prefers to ignore is that there was a river of blood that separated the regime of Stalin from that of Lenin. There was no “continuity” but a sharp and brutal break, in which all the genuine Bolsheviks were physically eliminated.

Propaganda under Lenin was one thing; it was for genuine socialism, workers’ democracy and the world revolution. Under Stalin it was against all this and for the defence of the privileged bureaucracy that had usurped power.

For services rendered Yefimov received two Stalin prizes and, near the end of his life, the honorary title of Chief Artist of Izvestiya. Married twice, with one son, he died a few days after his 108th birthday, on October 1.