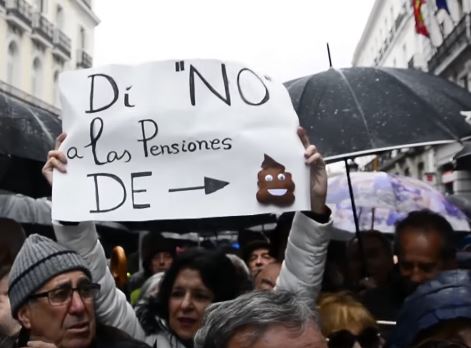 For weeks pensioners have been protesting across the Spanish state against the government’s decision to increase state pensions by a paltry 0.25 percent (against a 1.6 percent inflation rate). The largely spontaneous movement has been growing and is now calling on other sectors of society to join in mass demonstrations on Saturday, 17 March.

Already on 22 February, there were large demonstrations, with 35,000 in Madrid; 25,000 in Barcelona; 40,000 in Bilbao; between 5,000 and 8,000 in cities like Valencia, Sevilla, Valladolid and Salamanca; 3.000 en Vigo and around 500 across many smaller cities. The mood was understandably very angry and also very militant. In Madrid, pensioners broke through police lines and marched right up to parliament:

Bilbao has been one of the epicentres of the movement, known as the Marea Pensionista (the Pensioner’s Tide), with weekly mass demonstrations every Monday. This was the demonstration on 22 February:

The pensioner’s movement has been built by activists from the bottom up without the participation of the official leadership of the main trade unions. Many in the movement consider this union leadership as partially responsible for the current pensions crisis. Attacks on pensions have been going on for many years, with a rise in the retirement age from 65 to 67, an increase in the number of minimum years of contributions required and so on. At the 5 March demonstration in Bilbao, representatives from the main unions CCOO and UGT were booed off:

the pensioner's movement in Spain has been built from the bottom up - at the demo in Bilbao on March 5, representatives of the trade union leaders (which had not done anything up until that point) were booed out pic.twitter.com/6Q1yv6XzHZ

Today, at a special session of Parliament to discuss the pensions crisis, the Rajoy government has insisted that there will be no increase on pensions above 0.25 percent, adding fuel to the flames of discontent. The demonstrations on 17 March promise to be large.

Groups of pensioner activists are agitating and explaining the reasons of their struggle to the public. Many of the activists in this movement are veterans of the struggles against the Franco dictatorship in the 1970s are are now using some of the militant methods they learnt at the time.

In the video below you can see a group of activists from the Madrid Coordination in Defence of State Pensions at the Complutense University dining hall calling on students to join them. “We don’t want you to be forced to leave Spain looking for work, those we want gone are the corrupt government of Rajoy!” one of them says to loud applause by the students:

The mood in Spain is changing rapidly, as shown by the massive 8 March strike and demonstrations, but also a string of labour conflicts which are now coming to the surface, including the first ever 48 hour strike at the largest Amazon logistics warehouse in San Fernando de Henares, scheduled for 21 and 22 of March, where workers voted by 75 percent to come out at a mass meeting.