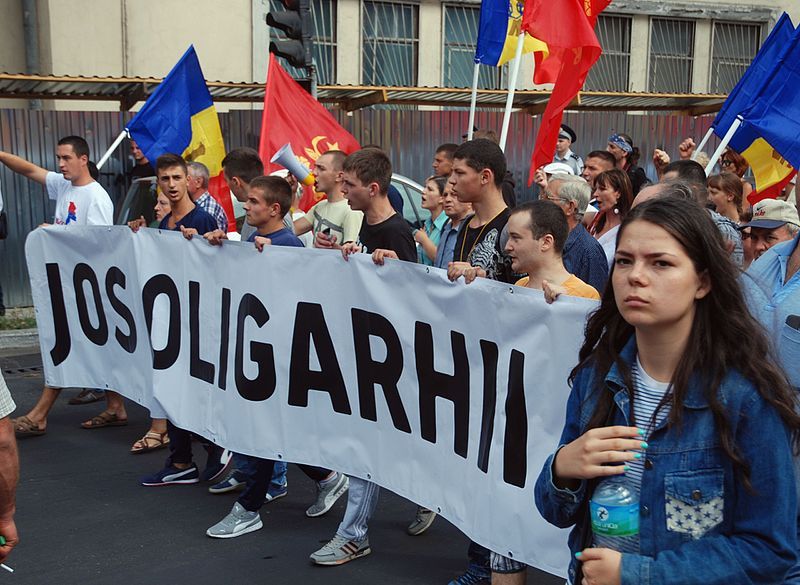 Last Wednesday, a new government in the Republic of Moldova was sworn in to the tune of mass protests outside of its Parliament buildings. Opposition figures claimed an attendance of 100,000 people in Grand National Assembly Square in the capital, Chisinau. Demonstrators clashed with police officers and ultimately broke into Parliament in an attempt to stop the swearing-in-ceremony of Pavel Filip of the Democratic Party as Prime Minister. The new government inaugurates another period of the rule of the Liberal Democratic, Liberal, and Democratic Parties, which have governed under the banner of joining the EU for 5 years.

Moldova has been unable to form a government since a couple of oligarchs stole $1 billion from three of the largest banks in the country. The January protest wave is a continuation of the autumn protests against the pro-EU wing of the oligarch parties. These demonstrations have been characterised by a sense of spontaneous rage and anger at state corruption. The recent demonstrations were organized by the pro-Russian oligarchy’s political faction, the Socialist Party, and the center-right, middle class, civil society organization. Protesters were heard chanting, “Down with the Mafia,” “Billions back,” “Cancel the vote,” “Thieves,” and “Victory”.

The Political Crisis of the Current Regime

The dissolution of the USSR and the reintroduction of capitalist relations created the conditions for the rise of a local ruling class. These oligarchs have wormed their way into sector-specific monopolies while enjoying considerable political power within the state apparatus. The oligarchs’ lives are distant from that of the majority of the population, who live on an average of $186.50 per month. The social conditions of the population make magnify the political reverberations of the banking scandal of 2015. With every new political turn, the clusters of oligarchs with representative parties in Parliament cannot erase the shameless thievery through which they govern.

Officials discovered, over a period of years, that $1 billion was siphoned off from the banking sector in what some claim to be “ the robbery of the century .” In the related investigation, former Prime Minister Vlad Filat, a Liberal Democrat, was arrested, and the central bank governor resigned. The pro-European ruling coalition has been marred in political scandal ever since. Limping from one government to the next, it struggles to be able to maintain legitimate rule in the country. The current instability comes as a result of a Communist- and Socialist-led no-confidence motion that removed the last government.

Participants in Wednesday’s protests had a good instinct as to the people behind the crisis in the regime. They took to chanting, “Down with [Vladimir] Plahotniuc” and “Plahotniuc, don’t forget that your home is in prison.”  Plahotniuc is Moldova’s richest man and a leading Democrat MP. He is suspected by participants in the anti-corruption demonstrations of being involved in the banking scandal. Protests last autumn forced him to flee the country. Many are afraid that he will call the shots behind the scenes of the new Filip government. The banking crisis is the most naked form of capitalist plunder. Plahotniuc and co. are merely the symptoms of a larger, degenerate capitalist class. The identification by the masses of a grouping of oligarchs around the pro-EU government as being particularly corrupt has pushed ordinary Moldovans into the throes of politics. This has transformed into a surge of energy of non-stop, peaceful anti-corruption protests pouring onto the streets.

In Parliament, the leadership of the struggle against the current government has fallen to Renato Usatîi’s pro-Russian “Our Party,” and the Socialist Party, led by Igor Dodon. These parties boycotted the vote of confidence in the Filip government and pushed for the downfall of previous pro-EU governments. Meanwhile, the Communist Party has positioned itself closer to the right, and is in bed with Plahotniuc. In the process, it has bled away many genuine activists.

The position of the Socialist Party in regards to the current government is correct. However, forging a popular front with the Russian wing of the oligarchy, through the manifestation of Our Party, will put it in position to sell out the movement. Usatîi himself is a millionaire and an oligarch with business ties to Russian railways. In the electoral realm the sole differences between the current government and Our Party was over the question of the direction of integration. Stemming from the positions of their wallets, Plahotniuc’s Democrats lean towards Romania; while Usatîi’s party leans towards Russia. In issues other than their personal profit, each party stands in favor of the status quo, or rather, one where scandals aren’t made public.

The leadership of the Socialist Party has already taken steps in the direction of preserving the status quo. In the heat of Wednesday’s protests, as demonstrators were fighting police to enter Parliament, Dodon urged upon them the idea that it was not chaos that was needed, but rather elections! What will elections solve in the coming period?

At this point, the slogan for a new Parliament is to call for a rearrangement of forces bent on stealing from the people. New elections that, hypothetically, put the Socialist Party into some sort of alliance with Our Party may stabilize the crisis of the political regime in the short term. But in the long run, the social contradictions in Moldova, caused by the world crisis of capitalism, will not be solved by elections. Rule of oligarchs, social inequality, and the naked theft of the nation’s money cannot be solved through the ballot box. Dodon’s slogan, at this stage, tempers the legitimate discontent of hundreds of thousands of Moldovans.

The Red Block is a party created out of the autumn movement in 2015. Also known as the Grigory Petrenko group, thus far their leading activists remain in prison. While the regime tolerates mass protests and voices of pro-Russian oligarchs, it moves to silence even the smallest voices of small, radical working class organizations.

The current regime has not been shy of using repressive tactics to maintain their grip on power. Imprisonment and censorship have been used to quell the protests. Moldtelecom, the state broadcasting authority, blocked out the opposition bourgeois media that covered the storming of the Parliament, while extra riot police were bussed in to quell the tide of protestors and re-secure the building. The current Parliamentary opposition does not worry the current regime of West-leaning oligarchs as much as the possibility of mass working class organization does. A mass movement of the working class fighting for its interests threatens the pillars of property relations in Moldova, and thus, oligarchical rule itself.

A Sense of Rage —The Question of Power

The manoeuvres of the Parliamentary opposition are coupled with the movements on the streets. The largest coordinating body for the recent protests is the Platforma Civică Demnitate şi Adevăr (the Civic Platform “Dignity and Truth”). Platforma DA, which means “Platform Yes” in Romanian, is a center-right, non-parliamentary body led by former MPs, lawyers, journalists, and middle-class civil society activists. It took a leading role in capturing the anti-oligarch frustration in society in response to the banking crisis and manifested this in calls for mass protests, which aroused the interests of tens of thousands. Andrei Năstase, the leader of Platforma DA, called the last protests and those of September 6th, “to release Moldova from [oligarch] captivity and to take the country back.”

During the autumn protests they formed a quasi-political body in the squares called the National Assembly Council. This body resolved to launch a general strike until the government fell. At this point, friction took shape between the Parliamentary opposition and Platforma DA in the autumn protests, with organizers having separate rallies. The leadership of Platforma DA sought to have a government of popular confidence led by Năstase and the leadership of the square movement.

The leadership eventually retreated on the issue of the general strike, and instead have opportunistically turned to electoral politics. The largest outcome of the autumn movement was that the Liberal Democratic government fell, de facto satisfying the demand of Platforma DA for the resignation of the Prime Minister, because the Democratic Party initiated a no-confidence motion. In effect, the Democrats manoeuvred with the Parliamentary opposition to overthrow the Liberal Democrat premier. The Democrats thus installed their own in his place within the same pro-EU coalition. This, of course, has not solved anything in Moldovan society; it simply caused a respite in the protest movement for a short period.

This round of protests marks the end of that temporary respite. Platforma DA managed to grab hold of anti-oligarchic sentiment in society and express this through mass rallies, with the immediate goals being the resignation of the President and snap elections. Their official charge against the current government is that it is too corrupt to continue with EU integration, which Năstase and co. look favorably upon. They have tacitly endorsed the pro-Moscow, degenerate Parliamentary opposition by calling for elections. Thus far the demonstrations haven’t called for a general strike. Most of these rallies have come as a result of mutual organization on the part of the Parliamentary opposition and Platforma DA. Both have pulled the movement onto a stern electoralist path, in both slogans and in “negotiations.” After all, Năstase joined with the Socialist, Dodon, in calling for restraint in taking the Parliament buildings. Riding the momentum of the masses, the middle-class leadership of the movement carefully manoeuvres to use the masses as a plank for political victory in future elections. They show themselves distant from the sentiment of rage in society towards the corrupt capitalist class.

At the same time, during a protest on the 24th of January the Liberal Democratic Party joined in a protest. This indicates that there is an open division in the ruling bloc, with the pro-EU oligarch parties split over the premiership. One after another, the political corporals of the oligarchy bow in front of the crowds, for fear that their privileges and power as oligarchs will be stripped away.

The masses in Moldova are entering a new spring that looks to be more turbulent than last autumn. In the process of the protest movements, the tactic of the general strike is a necessary extension of occupations and temporary protests. This is evident in the lessons from the Arab Spring, where strike waves would accompany tactics of mass demonstrations. In Bosnia and Herzegovina, the lack of the struggle entering the trade union movement (along with a flood) contributed to the dissipation of the anti-oligarch movement. In Ukraine, the only reason the Donbas rebels have been able to come as far as they did was because thousands of miners left their pits and entered into politics en masse. The tactic of a general strike will necessarily resurface through the anti-oligarch movement in Moldova.

Any struggle against the oligarchy, in Moldova specifically and Eastern Europe generally, is a struggle against capitalism. It is a struggle against the indignities of open theft, of naked power, and a struggle to reclaim the political organs of society. As such, only the participation of the majority of Moldovan society - that is, working class Moldovans - can assure the erasure of a government of oligarchs. Whether it is the pro-EU or pro-Russian wing of the oligarchy at the helm of the state, the oligarchy still lives, while working people struggle on, paying for the aftermath of their crisis. To disable the political power of the oligarchs, their private property must be confiscated for the betterment of society at large. The only way to get the billions back is to nationalise the key industries, under the control of the workers themselves.

For a political general strike until the government falls!

No to a platform with the oligarchs! No to Usatîi! Down with Plahotniuc!