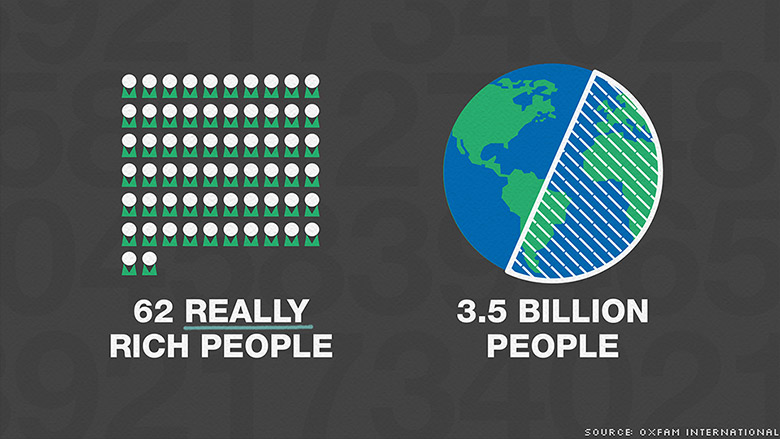 The latest in a series of annual reports from Oxfam, detailing the level of economic inequality in our world, is a striking example of Marx’s prediction that capitalism concentrates wealth in fewer and fewer hands.

The report, released on January 18th, confirms for many what they already know: the rich are getting richer. The wealthiest one percent now own more collectively than the remaining ninety-nine combined. Oxfam had predicted this would become a fact by the beginning of this year. In fact, it became a reality in 2015.

The absurdity does not end there: the richest sixty-two billionaires’ wealth has increased by more than $500bn since 2010, now standing at $1.76 trillion. Despite the total global population growing by 400m in the same period, these sixty-two individuals are as wealthy as half the world’s population. This is capitalism in all its glory. The rich get richer, while billions of people struggle to survive on meagre wages and, according to UNICEF, 22,000 children die each day of poverty.

Oxfam’s report merely puts into words what we are seeing before our very eyes across the world, namely, dropping living standards, wages that do not rise with inflation, public sector cuts across the board, and a squeezing of the working class for everything they’re worth.

In 2008, worldwide debt was around $30 trillion. Despite ostensibly imposing austerity on workers across the globe to reduce this debt, the opposite to what was promised has been achieved. Current worldwide debt now stands at $55 trillion. Every minute this increases by millions. With no view to breaking with capitalism and striking at the heart of the system - the banks and big monopolies - the state inevitably looks to impose even more austerity on the poorest in society.

What the Oxfam report shows is that in the midst of deep crisis, the rich continue living their lives of luxury. The poor are plunged ever deeper into poverty. It is a confirmation of Marx’s prediction of class polarisation - as capital accumulates in the hands of one class, the workers are ever exploited, opening an unbridgeable gulf between the two. In their hunt for profit the capitalists strip the middle classes of their privileges and reduce them to the same low level as the workers. This process of concentration of wealth and Capital in the hands of an ever smaller minority is a part of the Capitalist system and its inherent anarchy.

Oxfam’s reports have been detailing this rise in inequality for a number of years. It is no wonder they have been threatened with the removal of their charitable status in a number of countries. In 2010, 388 billionaires owned half the world’s wealth - enough to fill a jumbo jet. The 2014 report, “Even it Up”, showed that by 2013 that figure had fallen to eighty-five - enough to fit on a double-decker bus. It is now sixty-two, enough to be seated comfortably on a single-decker coach. In capital terms these sixty-two humans are “worth” 3,600,000,000 other humans.

This club of the ultra-rich, on the current trajectory, will only need to travel by mini-bus by 2020, adding further savings to their cash-piles. You might well ask, at what point will one person own as much wealth as half the world?

Oxfam’s statistics and the extreme poverty visible on the streets of even supposedly wealthy nations show the system is no longer sustainable. A backlash is becoming evident across the world as waves of protest movements develop in one country after another.

The solution is clear. The system is preparing a revolt. We must take our destiny into our own hands. Capitalism no longer furthers the needs of humanity, and must be swept away. Wipe out global debt by ending the rule of the banks. Expropriate the sixty-two billionaires, the one percent, and the banks and monopolies that are the basis of this rotten capitalist system.