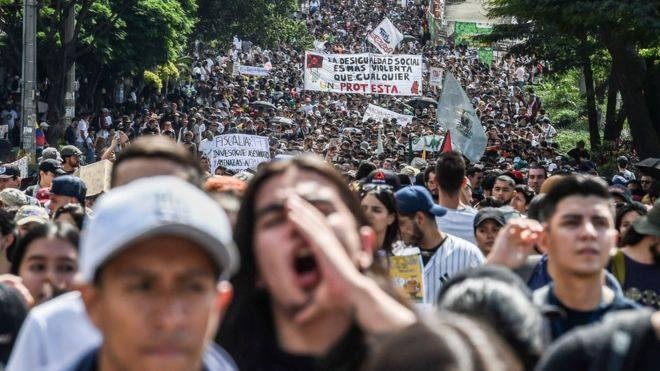 The situation in Colombia is advancing very rapidly after the national strike on 21 November. What was a one-day strike became a permanent and daily protest that is already a week old. The protest did not stop, despite the curfew and militarisation decreed in the capital Bogotá (and in Cali) by the reactionary Duque government. The death of the young Dilan Cruz, who was shot by a tear gas canister directly in the head by ESMAD (Mobile Anti-Riot Squadron) has shocked the country. In response, the National Strike Committee decided to call for a new national strike on 27 November and to include among its demands the dismantling of ESMAD.

The national strike was again massive, with large marches in all the major cities. Tens of thousands marched in Cali, Medellín, Bucaramanga, Cúcuta and in the capital Bogotá, where they filled the central Plaza Bolívar for hours, as well as in dozens of other cities in the country. After eight o'clock at night there were still 10,000 people in Bogotá on the streets at three different rallying points.

We are witnessing the explosive irruption of the masses in politics. Comrade María J. Espinosa describes the mood in Bogotá:

“These are not normal days. When you go down the street every conversation has to do with the situation in the country. Nobody cared that a ban on the sale of alcohol was decreed on Friday. The occasional beer was seen out there, but the end of the day is now usually used to discuss the events. Gradually and spontaneously there are initiatives to organise popular assemblies and that they become coordinated nationally.” 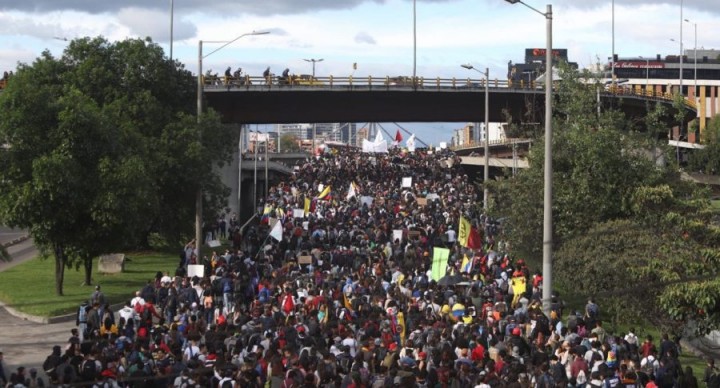 The national strike saw marches in all the major cities. Tens of thousands marched in Cali, Medellín, Bucaramanga, Cúcuta and in the capital Bogotá, as well as in dozens of other cities in the country

Although the neighbourhood assemblies arose spontaneously from the movement itself, now the Strike Committee, composed of the main unions and organisations, has called for "the holding of union, communal, popular and neighbourhood assemblies during the weekend throughout the country, to coordinate mobilisation tasks." A national meeting of strike committees and social organisations is also being called for 7-8 December.

In reality, there is a very critical and distrustful environment towards these organisations, combined with the fear that the movement can be taken over and appropriated from above. For example, in the neighbourhood assembly of 26 November in Teusaquillo, Bogotá, it was agreed that “national organisations do not necessarily represent the territories, nor the citizen movement that has been manifesting.” It was demanded that “the dialogue with the president must be broadcast live by national channels and/or by social networks via streaming, for the knowledge of all citizens” and finally “to turn the popular assemblies into cabildos abiertos [open councils]”.

This is the same trend towards the emergence of forms of self-organisation that we saw in the uprising in Ecuador last month and we have now seen in Chile.

Rage of the people

Police repression continues throughout the country. On Tuesday 26 November, ESMAD entered the National University, shooting at close range and using armoured vehicles against a peaceful student protest. On the same day in Medellin, an individual came out of a car and shot the protesters with a firearm. He was then arrested by the police who treated him very politely, as if they knew who he was. But the fact is that repression, which has not stopped the movement, reflects the weakness of the government.

President Duque has combined the carrot with calls for a "national conversation." On 26 November, he called the Strike Committee to a meeting at 7 in the morning, but when its members realised that this was an attempt by the government to involve them in its "conversation" rather than negotiate the Committee's 13-point demands list, the Committee members walked out.

The Duque government, which was only elected as recently as June 2018 with 54 percent of the votes, has become extremely unpopular, with a disapproval rate of 69 percent. Even traditional fiefdoms of uribismo [the right-wing paramilitary movement around former president Uribe, of which Duque is a representative], such as Medellín, where Duque took 72 percent of the votes in the second round of the presidential elections have experienced mass demonstrations and cacerolazos (banging of pots and pans in protest).

The movement that has been unleashed in Colombia reflects the enormous discontent accumulated by the economic policies of successive right-wing governments, the killings of social leaders, the enormous inequality in society, the cuts in education, etc. According to the OECD, Colombia is the fourth most-unequal country in the world, and 1 percent of the population accounts for 20 percent of income.

The government may try to calm the movement by making some minor concessions. On the other hand, many in the movement demand an indefinite national strike to increase pressure against the government.