Share
Tweet
On Thursday March 30, nearly one thousand Venezuelan trade unionists gathered in a preparatory assembly in order to discuss the urgent tasks of the labour movement and to promote the celebration of a new national congress of the UNT, the National Workers’ Union.

On Thursday March 30, nearly one thousand Venezuelan trade unionists gathered in a preparatory assembly in order to discuss the urgent tasks of the labour movement and to promote the celebration of a new national congress of the UNT, the National Workers’ Union. Although there was some confusion surrounding this meeting, with some people claiming that this was indeed the national congress – without any delegates having been elected – what the meeting showed was a militant mood on the part of the rank and file of the UNT and a desire to build the organisation as a tool in the revolutionary situation. 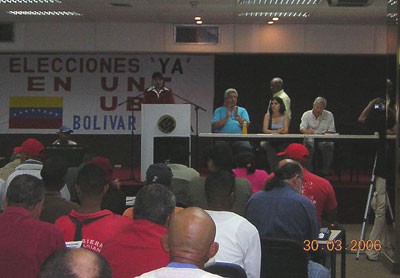 The meeting-hall in the Parque Central had chairs for some 700, but many people were standing in the aisles, thus filling the hall to maximum capacity. The organisers were mostly people around the C-CURA (Corriente Clasista, Unitaria, Revolucionaria y Autónoma) led by Orlando Chririno, but also included well-known trade unionists and regional coordinators of the UNT throughout the country.

Stalin Perez, a national coordinator of the UNT, opened the meeting with a speech emphasising the need for a revolutionary trade-union confederation that firmly rejects imperialism. He stressed that it was necessary for this preparatory assembly to call for a real national congress of the UNT. When the trade union was founded in 2003, there were no real elections of the national coordinators, but back then it was agreed to have a national congress within 2 years. Unfortunately some bureaucratic sectors within the UNT are trying to prevent the holding of a new congress because they fear losing their positions. Others are arguing that there are no conditions for a congress and that this should be delayed until after the December presidential elections.

Among the international guest speakers was Serge Goulart, a Brazilian coordinator of CIPLA and INTERFIBRA, factories occupied and run by the workers. Serge warmly welcomed the idea of a revolutionary UNT, and said that the Brazilian workers look to the revolutionary process in Venezuela with passion and energy and as a real source of inspiration. Basically the struggle of the working class is the same in all countries, the class struggle is thus international in its very nature.

A remarkable intervention was made by Luis Primo, national coordinator of the UNT and regional coordinator in Caracas-Miranda, who has just returned from a successful speaking tour in the United States organised by the Hands Off Venezuela campaign (see: www.ushov.org/). Luis made it clear that it is not just a question of holding a congress and electing a leadership but that it is indispensable to discuss and elaborate a real strategy for the UNT and do this in the context of the Bolivarian revolution and the second Battle of Santa Inés that has been launched by Chavez. The aim should not just be to achieve 10 million votes for Chavez in the December presidential election, but to start the socialist transformation of Venezuelan society. Only in that way is it possible to solve the daily problems that workers face in the workplaces. He explained that there should be no contradiction between holding a congress of the UNT and the presidential election campaign. On the contrary, the best way to ensure the full participation of the organised working class in the electoral battle is to have a democratic and well-organised UNT, and to see this as part of the struggle for socialism. 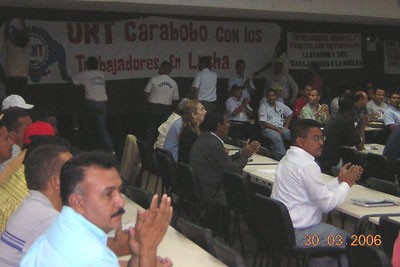 The vast majority of speakers reflected a militant mood and a strong desire to push the building of the UNT forward and connect it with the local ongoing struggles of workers in Venezuela. Ricardo Galindez, from the state of Lara and editor of El Topo Obrero, put forward the importance of the newly formed Revolutionary Front of Workers in Companies Occupied or under Cogestión, which is organising a march on Tuesday April 4, and appealed to all those present to participate and step up the work in solidarity with these comrades who are fighting to maintain and generalise workers’ control.

As one of the last speakers, the Spanish comrade Miguel Campos, spoke on behalf of the international Hands Off Venezuela campaign. In his intervention he explained the work of the campaign, which is now present in around 35 countries and has gained important support among workers and youth who want to understand and stand in solidarity with the developments in Venezuela. He went on to explain that a very important aspect of the work in the campaign is precisely to promote the UNT as the revolutionary trade union in Venezuela and get the big trade union confederations abroad to break the relations with the corrupt and counter-revolutionary leaders of the CTV. This has borne fruit with important successes in the British TUC, Amicus, NUJ, the Italian FIOM-CGIL, among other big unions.

The comrades of the CMR (Revolutionary Marxist Current) had a stand with numerous books and pamphlets and was the only place were Marxist classics were available; it found an important echo amongst many of the trade unionists present. The CMR also published a declaration that outlines the basic tasks of the working class and the UNT in the Bolivarian revolution.

All in all this assembly reflected the mood of the rank and file to push forward the building of the UNT and for the holding of a national congress. An appeal was also made to the other sectors of the UNT, especially the FBT (Fuerza Bolivariana de Trabajadores) led by (among others) Jose Gil, and the sector around Marcela Máspero to participate actively in the discussions. The meeting agreed to make a joint proposal to the national coordination committee of the UNT to organise the national congress for May 26-28.

The next step is for the left to fight to transform the UNT into a real organ to assist and lead the struggles of the working class. The objective situation in Venezuela is extremely favourable for the launching of an offensive on part of the workers. Instinctively, workers throughout the country have tried to confront the bosses, taking over a number of factories and demanding that they be expropriated by the government. This was the case with the workers of Venepal (now Invepal) situated in Morón, Carabobo, a struggle that was won and inspired thousands of workers to follow suit. What is needed is an organisation that can unite these groups of workers into one unified movement and step up the factory occupations as part of a plan to destroy the power of the bourgeoisie and march towards socialism.

The comrades of the Inveval factory in Los Teques, south of Caracas, have taken a most important initiative in this direction with the setting up of the Revolutionary Front of Workers in Companies Occupied or under Cogestión. The left inside the UNT must work to help this initiative and put the full might of the Venezuelan labour movement behind the active struggles of the workers. In this way the labour movement can put itself in the vanguard of the revolutionary movement and begin the socialist transformation of society.