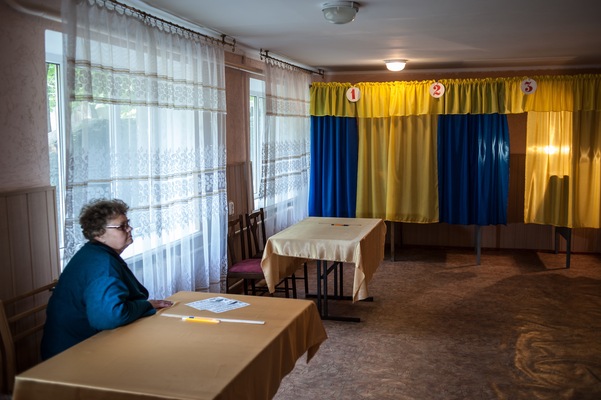 The events that led to the holding of the latest Ukrainian presidential election started with a demand for EU-integration. So it is fitting that the election with the lowest participation (estimated at around 55% by the Ukrainian Electoral Commission) in Ukraine’s history was held on the same day as the EU elections, which had an even lower participation of 43%. The first round was won outright by oligarch Petro Poroshenko, scoring 54% with 80% of the votes counted. Yulia Tymoshenko was runner-up at a distant 13%, while fellow populist Oleh Lyashko took just over 8%.

Was the abstention only in the East?

Western dignitaries and media were quick to praise the election of Poroshenko as part of Ukraine’s “path to democracy”. Even before the election, there were stories on the destruction of voting booths in the East of the country, as part of a pre-emptive justification for the high abstention rate. However, there have been significant abstentions in the Western regions of Ukraine, which were the base for the protests against Yanukovich. There are strong indications that the regime in Kiev does not have majority support in any region of Ukraine, let alone the East. 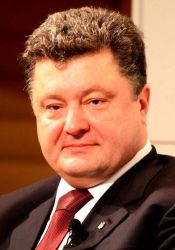 Petro PoroshenkoPoroshenko is the owner of the chocolate manufacturing conglomerate Roshen and the influential Channel 5 television station. Poroshenko was able to win by such a wide margin on the back of a massive media campaign, a campaign budget of almost $8 million (the average Ukrainian wage is around $250/ month) and due to the fact that the corrupt activities of his main rival Tymoshenko, and others, had been much more publicized.

Although his media presented him as a developer of Ukraine’s economy, the truth is that the vast majority of the chocolate production that he used to make his estimated $1 billion fortune was gained from ruthlessly privatizing factories that existed during the Soviet Union and by reducing the workforce and working conditions. Many have forgotten that Poroshenko was instrumental in founding the Party of Regions (PoR), the party of ousted president Viktor Yanukovich in 2001. He then switched sides in support of the so-called “Orange Revolution” in 2004, which brought to power Viktor Yushchenko. Poroshenko served under Yushchenko in several ministerial positions and in the process enriched himself.

When Yanukovich was elected in 2010, Poroshenko saw an opportunity to switch sides again and served as a minister in the new government. However, as the Maidan movement started he decided to back it in order to make sure he stayed close to power.

Prospects for consolidating power in the midst of rebellion

Viktor Yuschenko, whose policies were economically liberal and socially nationalist, only lasted one term in power, failing to do anything to prevent social regression and incurring debt with the IMF, while the oligarchy continued to enrich themselves. To say that Poroshenko enters situation considerably more unstable is a massive understatement.

The economy was knocked on its back in 2008-2009 after the global market crash, collapsing by 15%. The temporary recovery experienced elsewhere was virtually not existent in Ukraine, which was already in too much debt to produce any serious stimulus package, with foreign investment decreasing each passing year. Essentially, the economic crisis that led to the removal of Viktor Yanukovich is even worse for Poroshenko, and this is only the beginning.

The east of Ukraine - its industrial base accounting for 40% of all exports - has been in revolt against the government since it came to power at the beginning of the year. The movement certainly does not contain only Russian agents and separatists as the Western and Ukrainian media has repeatedly suggested. That the Russian government immediately recognized these elections further proves this. The movement in the east is a mass-popular movement against the actions of the illegitimate government in Kiev.

What were these actions? Firstly, after the ousting of Yanukovich the government proceeded to install local oligarchs as the governors in Kharkov, Donetsk and Dnipropetrovsk. They also passed a bill in the Rada revoking previous legislation giving Russian language official status at a regional level. Furthermore, they began what is only the beginning of the IMF-backed austerity measures by drastically increasing the price of natural gas. When people began to protest these measures and occupy government buildings, their response was to send in the Ukrainian army to try to crush them in a so-called “anti-terrorist” operation.

When this proved insufficient, due to the reluctance of many soldiers to fire at their own people, they began recruiting fascist militias into the National Guard, the same fascist thugs who were responsible for the murder of 40 protestors in Odessa among many other atrocities against the citizens of Ukraine’s eastern regions and violence against left-wing activists. The recent moves to ban the Communist Party further exposes the very reactionary nature of the new government.

Immediately after the results, Poroshenko announced that he would increase the scope of the military operations against the rebels in the east. Poroshenko will have to rely even more on the fascist National Guard battalions, as further deployment of the Ukrainian army would only increase the danger of a full-on mutiny against the government. These measures will only further galvanize the movement fighting the fascist thugs.

In the economic sphere, Ukraine continues to be in heavy debt and on the verge of default. Any “reforms” will certainly be austerity measures leading to cuts in social services and subsidies. This prospect of massive foreign investment rescuing the economy is absurd considering the extent of the global economic crisis and the possibility of increased protectionism in the EU. The only funding that will be available to the government will be through foreign loans tied to further cuts in social spending.

This will force the people in the Western and Central regions of the country to see past the nationalist war hysteria fed to them by the media and into action against the government. This opens the door for a common movement in the east, where there has been increasing anti-oligarch mood and growing social demands. The success of this movement will require the transformation of the struggle from one between nationalities, to one against the oligarchy and capitalism. This cannot be realized by farcical elections, but by united class struggle.