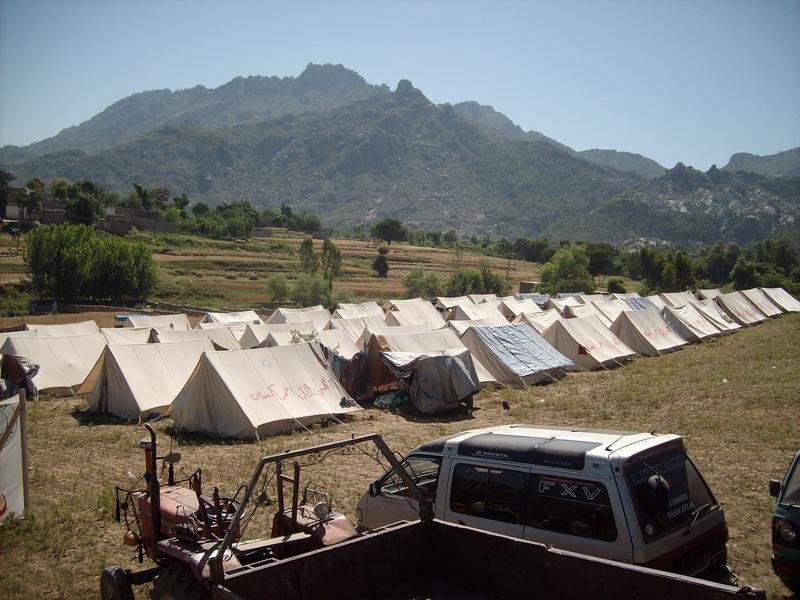 The plight of the people of war torn Swat/Malakand is a terrible one. They are the innocent victims of the conflict inside the Pakistani state and very little is being done by the authorities to help them. Many families are living out in the open. The PTUDC has organised volunteers and set up camps for those fleeing from the war zone. They need financial aid and we appeal to you to help.

A bloody war is going on in Swat, Malakand and other parts of Pushtoonkhwa. This war is a result of the explosion of the internal contradictions between various factions of the Pakistani state. This war is not hurting any of the Taliban or any other armed groups but merely the workers, peasants, poor people, women and innocent children who are being killed in large numbers. These workers and peasants are victims of the reactionary forces of both the Taliban and the state's Army operation. The people hate both of these forces.

This is a war between "black and white Capital" and it has killed hundreds of innocent people and thousands have been injured. Millions have been forced to leave their homes and are wandering on the roads and streets in search of food, water and shelter. The deal between the Army and the Taliban has solved not a single problem and neither will this war solve any.

Before this military operation started no planning was made for evacuating innocent people and no transport has been made available for those who want to flee their homes. People are living out in the open. Government relief efforts are scarce and have utterly failed. The bureaucrats in the state institutions and the people in the private run NGO's have now started a lucrative business of collecting aid for these people and filling their own pockets. Many fundamentalist organizations have set up their own camps across the whole country to collect relief goods. These are the same organizations against whom the operation is being carried out.

The prices of all utility items have increased to almost 100 times more than before the operation started. To move from the war zone to relatively secure areas thousands of rupees are required which poor people cannot afford. To travel a distance of 100 km 10-15,000 rupees are needed while previously it was around 200 Rs. Some poor people are travelling hundreds of kilometres with their families on foot. One can see people with swollen feet in the camps and can feel the agony which they have suffered. Some people have been forced to leave their disabled and small children back in their homes in the war affected areas because they could not carry them along this hard journey. 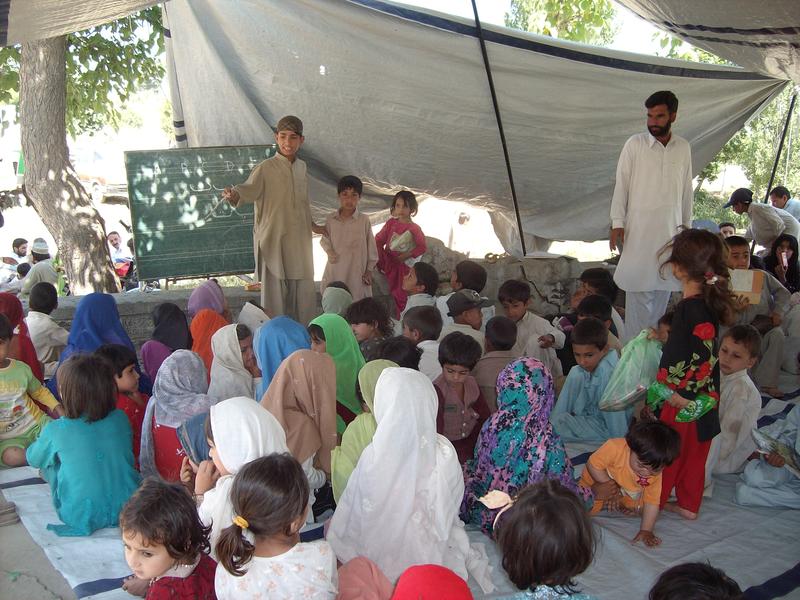 Given the plight of the masses in these regions, the PTUDC has set up “Revolutionary Defence and Relief Committees” in this war-torn region. Suffering and misery is on the order of the day for these affected people who see life slipping from their hands every day and death coming ever closer. Also various diseases have spread among the people living in camps and there is no medicine and no doctors. Problems like diarrhoea, asthma, skin and eye allergies and other viral diseases are affecting thousands of people and there is no medical help for them.

In the relief camps only 10 percent of the total affected people are accommodated, and even these are sites of misery and helplessness. Most of the people are living with their relatives or living in the open. Many families have been split up and many children have been lost. 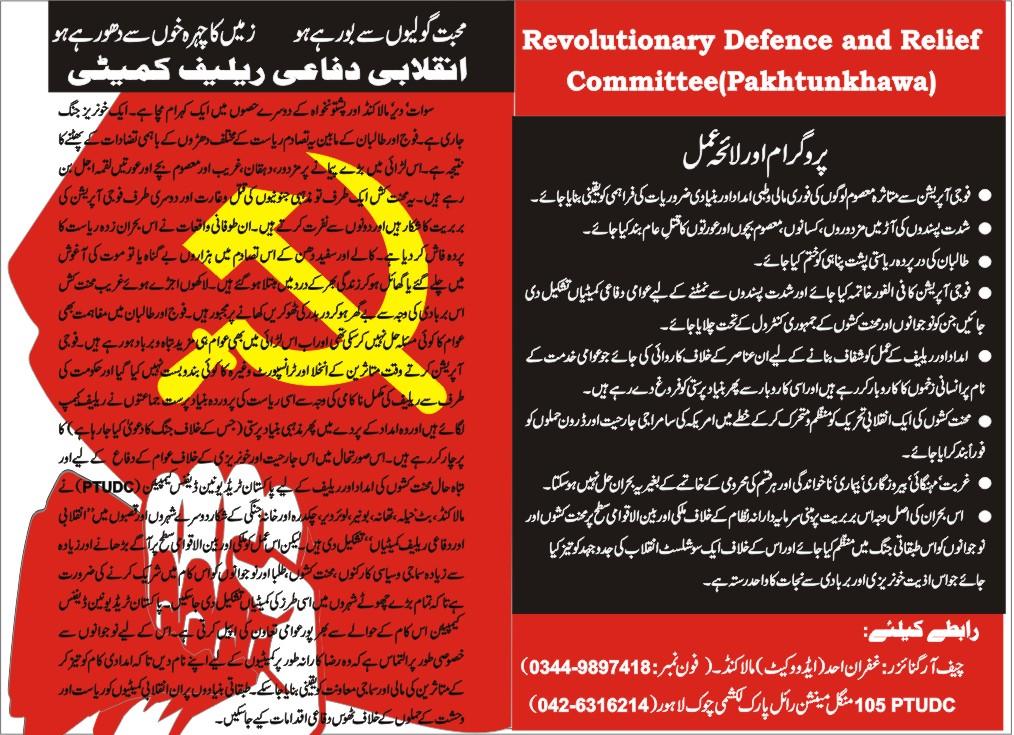 Leaflet of the PTUDC. A camp has been established in Rangmala near Batkhela in Malakand by the PTUDC in which 10,000 people are living. This camp is in the War Zone and it is for people who cannot travel outside the war-affected zone and are hampered by lack of transport facilities.

Our comrades have collected bedding, crockery, medicines and other necessary items for the camps in thousands of numbers. Two meals are daily cooked in big utensils for these people. Food ingredients for these meals are being gathered by the comrades who are collecting funds in all the villages around the camp. Volunteers are coming in big numbers to join the PTUDC in these efforts and committees are being set up rapidly.

A big public meeting is being organised next week where nearly 15,000 people from around the district of Malakand will take part and where the demands and programme of the PTUDC will be put forward.

We appeal to the workers of the world to come forward in this moment of need and support this revolutionary effort in Malakand. These committees need to be organised everywhere and funds should be collected to support these people and bring them into the struggle for revolutionary socialism.

We will try to send regular updates from the Rangmala camp near Batkhela in Malakand for the readers of this website.

By Credit or Debit card

Donations by credit and debit card can be made here. (Courtesy of Wellred Books.)

You can donate online via PayPal.

The situation in the Rangmala Camp in Malakand near Batkhela

By Comrades Karim and Sajjad in Malakand 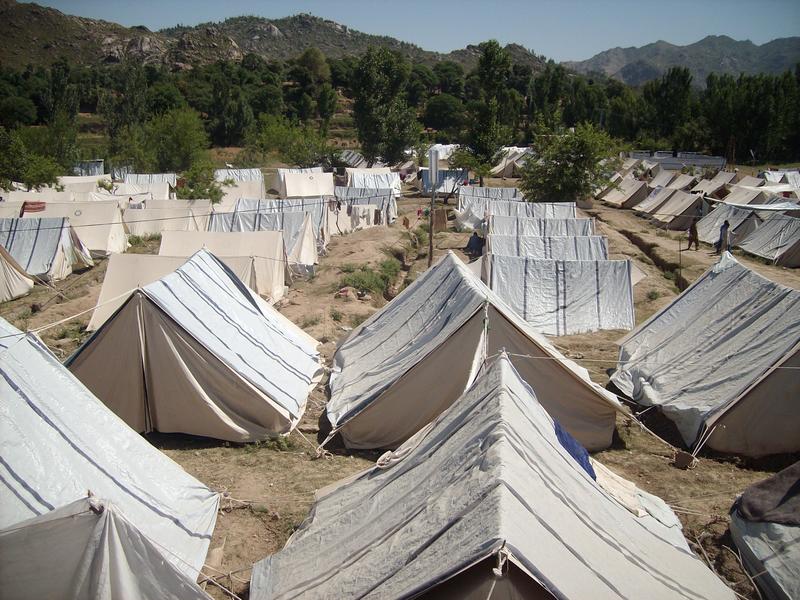 Today the workers of the Revolutionary Defence and Relief Committee (Pushtoonkhwa) made a detailed visit to the internally displaced persons (people forced to flee their homes but who, unlike refugees, remain within their country's borders, or IDPs for short) of the Rangmala Camp in Malakand near Batkhela. They received a great response from the people. A great number of people and workers supported the measures taken by the committee. They assured the committee of their maximum possible support. The RD&RC chief organiser, the area in-charge and other committee members carried out a large amount of work and helped the people. They helped the people and created committees for the purpose of health, education, administration, security, information, registration and political education. A number of groups were created, a leader was selected for each group and each group was assigned a specific task. A group meeting was also held among the workers of the committee and everyone assured the committee of their utmost support.

The establishment of the committee (Revolutionary Defence and Relief Committee Pushtoonkhwa) was an urgent task of the moment. They agreed to increase the number of committees up to 10. They appealed to the people to participate voluntarily in the committee. They received a great response from the people and great numbers participated within a very short time. We are expecting positively that we will get volunteers in great numbers and we will achieve the target of 500 volunteers. 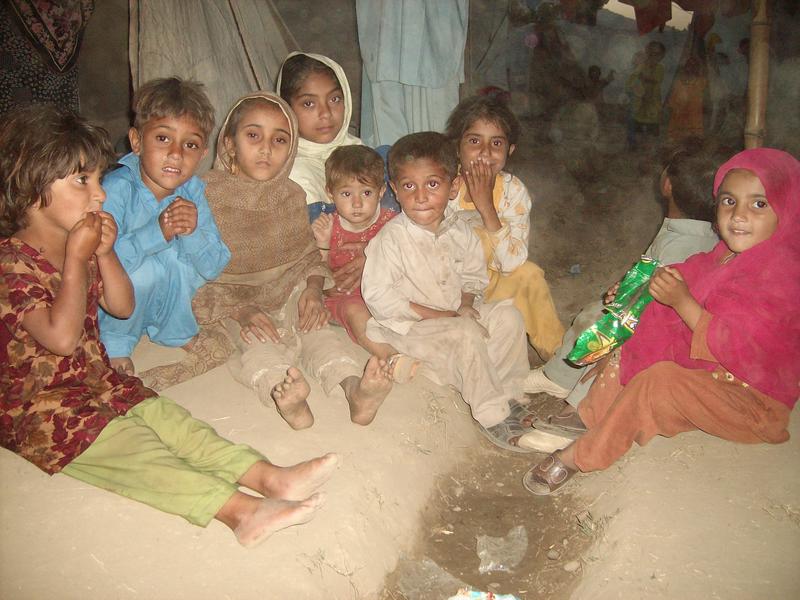 The Rangmala camp comprises of 516 families in which the number of IDPs is 3484 and it is expected that the number will increase to more than 10,000. Among the present 3484 there are 779 men, 937 women, 935 boys, and 883 girls in the camp. The majority of the people in the camp were hard working and poor people. They are in a very miserable condition. The people are facing big problems because of the hot weather, dust, disease, lack of proper sanitation and the bad response of the authorities. There are no arrangements for rehabilitation, education, food and medical facilities for the people. The newborn babies and their mothers lack food and proper care.

The already very active volunteers on the committee made their best contribution in the rehabilitation of the people. They have carried out a great number of jobs and are helping those affected by the war with whatever resources they have at hand. A large number of IDPs are also living in various houses of the comrades in the village of Dheri Jolagram.