Details
In Defence of Marxism
31 October 2006

Mexico
Share
Tweet
Police in London brutally break up a protest picket outside the Mexican embassy. The picket had been called to protest at the army clampdown in Oaxaca over the weekend. 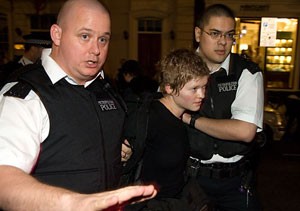 Around 50 people picketed the Mexican Embassy in London yesterday, October 30, in protest at the Mexican government's decision to send in 20,000 soldiers and police to retake control of the city of Oaxaca.

The city had been under the control of the APPO, the Popular Assembly of the Peoples of Oaxaca, for the last five months, ever since Ulises Ruiz, governor of Oaxaca, had sent the police into the city's Zocalo Square, to evict the teachers who had set up a tent site in the square while on strike. The police attack was repelled by the teachers and what had started as a wage dispute then became a movement with insurrectionary characteristics.

The police have killed at least 8 people during the last 48 hours in their attempt to regain control of the city. Dozens of people have been arrested in the operation and some are reported as disappeared. On Sunday, a 100,000 strong rally called by APPO marched from the site of Canal 9, in the University area, towards the Zocalo Square, which had been taken over by the army and the police and was heavily guarded. At the end of the march the police arrested at least 28 people, who were then taken to the 28th Military District. 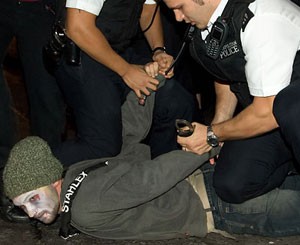 In London a force of up to 100 police officers brutally removed a group of drummers present at the Embassy picket. The drummers, who had come to make some noise and attract people's attention to the developments in Oaxaca, had unwisely fallen into police provocations when a police officer stood in the middle of some images which were being projected onto the embassy building, thus giving them an excuse to escalate the police presence from no more than four officers at the beginning of the protest to more than 100 when the arrests took place and ultimately break up the protest with brutal arrests and acts of intimidation.