Supporters of Socialist Appeal in Glasgow joined Greek students in a picket of the Greek Consulate to mark the one year anniversary of the police murder of Alexandros Grigoropoulos in Athens. The murder set off a revolt of working class youth throughout Greece that was met with huge police repression. The picket was held also to show solidarity with the massive demonstrations that took place throughout Greek cities last Sunday to mark the anniversary. 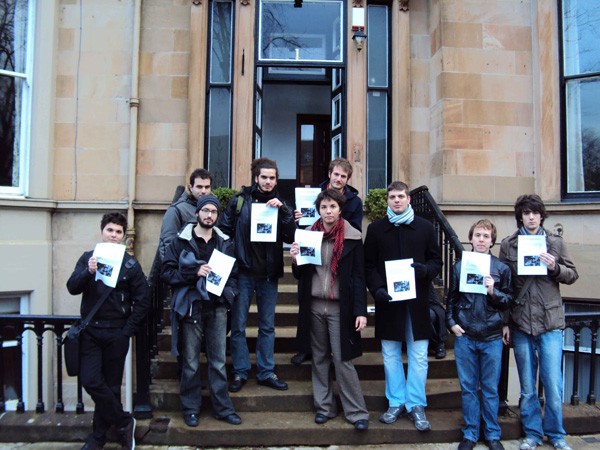 The picketers posted a statement to the consulate expressing solidarity with the protesters and calling for an end to police violence. The statement also highlighted that the protests were a response by Greek youth to a poor education and welfare system. Even though this was a small protest it is very important to express solidarity with the movement in Greece which is struggling against the same system as workers and youth in Britain.

Greek students produced a leaflet for the demo as follows:

A year ago the fatal shooting of a 15-year old boy, Alexandros Grigoropoulos, by a policeman in Athens sparked the most massive riots for decades. The majority of the protesters were students, teenagers and a small number of workers who demonstrated against police violence and for the insufficiency of educational and welfare system, that the governments were unable to solve the last 25 years. If we could keep something from last December this is the end of silence. This is the reason that the government is afraid of the youth protesters who fight for their rights. To describe briefly the situation in Greece the last two days there have been 72 arrests by the police. The arbitrary of the authority continues but the fight never ends!

Solidarity to the Greek protesters!