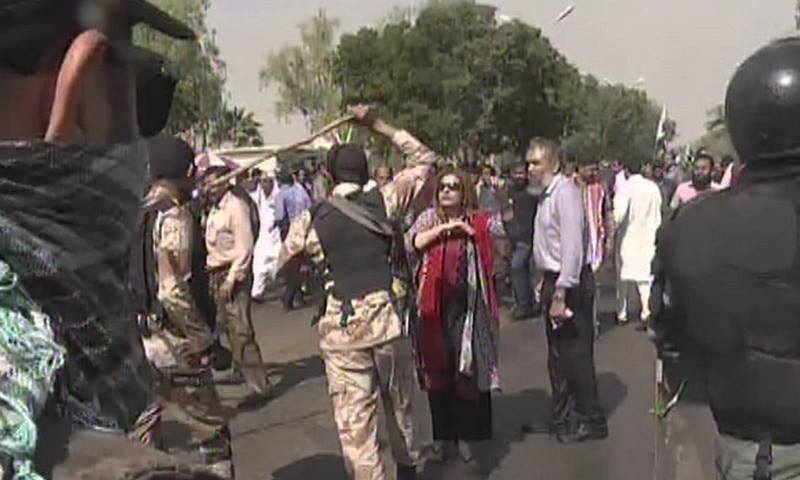 In the morning the Pakistan International Airlines (PIA) labour unions defied a government ban on union activity, and observed their planned strike against the privatisation of the national flag carrier. Unlike previous showdowns, the government tried to use a weak legal excuse as a weapon. They invoked the Essential Services (Maintenance) Act 1952 against the PIA for six months, outlawing  union activity across the country inside and outside major airports.

The management and the regime continued the flights activity with pilots hired from private airlines and leased from the Pakistan Navy. Heavy contingents of riot police and paramilitary Rangers were deployed outside Jinnah International Airport. But when the workers at Karachi’s old airport tried to move towards the main terminal tarmac, to stop flights from operating, the brutal state forces resorted to severe violence. Initially they used water cannon, tear gas, rubber bullets and batons to disperse the protesters. 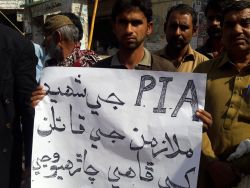 Failing to stop the marching workers, they resorted to live ammunition. “They killed a man. They killed him,” cries went up as the crackles of gunshot briefly subdued the noise of the protesters. Three protesting workers were killed and more than a dozen injured, including some TV reporters. This was from the direct fire of the rangers and police according to the main leader of the JAC, PIA’s senior pilot Sohail Baloch, who has been leading the protests and was able to escape detention.

"We can accept baton charge, use of water cannon and even teargas shelling, bt how can we accept straight firing on our workers?" #PIAStrike

Later Baloch met journalists at a discreet location. “Paramilitary troops wearing masks fired straight at the protesters… we did give a call to suspend flight operations but we did not ground any flights forcibly.” Immediately after this heinous atrocity air traffic across the country came to a near standstill after about 4pm in the afternoon. The paramilitary force also whisked away three PIA union leaders, including former CBA president Hidayat Ullah Khan and Society of Aircraft Engineers President Zakir Farooq. They were both released later.

Later in the evening events not seen for years unravelled rapidly. The PIA Chairman, Nasser Jaffer, resigned from his post, taking full responsibility for the brute use of force against the protesters in Karachi.

Sensing the predicament of air travellers, the Civil Aviation Authority has requested a private airline company, Air Blue, to commence special flights from Lahore, Karachi and Islamabad. That has failed to materialise. After all, the Air Blue workers were also indignant at the brutality of the state. As the news spread, the Pakistan Airlines Pilots Association (Palpa) told its members not to proceed to any airport in the country. More than 35 domestic and international flights had been cancelled by the evening. Pilots, cabin crew and flight dispatchers, who had earlier reported to work, started walking away. Officials feared the Engineering Department, which besides aircraft overhauls is responsible for checking planes before every flight, could technically bring the airline to its knees.

Initially the regime responded forcefully. Prime Minister Nawaz Sharif was trying to strike a bold posture: “It will not happen at all... the protesting employees would face action, and terminated from service and a year in prison under the Essential Services act. Any concession to such elements would be unfair to the country… the PIA employees who were not part of the protest campaign would be rewarded.”

All regimes pursuing neoliberal capitalist policies in the last four decades have tried to privatise or exploit the national carrier for their own particular political and economic interests. They are responsible for the sorry state of this institution. The PIA suffers from incompetence, inefficiency, wasteful expenditure, pilferages, declining service standards, nepotism, and gross mismanagement. The result is the accumulation of losses in excess of Rs300bn and yearly losses of between Rs20 and Rs30bn, which the government has to pay to keep maintain the airline.

As always, the media, elite politicians and intelligentsia point their fingers at the workers rather than the present management and long history of political interference. The reality is that the PIA workers are perhaps the lowest paid compared to airline industry workers internationally. There have been huge kickbacks for the top management officials, government ministers and bosses in plane purchases, awarding routes and other agreements with airline-related businesses.

When the incumbent right wing PML-N government came to power in May 2013, it had to go to the International Monetary Fund (IMF) with a begging bowl. The $6.7-billion IMF loan programme came with very hard and stringent conditions, including the sale of 26 percent of PIA shares.

When the government unilaterally and without consulting parliament, put forward Presidential Ordinance no. XVII late on the evening of December 4th, 2015, there was outrage in the parliament. “The Pakistan International Airlines Corporation (Conversion) Ordinance, 2015” was meant for “setting up of the Pakistan International Airlines Corporation into a public limited company”.That is, it was a privatisation of PIA.

The Nawaz government was very quickly pushed onto the back foot and forced to withdraw the ordinance and instead introduce a bill which was to be discussed in parliament. This happened after a resolution was hastily passed in the parliament where even the most chronic absentees were whipped into raising their hands. Making the measure a subject of debate in parliament however, led to a debate which became the precursor of the present strike. There was even uproar from the bourgeois opposition parties to this drastic act that could provoke the working class. The present regime is the classical representative of the Pakistan bourgeois and is carrying out its aggressive anti-workers policies in a period of relative lull.

The problem is however, that the PIA needs a massive injection of capital to keep the company going. There are very few capitalists who would be willing to gamble their wealth on such a project. They will hardly find any buyers of this huge and consciously damaged and depreciated institution as a whole. Successive regimes have attempted to sell it to their cronies at throwaway prices.

The Nawaz regime’s experts and their imperialist masters will try to break the corporation into various departments, then sell them as butchers do with various portions of mutton. The workforce has already been chopped from 19,000 to 14,000. After its privatisation the workers will be the first victims, starting with redundancies. This will very quickly move to attacks on wages, health and benefits.

The protracted privatisation process of PIA has faced several resistance struggles by the workers in the last decade and a half. But this strike has so far outshone the previous struggles. It has received the attention of society and the working class in particular. The ferocity and the sacrifices of the struggle has forced the media to give it coverage. Although the corporate bosses, news editors and their anchors have tried to cover other non-issues. However, so intense is the mass interest in this strike, that their ratings crashed when they tried to divert attention from this militant struggle of the PIA workers.

This in itself proves that when workers arisen and move forward in a courageous struggle, the media that is prompted to be the demigod of politics and the public oppinion, fails miserably to undermine the interest and enthusiasm of the workers and youth in society.

This strike started about six weeks ago, initially after a relatively low-key protest by the workers. Soon the pent-up hatred and revulsion towards privatisation, and the renewed instincts and charged energy to fight for the protection of their jobs and basic rights, started to become more and more pronounced. The Joint Action Committee, formed from representatives of the different unions of PIA, linked to all sorts of political parties from the Islamist fundamentalists to the PPP, were united by the pressure of the rising working-class tide of struggle from below. The demand on which this struggle was launched was based on the following PIA employees' four-point agenda:

There were many obstacles and weaknesses faced by the PIA workers in struggle, ranging from the lack of one united union to the isolation of this struggle from workers of the private and unorganised industrial sectors. More importantly, the isolation from the workers in state enterprises like the WAPDA and the railways, who are themselves threatened with similar privatisations and redundancies. 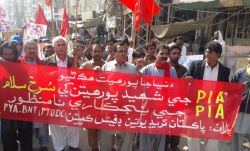 Such obstacles were smashed once the workers entered the arena of militant struggle with a renewed courage and determination. Hence it is vital that this isolation and a unity and solidarity with the workers of other industries and institutions be built rapidly. On Wednesday morning there were already meetings taking place, particularly in Karachi, of the leaders of different trade union federations ranging from electricity to railways workers, from the postal to the telecommunication unions.

The strike is another spark that shines a light on the class struggle seething below the surface of a society where the working class, and the mass movement as a whole, is faced by a difficult objective situation and a relative inertia of the class struggle. This requires a much wider and bolder approach by the genuine leaders of the workers’ leaders. It is an historical obligation of the leaders and trade union activists to support the PIA strike. A united front has to be created to force the rulers into retreat. But concrete action is needed to win this and other struggles against privatisation and capitalist aggression perpetrated by the ruling classes and the present capitalist regime.

A call for a complete general strike is a given by such a united front of all the trade unions and progressive political forces. For a victorious general strike, the workers and youth of all industries, sectors of the poor students in the educational institutions and poor peasants in the countryside have to be mobilised. Enterprises under public control not only should be defended, but workers must demand that these should be placed under democratic control of the workers.

Several opposition political parties’ leaders are visiting the offices and camps of the striking workers of PIA. All solidarity is welcome, but any intrigue or manoeuvre by political manipulators to make any rotten compromise should be forcefully rejected and quashed.

An extraordinary sympathy prevails among the workers throughout the country. This situation may not last long. A successful general strike could not only bring the regime to its knees, but the other workers struggles will be boosted and receive courage by this victory of the PIA workers to move forward and defeat privatisation and other attacks of the bourgeois, imperialism and the brutal capitalist state.

However, even if the PIA workers’ demands are accepted, at present rotten Pakistani capitalism has no basis and capacity to sustain any concessions or reforms for the workers. Hence in the last analysis these attacks can only be decisively defeated, the woes of the workers and the agonising existence of the oppressed masses can only ve put an end to, by linking this struggle to the transformation of the socioeconomic system through a socialist revolution. Such an historic victory of the proletariat in Pakistan will usher in an era of struggles and revolutions yet unforeseen on the South Asian subcontinent.