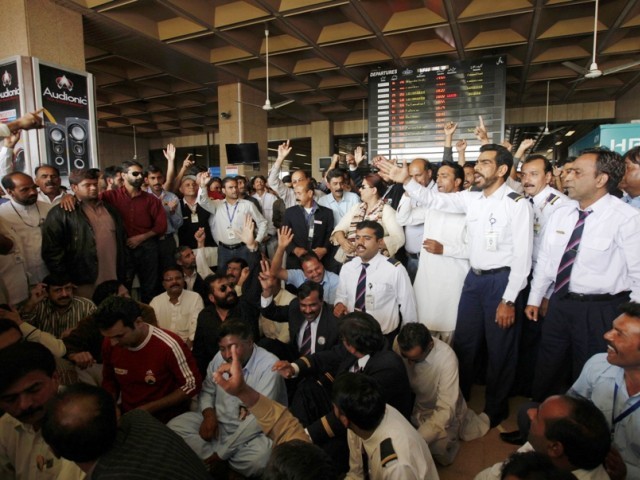 Within months of coming to power the right-wing government of the Muslim League announced their intentions of privatizing the state owned enterprises. On 13th September it was announced that 26% of the shares of Pakistan International Airline’s would be privatized along with the control of the management of the company. Pakistan Post, Railways, WAPDA (Water and Power Development Authority) and many others are also on the list for privatisation.

Pakistan International Airlines (PIA) is the state owned airline operating flights to 24 domestic destinations and 39 international destinations in 25 countries across Asia, Europe and North America. Established in 1946 as Orient Airways it employs 20,000 workers and plays a key role in the Pakistan’s economy and infrastructure. Once a profitable organization, PIA has been losing money for some years now owing to the corruption of its top management, most of which only have the merit of being friends of those in the government.

PIA was once one of the best airlines in the world. A number of foreign carriers had their staff trained by PIA. Until the 70s it was a very profitable institution and a source of income for the government. The gradual decline started in the 80s and corruption is attributed to be the main cause of that. This coincides with the advent of huge sums of black money in Pakistan’s economy.

The ever-increasing deficit of national airlines has now swelled beyond Rs 180 billion. On 14 March the National Assembly was told that PIA had acute shortage of aircraft and out of total 38 planes, only 24 were being operated on various routes. In February 2012 Transparency International reported that PIA signed an agreement to purchase five 777 Boeing aeroplanes for $1.5 billion. In that deal $500 million were given to the PIA management as kickbacks for purchasing the aircrafts for 50% more than the market price. These and many other examples clearly show that prime beneficiaries and perpetrators of major corruption are the top bosses, not the ordinary workers. If properly managed, the financial gap could be closed just by the profits of PIA owned hotels in the heart of New York and Paris.

One example of this loot and plunder is the current practice of a Federal Minister, Shahid Khaqan Abbasi, who is also the owner of a private Air Line called Blue Air. His airline is now starting operations from Birmingham (Britain) to Pakistan from 28 September. But before that he is withdrawing all PIA management staff from Britain, in order to create a vacuum of management which will continue for many months. This will help his private airline to get market share of PIA. Similar policies have been carried out over many years to bring down this national asset. But the workers are quite determined to fight against these vicious attacks.

Addressing a public meeting in Lahore, Secretary General of Peoples Unity, Hussain Abbas, the official representative union of PIA workers said that if workers are given democratic control of PIA “we will turn it into profitable institution within few months”. He said that five new planes have been grounded due to minor problems, but that management is not allowing for them to be repaired, which means that the company is being drained of funds. The President of Peoples Unity in Lahore, Sajid Gujjar, also exposed the vested interests of the present government who is led by Nawaz Sharif, who himself owns many industries. He said that they are only looking to loot and plunder this public asset in order to do favours for their cronies. He said that PIA owns luxurious hotels in Manhattan New York and on Champs Elysees in Paris. The Roosevelt hotel (http://www.theroosevelthotel.com/) in Manhattan has 1,015 rooms and has rents up to $2600 per night. If only these hotels are managed properly all the losses of PIA could be made up for. But these rulers want to bankrupt these hotels in order to buy them cheap.

The Chairman of PTCL (Pakistan Telecommunication) workers union, Sabir Butt, said that if workers stay united no force on earth can privatize PIA. He explained the experience of privatization of PTCL in 2005, when some leaders sold out to the government. He said Privatization of state institutions has not yielded anything in the past. PTCL used to be one of the most profitable telecom companies in Asia. It had 72 thousand employees and the profit earned in the last year before privatisation was Rs. 30 billion. Now PTCL has 18 thousand workers and the profit has dropped to just Rs. 8 billion per year along with a steep drop in the quality of the services.

Privatisation of Karachi Electric Supply Corporation has also resulted in disaster for the consumers and the workers. Muslim Commercial Bank and Habib Bank Limited were privatised with the infamous legislation of 27/B barring any union in financial institutions. The privatisation of PIA would result in massive layoffs that would lead to more unemployment, poverty and misery. Fares would also increase and a number of domestic routes to remote areas would be closed down.

Addressing the public meeting of PIA workers comrade Adam Pal of PTUDC said that Bourgeois financial analysts and the media are prescribing privatization as the solution of all the problems in PIA. The newly elected government of Pakistan secured a loan of $6.68 billion from IMF few weeks ago. Most of this money will be used to pay back the interest on other existing loans, which have already been repaid many times over. But the loan comes with strict conditions of vicious attacks on the working class. This gives the government the excuse of implementing the directives of the IMF, privatization being on the top of the list. Through corporate media, Privatization is being portrayed as a magic pill which, will transform Pakistan into a prosperous economy. But this is all a big lie for workers and people of Pakistan. Comrade Adam Pal also warned against the option of selling 26% shares to workers of PIA. He said this is a ploy of some “sympathizers” which will end in a sabotage of whole struggle. We should call for total control of PIA under democratic control of workers and end of policy of Privatization. He promised the workers to bring them solidarity from workers of other industries and public institutions and workers from other countries of the world. This was enthusiastically appreciated by all.

After the financial meltdown of 2008 and the following crisis of global capitalism the workers in the advanced capitalist countries are being subjected to brutal austerity and unemployment resulting in the contraction of European and American markets. The growth rates of the so called emerging economies have also slowed down drastically. In these conditions it would not be easy for the rulers to find good buyers of state owned institutions. Who would want to invest in Pakistan which is facing a terrible security situation compounded with political instability? Therefore there are no investors in the market who would buy PIA, Pakistan Steel and Pakistan Railways as a whole. The situation is somewhat similar to that in Britain during 80s, when Margret Thatcher sold off British Telecom for just one pound. Since the pathetic bourgeois rulers cannot do anything like that, they have decided to go for fragmented privatization of the state owned institutions. PIA and other state institutions will be sold at throwaway prices to the cronies of those in power. Pakistan International Airlines has decided to close down the flights and offices in US, Australia and some European countries due to shortage of planes and a persistently growing deficit. Such steps are being taken to further justify the privatisation.

The first major Privatization in Pakistan was that of Muslim Commercial Bank during the first government of Benazir Bhutto. The last PPP government tried its best but could not carry out any major privatisation. They reverted to the sinister scheme of Public Private Partnership (PPP) by offering 12% shares to the workers. In 2011 the PPP government tried to sell off PIA but the workers waged a marvellous struggle and won. (http://www.marxist.com/pakistan-strike-at-pakistan-international-airlines.htm).

Ferment is building up in the ranks of the workers in PIA. Protests are already underway. The workers are preparing for a fight back. They have already defeated one attempt to privatise the airline and they have learned important lessons in that struggle. But it is not only the workers of PIA that are at stake. Other institutions are in the queue as well. This fight has to be a joint struggle of all the workers, particularly those from Railways, WAPDA, Post and other state owned enterprises. The only way out is to make all fronts a battlefield in this class war.

We appeal to workers of the world to express solidarity with this struggle and send solidarity letters from their unions.

Workers control and ownership of all state and private enterprises!