Paraguay
Share
Tweet
After the recent elections, Fernando Lugo, of the Patriotic Alliance for Change will become the President of Paraguay. He leads a contradictory coalition, but he is clearly the expression of the deep-seated desire of the masses for serious social change.

Sunday 20th April - The Paraguayan electorate have relieved their country from the party which brought them 35 years of General Alfredo Stroessner, the Colorado Party's Military Dictator. His rule ended in 1989 with 43% of the 6.5 million population living in poverty. On the 15th of August this year, the leftist Patriotic Alliance for Change candidate Fernando Lugo will be sworn in to his position as President for the next five years.

Officials in the Paraguayan capital Asuncion announced that polling stations closed at 4pm on Sunday with the results standing at 40.7% for the Patriotic Alliance for Change, 30.7% for Blanca Ovelar of the Colorado Party, 22% for former Army chief Lino Oviedo's right-wing National Ethical Citizen's Union Party, and minority parties awaiting their results.

A self-confessed "Bishop of the Poor," Fernando Armindo Lugo Méndez is a former Roman Catholic priest of 30 years. He will be sworn in as President 31 years to the day of his ordination, which he had to renounce on January 11th 2005 before he could, in his own words, collaborate in "the search for solutions to the country's problems."

He is the nephew of Epifanio Méndez Fleitas - the leading opponent of Stroessner's dictatorship which forced Lugo's three brothers into exile. From 1977 until 1982 he was a Missionary in Ecuador during which time he worked with the indigenous communities where it is said Ecuador's President Rafael Correa maintained close contacts with the church's progressive-inclined "Theology of Liberation" tendency.

As his tag "Bishop of the Poor" suggests Lugo's intentions are to create a new government for the people. Regarding the US, he has expressed the desire to have good relations with Washington, although he is opposed to the authorisation of military presence that his predecessor had allowed. In May of 2006, urged on by Former President and staunch American ally Nicanor Duarte Frutos, the Paraguayan Congress authorised immunity for US troops to operate joint military exercises in the country. The official excuse given for US military presence is that the area where Paraguay borders Argentina and Brazil (otherwise known as the Triple Frontier Area) is supposed to be a centre for Islamic terrorist activities. However it is clear that the US wants to reinforce its direct military presence in this region of the world shaken by revolutionary movements. Their need to have military bases in the region has increased after Ecuador's president Correa announced that his country would not renew the concession for the US military base in Manta. Furthermore, the proposed location for this base would put US soldiers close to a country in revolutionary turmoil: Bolivia.

Duarte, though not going to the effort to block it, did make the effort to smear Lugo's Presidential Candidacy by calling into question the legality of his political pursuits. Article 235 of the Paraguayan Constitution forbids ministers of any religious denomination to hold elective office. However this was not fully in Lugo's own control; he had requested to Pope Benedict XVI that he be defrocked in order to run for office, but this request was denied him and instead he was suspended. The Vatican has said that it did not want to accept his request because priesthood "is a lifetime commitment that goes beyond human determination to end it."

Other sources note that the suspension could be based upon Lugo's embrace of Liberation Theology which is frowned upon by the Vatican for its "Marxist influences," and his support of invasions of large landholdings by landless families. It was clear that neither the Paraguayan ruling class nor the Vatican were happy with Lugo and, like in the case of Lopez Obrador in Mexico, wanted to stop him before he could run.

Although some of his policies will be a much needed step in the progressive direction - such as agricultural reforms and reassertion of national sovereignty over energy utilities,‑ Lugo has been keen to play down the image that he is part of the popular left characterised by Hugo Chavez and Bolivia's Evo Morales, although so far his reasoning has been far from substantial.

He dismissed Chavez's Government for its "lack of pluralism," but fails to see the dangers inherent in his own coalition which is shared amongst Socialists, Christian Democrats, and certain sections of the centre-right. This is bound to lead to conflicts between the interests of the masses of poor peasants and workers who voted for Lugo expecting fundamental change and those political parties of the ruling class which joined Lugo's Patriotic Alliance for Change (APC) in the hope of getting a share of power. These sections are represented by Lugo's vicepresidential candidate Federico Franco, from the Partido Liberal Radical Auténtico. He sought to reassure big business by distancing himself from a "Chavez-style government" and adding that, "Our government will bring the country into a globalised world, into the World market".

The contradictions between left and right within Lugo's coalition could already be seen during the campaign. While peasant organizations declared themselves in a state of emergency and vowed to fight against any attempt to steal election victory from Lugo, the centre and centre-right parties within the APC even refused to participate in the 15,000 strong rally that Lugo organized in the capital Asunción last year before the election campaign began.

Lugo knows that there are contradictions. During the campaign he declared that: "I am the result of the clamour for change of the people, and now I have the support of a coalition of parties and organisations. But it is the rank and file that supports me, the people, who want change in Paraguay, not an agreement between elites". 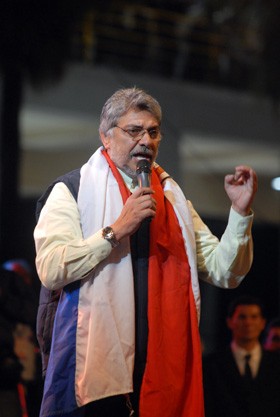 Lugo himself also displayed some of the contradictions inherent to reformist and Social-Democratic movements when explaining his desire to adopt the style of Chile's President Michelle Bachelet - "[Bachelet's] Government has not ceased to be Socialist just because it signed a free trade agreement with the United States." This statement should be found unpalatable by those who want to see a real Socialist economy throughout Latin America. The signing of a Free Trade Agreement with the US would only worsen a situation where, in Lugo's own words, "the small group of 500 families who live with a first-world standard of living while the great majority live in a poverty that borders on misery".

Since Paraguay is the fourth largest exporter of soybean in the world and the subject of a renegotiation deal with Brazil and Argentina over two hydro-electric projects, it is necessary to adopt a real Socialist economy to secure what is best for the country and its people, and not remain at the servitude of the conglomerates. It was part of Lugo's campaign promise to engage in talks with the Paraguayan-Brazilian company Itaipú, to rearrange a treaty which was signed in secret by the company and the military dictatorship in 1973. Paraguay uses only a small portion of the energy it produces, and since sales to third party countries is prohibited, it must demit its remaining product back to the Brazilian state electricity corporation, Eletrobrás. Paraguay pays the corporation for this transaction and the corporation compensates Paraguay a far smaller sum than it makes from the resale of the energy. The Brazilian capitalists have only been able to get away with this through scandalous deals with corrupt Paraguayan elites, but Lugo has threatened them both with amendments. As things are the treaty is scheduled to expire in 2023.

On the question of backgrounds in further response to his feelings towards Chavez, Lugo has stated that "Chavez is a military man and I have a religious background," which spurred on former mayor of Asuncion Rafael Filizzola to state "we cannot classify him [Lugo] by normal political means because his whole background is not in politics but in the church." Despite the fact that 90% of the Paraguayan population are Catholic, it is a must that (Socialist) politics inform a leader of the necessary changes which need to be implemented, not religion outright. It must be an imperative to avoid religiously informed policies such as the blanket ban on abortion which was the measure taken by Nicaraguan leader Daniel Ortega. Currently it is prohibited to perform abortions in Paraguay unless the mother's life is in danger.

Regardless of his statements or intentions, the election of Lugo represents even if in a distorted way, the deep-seated will for change amongst the Paraguayan workers and poor peasants. In the last few years there have been a number of mass movements of workers and peasants, including a general strike and blockade of the parliament which forced MPs to reverse all privatisation plans, in 2002. Lugo's promises of land reform (in a country where 70% of agricultural land is in the hands of 1.7% of landowners), jobs for all, and the use of the country's resources (hydro-power, oil and others) in the benefit of the majority, if maintained, can only bring him into conflict with the ruling class and the parties in his own coalition. But in order to attain this strong elements of empty reformism and nonsense conservatism must be rooted out, otherwise all the excitement may amount to nothing. If on the other hand he chooses to conciliate or even betray those who have deposited so many hopes in him, then the movement of the masses will find another expression. Lugo will be judged by his actions. Meanwhile the workers and peasants must be ready to fight for the demands in the streets, as these will not be conceded by the ruling class without a struggle.

The situation in Latin America is one of increased class battles. Conditions are ripe for a bold challenge of the capitalist system and the building of a Socialist economic structure.