Details
In Defence of Marxism
17 October 2006

Brazil
Share
Tweet
A Panamerican Gathering in Defence of Rights, Land Reform and Industries has been called in Joinville, SC, Brazil, for December 8-10. The meeting is being called mainly by the movement of occupied factories and is the continuation of the First Latin American Gathering of Occupied Factories which took place in Caracas in November 2005.

A Panamerican Gathering in Defence of Rights, Land Reform and Industries has been called in Joinville, SC, Brazil, for December 8-10.

The meeting is being called mainly by the movement of occupied factories and is the continuation of the First Latin American Gathering of Occupied Factories which took place in Caracas in November 2005.

This meeting marks a qualitative change in the movement of occupied factories throughout the American continent and takes a further step forward in the coordination and integration of the movement on an international scale.

The organisations calling for this meeting are the Council of Occupied Factories of Brazil, the National Movement of Occupied Factories (MNER) of Argentina, the Venezuelan Revolutionary Front of Workers of Factories Occupied or under Workers' Co-management (FRETECO), the Brazilian Landless Peasants Movement (MST), the Human Rights Center (CDH) of Joinville-Brazil and the National Workers Command (PIT-CNT), which is the main trade union confederation in Uruguay.

Alan Woods, editor of In Defence of Marxism, will also be present at the meeting.

Below we reproduce the official leaflet advertising the meeting, also available in Spanish, French, German, and Portuguese.

The Coordinating Council of Occupied Factories, the Landless Rural Workers Movement (MST), and the Human Rights Centre Joinville (CDH) of Brazil along with the National Movement of Recovered Factories (MNER) of Argentina, the Revolutionary Front of Co-managed and Occupied Factories (FRETECO) of Venezuela and the PIT-CNT of Uruguay are pleased to invite the workers of recovered factories, agricultural and urban workers, parliamentarians, the social movements and the youth from across the Americas to fight in defense of the interests of the working class and the sovereignty of the people against imperialism. We invite all to attend the Pan-American Gathering in Defense of Jobs, Rights, Agrarian Reform, and Manufacturing Industry in Joinville, Santa Catarina, Brazil, on December 8-10, 2006.

Because the capitalists, their governments, the multinationals and finance capital desire to submit us to super-exploitation, the workers of all countries, in defense of their dearest interests, have resisted the closure of factories, the loss of jobs, and attacks on our rights.

There are hundreds of factories in Argentina that have been recovered by workers who are faced with a crisis created by the capitalists and their government. In Uruguay, a strong movement of factory recoveries and occupations has developed with the help of the PIT-CNT. In Bolivia it was the miners in defense of their jobs and who fought against the privatization and closure of the mines that put the Bolivian revolution and the nationalization of gas and petroleum on the order of the day. In Brazil the workers have occupied factories and launched a fight for the nationalization of industry in order to save thousands of jobs. In Venezuela the workers occupied factories in the fight against the economic sabotage of the ruling class. With the help of the UNT a movement was launched that took up the call of the Chavez government for nationalizations. In the United States the closing of hundreds of large factories and the loss of thousands of jobs has forced trade unionists to face the question of the occupation and nationalization of these companies.

For these reasons we have organized various national and international meetings of workers in struggle. For these reasons we wish to explain and unite our struggles and unite the oppressed against humanity's common enemy - capital and its wars, pillage and ransacking of the wealth we produce. In Caracas in 2005 we affirmed:

"They close, we open the factories. They rob the land and we occupy it. They make wars and destroy nations, we defend the peace and the sovereign integrity of the people. They divide and we unite. Because we are the working class. Because we are the present and the future of humanity".

(Declaration at the 1st Latin American Meeting of Companies Recovered by the Workers, Caracas, 29/10/05).

"Each factory that is closed is a cemetery of jobs as also are the estates in the country. For this the workers of the field and the city have the right to occupy the factories and the lands to defend their work and the sovereignty of our people. For this we occupy the companies and make them produce"

(Declaration at the 1st Latin American Meeting of Companies Recovered by the Workers, Caracas, 29/10/05). 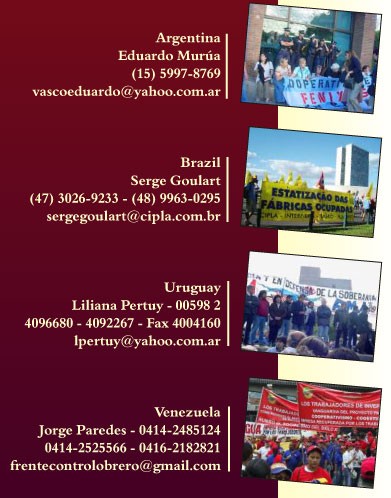 We know that there are no human rights without work or under the tyranny of capital. Without agrarian reform there will be no work in the countryside, only an increase of misery in the cities and the fields. The workers cannot accept that the social movements and the defenders of human rights continue to be treated as criminals and continue to be the object of judicial measures undertaken on the basis of accusations reserved for the most infamous of criminals.

Only our organization and our struggle can save jobs in a sustainable manner and achieve the demands of the people. Only the free and democratic discussion between workers, coordinated internationally, can guarantee that our struggle and our organization will be solid enough to defend the interests of the working class.

The exchange of experiences in the Pan-American Gathering in Defense of Jobs, Rights, Agrarian Reform, and of Manufacturing Industry, will allow us to arrive at conclusions and plan common actions which will put our struggle on a higher level in each country.

Only through the fight to defend each job and every gain will we find a way out of the present situation. To those that dare to tell us that there is no way out, that there is no way to confront the forces of capital, we respond with our determination to fight in unity in the defense of all that is socially progressive in what humanity has constructed.

We invite all to organize their delegations and preparatory activities on a national level. We will meet at the Pan-American Gathering in Defense of Jobs, Rights, Agrarian Reform, and of Manufacturing Industry at the Cipla buildings in Brazil on December 8-10, 2006 in order to resist, explain and advance our common struggle.