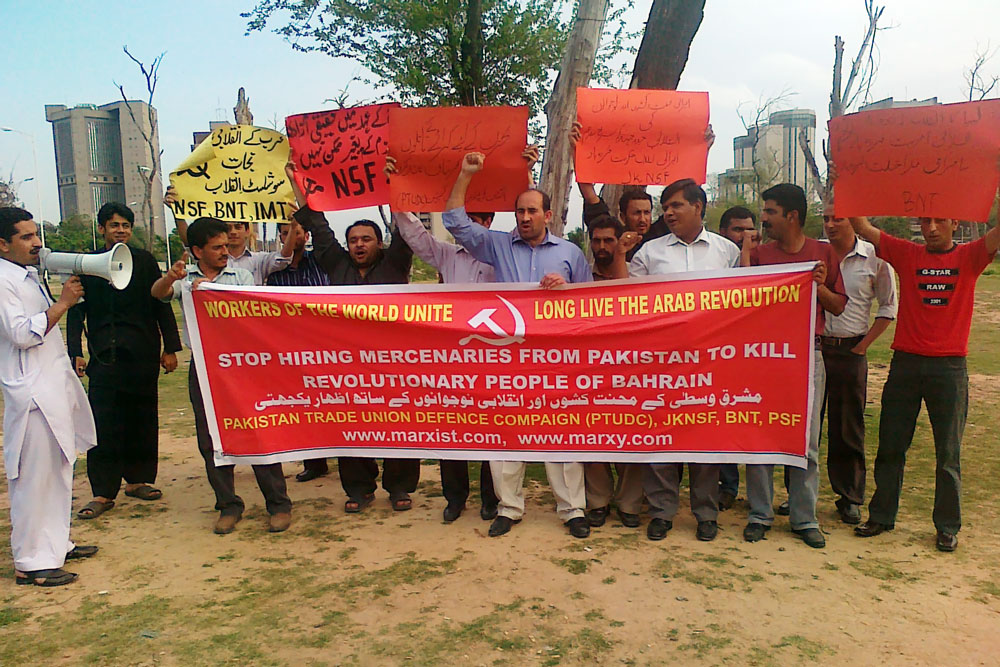 On March 26 activists of the PTUDC, YFIS, BNT and JKNSF gathered in front of the Islamabad Press Club to protest against the hiring of mercenaries by the Pakistan Army to be used to repress protests in Bahrain and other countries.

After the rise of the revolutionary movement in Bahrain, the brutal government has stepped up hiring for its army and police from Pakistan. Under the banner of the Fauji Foundation and the Bahria Foundation of the Pakistan Army, this recruitment is going on in all the major cities of Pakistan.

Unemployed youth with ten years of study, aged between 20 and 25 years and between 5 feet 10 inches to 6 feet [1.78 and 1.83 metres] are being hired in big numbers and offered hefty wages. Already there are big numbers of Pakistanis working with the Bahraini police who are being used by the regime to crush the revolutionary movement.

The brutal Khalifa regime is also trying to sabotage the movement by directing it into sectarian lines in an attempt to divide Shias from Sunnis. But the revolutionary people of Bahrain have rejected these manoeuvres and are fighting on a class basis. Many trade unionists and workers in the Aluminum and other industries belonging to the Sunni sect have come forward against the regime and have participated in the revolutionary movement. Old leftist currents are also being reorganized on various platforms.

Now the regime is trying to use the immigrant population from Pakistan and other countries as a pawn in their divide and rule policy. Many are being recruited into the Police to torture the arrested people and to crush the protests. Some of these policemen have been killed while trying to crush the protests. These incidents are being used here by the Pakistani State to gain sympathy for the brutal regime of Bahrain

Cyril Almeida wrote in The Dawn of March 24:

“The harrowing attacks on Pakistani nationals in Bahrain, including the murder of at least one policeman, has perhaps for the first time drawn attention to the for-hire security personnel who travel from Pakistan to defend the Bahraini kingdom and its ruling class.

“The role Pakistani nationals play in the Bahraini security apparatus was further underlined on Sunday as reports emerged that as many as 1,000 men are being recruited by the army-run Fauji and Bahria foundations for the Bahrain National Guard.

“But the attention garnered domestically by the role of Pakistani nationals in Bahrain — there are as many as 65,000, with thousands employed in the security services, according to a Foreign Office official — has contrasted with the wall of silence that has met the weeks of protests in Bahrain.”

The Bahraini regime has also the complete support of the Saudi and US governments and the Pakistani State is once again playing the role of stooge to its imperialist masters. There are big advertisements in newspapers everyday for recruitment to the security forces of Bahrain. The movement in Bahrain is also spilling over into Saudi Arabia and protests are being held in many cities of Saudi Arabia. The Pakistani State and its ruling class has always served the Saudi regime and once again they will offer their services to help crush this movement.

This protest was called against the recruitment campaign to hire mercenaries for Bahrain or any other country in the coming days. Protestors condemned the slavish attitude of the Pakistani state and condemned the brutal regimes of Bahrain, Saudi Arabia, the UAE and also US imperialism. They demanded that all foreign armies should be immediately withdrawn from Bahrain. They also supported the revolutionary people of Arab World.

Demonstrators said that if this recruitment is not stopped more protests will be held in other cities on a much bigger scale. The PTUDC and BNT have also started a signature campaign in solidarity with the Arab Revolution and against the role of the Pakistani State. They vow to collect thousands of signatures from Trade Unions, Students Unions, unemployed youth, lawyers and other activists for this agenda and send them to the people of Bahrain and other countries to express solidarity from the working class of Pakistan.

Please see the image below which appeared in the Daily Jang for recruitment in Bahrain.