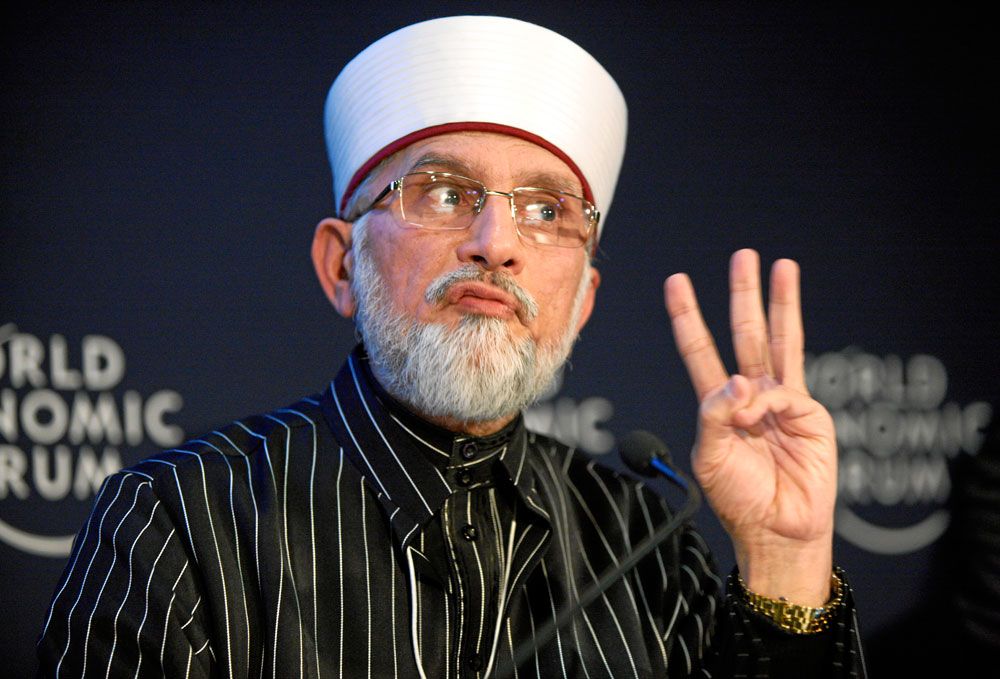 Islamabad has been witnessing “anti-corruption” protests led by Tahir ul Qadri recently returned from his long residence in Canada. He leads a reactionary movement that is actually being fomented by a section of the Pakistani ruling elite. Here we publish a comment on this phenomenon by Lal Khan that was first published in the Pakistan Daily Times.

Yet another facade of a movement has been unleashed by sections of the state, imperialist interests and factions of the ruling classes to undermine and cut across a genuine revolutionary upheaval of the toiling masses from below. Billions not millions are being squandered on the so-called “long march” called by the right-wing demagogue Maulana Tahir ul Qadri.

The bourgeois media, pumped with colossal amounts of cash, is overwhelmed and an enormous campaign has been launched that has panicked the already shaky incumbent rulers in Lahore and Islamabad. Society is rife with conspiracy theories and wild speculations about the meteoric rise of this televangelist.

One theory doing the rounds in the commentators’ circles is rather intriguing, involving his Canadian citizenship and his links with the imperialists. Qadri’s connections are being linked to the Canadian gold mining giant Barrick Gold, the largest gold producing firm in the world, whose stakes in the Reko Diq gold mine in Baluchistan are in jeopardy due to the cancellation by the Supreme Court of a contract, signed in 1993 under another caretaker government. Imperialist plunder is one of the main causes of the revolt in Baluchistan and this strife has plunged the region into mayhem and conflagration.

Although there was a big crowd at the December 23 meeting of Maulana, the numbers have been deliberately and grossly exaggerated by the disciples of Qadri and the media. If anything, the gathering was small compared to the obscene amounts of money spent on promoting it, the arrangements made and the huge publicity campaign launched to haul the people to the venue. One can safely bet that this was the most expensive political rally in the history of the country. The jumping of the MQM onto Qadri’s bandwagon didn’t surprise anyone either. It is their characteristic ploy of running with the hare and hunting with the hounds. [Note: Muttahida Quami Movement, United National Movement, a reactionary, chauvinist party mainly based in Sind].

The attempts to compare Constitution Avenue in Islamabad with ‘Tahrir Square’ are also farfetched. The truth is that the prolonged sit-in at the Cairo square was not the decisive factor that deposed Mubarak. It was when the workers of the Suez Canal went on strike and the threat of the closure of this crucial waterway became imminent, along with the general strike of the Egyptian proletariat that pushed the despot out of power

There is another chimera here: that long marches lead to revolutions. Even in the Chinese revolution of 1949 capitalism was overthrown not by the long march of the mainly peasant red army but by the general strikes of the Chinese proletariat in Shanghai, Nanjing, Peking, Canton and other industrial heartlands of china. The workers of Karachi don’t have to march to Islamabad for a revolutionary insurrection. What they have to do is seize the factories and the economy to bring down the state. With a revolutionary party leading the working masses a general strike of the workers and peasants of Pakistan could achieve a socialist victory with relative ease and little bloodshed.

Mass mobilisations of millions or even tens of millions are not always of a revolutionary character. There can be huge rallies of the forces of counter-revolution, reaction and even fascism. After all fascist despots like Hitler, Mussolini, L. K. Advani and innumerable other reactionaries did mobilise millions to their rallies and movements.

The main difference between a revolutionary and a reactionary mobilisation is that in a revolution the masses enter the political arena on a voluntary basis with an honest and genuine quest to transform the system and change their destiny. In the case of the vanguard, of the proletariat there is a thorough understanding of the aims and objectives of the revolution that makes their participation a conscious act and a subjective element in the equation. Reactionary mobilisations are based upon mythological demagogues and attract rather primitive sections of society. Mostly these are a desperate expression of the social malaise, stagnation and despair that prevails in those moments in time.

If we are to seriously analyse the present situation and the mood of the masses in Pakistan, it is one which has been affected by betrayals and deceit by those in whom they had developed so many illusions. Their social and economic suffering has been exacerbated by the terrorist bloodshed of Islamic fundamentalists, imperialist aggression and plunder. Capitalist exploitation and coercion has never been so grave. The army and the judiciary, the political elite and the mullahs, the drug barons and the media bosses are knotted in an evil nexus that it is almost impossible to differentiate between them in this orgy of loot and plunder. The only thing that exudes from the elite is a callous social indifference. The MQM has been in power for more than two decades and Qadri is no novice to the establishment and the imposed political setup.

The prevalent conditions of the ruling political elite are analogous to what Karl Marx described about the nineteenth century French elite. He wrote, “The party of Order proved... that it neither knew how to rule nor to serve; neither how to live nor how to die; neither how to suffer the republic nor how to over throw it; neither how to uphold the Constitution nor how to throw it overboard.”

However, one is perplexed by Maulana’s contradictory and distractive programme and objectives. The crux of it is that he wants to change the system without changing it. Like everyone else in this moneyed politics he is an ardent supporter of the capitalist system that is the real cause of this misery, poverty, mayhem and deprivation. These charlatans evade the reality expressed in Lenin’s dictum, “politics is but concentrated economics.” Qadri accentuates politics but not economics, form and not the content, effect and not cause, mythology and not reality. He talks about the abolition of feudalism but not a word about the overthrow of capitalism. When in reality there are only remnants of feudalism in Pakistan and even in the remotest areas of the country there is a crushing domination of capitalist relations and exploitation.

Then there is the relentless din of revolution. Most of the right-wing politicians are chanting revolution when it is actually these preposterously rich parasites that the revolution has to target and expropriate their wealth. But the imperialists, the drugs cartels that lord it over two thirds of Pakistan’s economy – the informal or black economy – and the capitalist exploiters are Qadri’s main sponsors and backers.

It is a universal law that in periods of stagnations all kinds of rabble-rousers and peculiar phenomena keep on appearing suddenly and then rapidly vanishing into oblivion before a revolution of the workers and the oppressed masses breaks out. The fact is that Qadri and such reactionary characters are actually nurtured and created to confuse the masses, subvert and deprecate the revolution. The petit bourgeoisie as an instable class, with its erratic nature and whimsical, impatient temperament rushes to foist such chicanery. But sooner rather than later its delusions evaporate. Qadri has come and will fade away with the same rapidity. Nothing is going to change neither does he have any intentions, policies, programme, methodology, tactics or strategy to change.

However, the crisis is worsening with the convulsive downward spiral of capitalism. But real change has to come. It is a question of life and death for the teeming millions doomed by this cruel system into a living hell. They are yearning for an end to this pain and agony. Their time is not far off. The proletariat will transform from a class in itself to a class for itself. And once that takes place it will realise its power and move as a class with its gigantic strength into the arena of history to change its course. Only then will the system be changed, and that can only come about by overthrowing it through a socialist revolution.