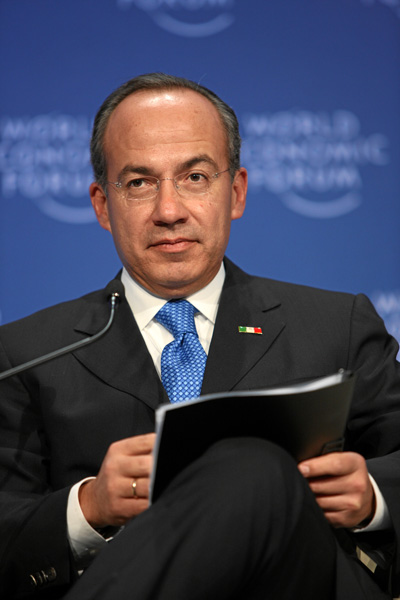 For Mexico, the world economic crisis has provoked a severe fall in Gross Domestic Product (GDP) of -10.3% in the second quarter alone - the worst on record since 1981. 36,000 companies have gone bankrupt and 735,000 workers have lost their jobs. Massive government spending cuts are further aggravating the situation.

For Mexico, the world economic crisis has meant a severe contraction of Gross Domestic Product (GDP) leading to a decrease of around 10.3% in the second quarter of the year - the worst on record since 1981. The perspective is bleak since the Ministry of Finance (SHCP) calculates that, at the end of 2009, GDP will have contracted by 5.5%. The OECD is more pessimistic and projects 8%. Between both extremes there are the calculations of the IMF (-7.2%) and that of the Central Mexican Bank (between -6.5% and -7.5%). Given these projections, it is impossible to deny that the memories of “the December errors” in 1994 and of the 1995 crisis (when the national economy dropped 7.8%) are more alive than ever before.

The effects of the current crisis include the bankruptcy of 36,000 companies and the sacking of 735,000 workers (this figure according to official figures, while other analysts speak of at least one million sackings), in addition to the “most severe financial shock in 30 years”, as Agustín Carstens, head of the SHCP (Ministry of Finance and Public Credit) said when referring to loss of 421 billion pesos (equal to 3.8% of GDP) in state income in the first six months of 2009. The perspective is that the financial gap will grow to the tune of 480 billion pesos by the end of the year. This situation has forced Calderón to cut public spending on two different occasions, the first in May (35 billion pesos), and the second in July (50 billion pesos).

The “most severe financial shock in 30 years” is the product of a 55.6% fall in foreign exchange earnings from oil exports: in the first semester of last year, state income from oil export was 24.4 billion dollars, but in the same period in 2009, this income had fallen to 10.6 billion dollars. On the other hand, the decrease in business activity has meant, between January and March alone, the loss of 56 billion pesos in ISR (income tax). In the case of VAT (Value Added Tax), due to the massive sackings and the reduction in consumption, the State lost 51 billion pesos.

The budget cuts adopted by the SHCP are already having serious effects; one of them has to do with municipal governments, 70% of which are on the verge of bankruptcy. Mayors are trying to deal with this situation by taking measures such as suspending payments and benefits for state employees, as well as sackings. This problem is precisely what caused the Tecuala (Nayarit) municipal workers to go on strike on August 19th. In general, federal resources transferred to states and municipalities have been cut by 13%.

Public agencies, such as the Ministry of Public Education (SEP), have also been affected with cuts of 7.2 billion pesos and cuts to public programmes such as the SCT’s (Ministry of Communications and Transport) rural roads programme which has seen 12.6 billion pesos slashed from its budget. Furthermore, on August 20th, Calderón announced the reduction of what he called “unnecessary bureaucracy” - in other words, the dismissal of hundreds or perhaps thousands of public employees.

But the drama is not over yet: according to the projections of the Ministry of Finance, the new gap in state finances is projected to be 300 billion pesos for 2010. What measures do Calderón and Carstens seek to implement to address this problem? While there is nothing formal in terms of a proposal to the chambers of deputies and senators, everything strongly indicates that public spending cuts will continue and that initiatives such as the elimination of subsidies for petrol and electricity will even be submitted to legislature. There is also talk of imposing taxes on street vendors and, given the repeated statements of employers, it cannot be ruled out that the regime intends to extend VAT to food and medicines.

Spending cuts mean the loss of jobs in the government and a smaller share of the latter in its social obligations in areas directly related to the poorest in society. The elimination of subsidies for electricity, approximately 450 billion pesos, although gradual, will raise the prices of fares which have risen by 54% from the time of Fox’s government to the present day. In the case of VAT on food and medicine, despite the fact that it is suggested it will start from a rate of 1% and then will gradually increase, it will have an impoverishing effect on millions of Mexicans. If there is a sector in which inflation is most rampant it is food, the price of which has risen 135% above general inflation in the first six months of the year. While general inflation rose over these months at a rate of 1.28% (reaching 5.7% in June), the price of food rose by 3.02%. The price of a basic food basket has risen 83% over the past two years while minimum wages have only risen 10%.

While all this is going on, Calderón has launched the “Vehicle Fleet Renewal Programme” in support of businesses at a cost of 500 million pesos; for its part, Nacional Financiera, as a part of the government anti-crisis plans, has announced that it has transferred almost 9.5 billion dollars to 20,953 businesses over the course of the year. The money assigned by Calderón to pay the state debt is 289 billion pesos. To make matters worse, the paradox of paradoxes, Calderón whines about the fall in government revenue while at the same time the government has different tax mechanisms that allow the SHCP to give millions back to business owners. For example, in 2008 alone large companies received about 206 billion pesos in tax refunds – this equals two-thirds of the 300 billion pesos that the state expects to lose in 2010, if measures such as VAT on food and medicines and the elimination of electricity subsidies etc., are not implemented!

But Calderón says nothing about all those expenses that benefit the bosses and bankers. The simple removal of tax benefits for big companies would solve many of the state’s financial problems, while the other part would be solved by cancelling the payment of public debt. Moreover, if more revenue is needed, why not get the money from those who have it, i.e. the various banks and financial groups established in Mexico which, despite the economic crisis, will have benefits that could reach about 18.72 billion pesos in the second quarter of this year alone, 70% more than the same period in 2008.

The only reason for the problems of state financing falling on the backs of workers is the fact that Calderón is a lackey of the bourgeoisie. We must oppose VAT on medicines and food, the cancellation of subsidies for electricity and the cuts in social expenditure, and instead we should fight for the cancellation of public debt (internal and external), the elimination of tax benefits for businesses, etc., so that all these resources can be used to cover the most urgent needs of working families in terms of health, education, housing, drainage, drinking water, electrification, subsidies and soft loans for poor farmers. 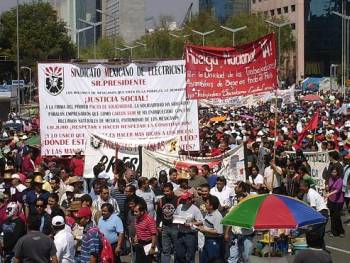 Electricity workers at the Luz y Fuerza del Centro are on strike at the moment, because the Mexican government announced the sacking of 44,000 workers. While the fight against Calderón's policy is an important step forward, it must at the same time get to the root of the problem. The state's fiscal crisis is nothing more than an expression of the crisis of capitalism. We cover the costs of the crisis on the one hand through the destruction of jobs, as well as wages cuts and the loss or workers’ rights, and on the other by increasing the state's economic burden on us – all to benefit the bourgeoisie. It's the same story as that of the oil crisis under López Portillo, the “December errors” under Zedillo and the long list of recurrent crises in Mexico and the world that seem to be endless. The only thing they have done is spread misery among millions of human beings. Thus, the fight against Calderón’s attacks must be linked to the struggle for socialism, so that the working class can take the monopoly over the main levers of the economy from those responsible for this and every crisis, the bosses and bankers, and place them under the democratic control of the workers. This is the only way to end the horror without end of capitalism, as Lenin called it.

The workers must fight for a United Front of the PRD, the trade unions and other militant organisations to promote a programme of demands with unified action such as general strikes in order to mobilise against Calderón's fiscal policy, against the sackings, for decent wages, for the overthrow of the regime, the expropriation of the bourgeois and for the establishment of a workers' state. Against capitalist anarchy, for a socialist planned economy. Fellow workers, join Militante and fight for these ideas!

(Originally published in Spanish on September 3, 2009)