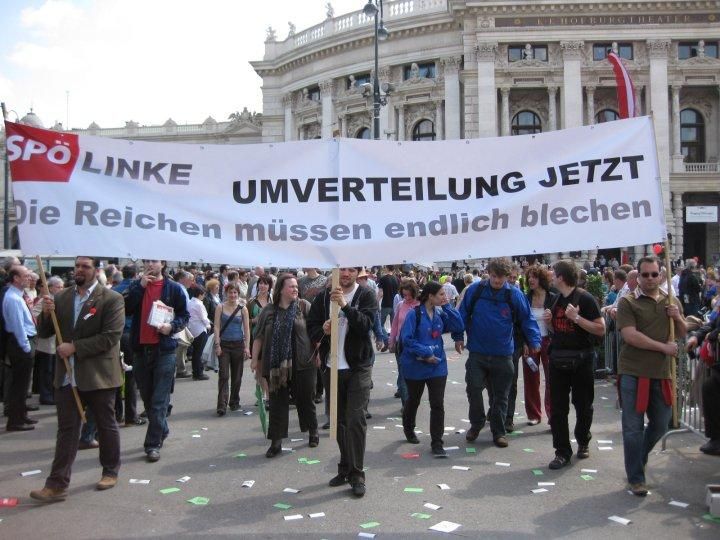 We provide a few reports from our comrades in several European countries, Greece, Austria, Sweden and Italy. In Sweden May Day coincided with the launch of the new Swedish Marxist journal, Avanti.

The May Day mobilisation was not so massive in Greece, as in previous occasions. Nonetheless, around 20,000 people attended the demonstrations in Athens and there were some smaller demonstrations in the other towns. The general mood was that of shock and rage against the new economic measures of the government. Most of the organised workers participated in the PAME rally and most of the unorganised workers and youth in the GSEE rally. The two rallies had a similar level of participation, but the PAME rally had a more fighting mood. We intervened in Athens, Komotini, and Thesaloniki, distributing around 160 copies of our newspaper. This year’s May Day was in fact overshadowed by the build up to the May 5 general strike, which we have already reported on.

120 years ago the Austrian working class celebrated May Day for the first time. Friedrich Engels congratulated the Austrian Social democrats that they had organised the best and most powerful May Day demonstrations in the whole of Europe. The repressive forces of the state apparatus had no chance to suppress the mass of workers who came out on that day!

Since then May Day has been a big tradition in the Austrian labour movement. Even 120 years later, and despite the deep crisis of Social democracy, tens of thousands participated in the May Day marches, rallies and events of the Social-democratic Party (SPÖ) all over the country. The biggest demonstration was in Vienna with blocs from all the districts, from several trade unions, etc.

This year the party leadership tried to react to the huge anger among the rank and file at the moderate policy of the SPÖ in government. The speeches were much more to the left then in the last years. Even party leader Werner Faymann saw the need to attack what he defined as the "scalpers" and clearly opposed the extreme right wing FPÖ which is trying to challenge the SP in the coming local elections in Vienna. But this was not enough to calm the rank and file. Especially in Upper Austria, the country’s industrial heartland, the regional party is calling for a policy of taxing the rich, because this is the only way to avoid further historical election defeats as we saw them in the last months in several occasions. A broad majority of the party rank and file wants a left-wing change of the party line.

Under these conditions the new left wing initiative "SPÖ Left" intervened in Vienna, Linz, Salzburg, Graz, Innsbruck, Schwechat, Wels, Mödling and in Vorarlberg distributing leaflets with an alternative programme on how to consolidate the budget deficit under the slogan "we will not pay for the bosses’ crisis!". These ideas attracted a lot of support from many left-wing social-democrats and trade unions activists. The supporters of the Marxist tendency "Der Funke" played an important role in these interventions. In all these May Day manifestations we sold more than 650 copies of our paper and we successfully collected donations to self-finance our Marxist weekend school which will take place from 21-24 May. In Vienna, Linz and Vorarlberg supporters then organised very well attended barbecues to celebrate these important interventions. 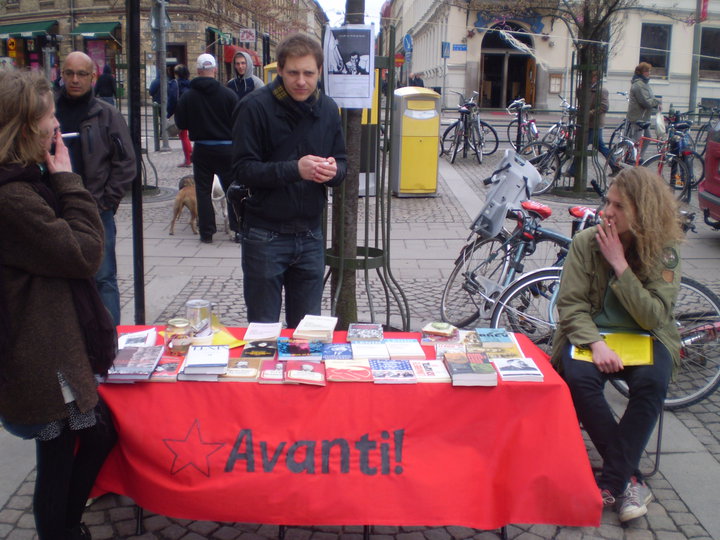 Swedish Marxists on a cold 1 May in Gothenburg. The Swedish IMT supporters launched a new paper on May Day. The name of the paper is Avanti and it is presented as a paper for the Marxist tendency within the left and the labour movement. It was sold in the demonstration in the three largest cities, Stockholm, Malmö and Gothenburg. Ten supporters sold 80 papers and most of the people who bought it were supporters or members of the Left Party, the Left Youth or Left Students. Their reaction was positive and it was clear that criticism already exists against the party leadership that has diluted its programme in order to join a coalition government with the Social Democrats and the Greens if they win this autumn's general election (which is the most likely outcome). In Gothenburg, where we have our strongest base, a sizeable number of youth came to our office after the demonstration, interested in discussing the situation in Sweden and the left movement.

This means that the Marxist tendency now has taken its first steps and we foresee that there will be good opportunities to raise the ideas of Marxism, first during the election campaign when many new members will join the Left movement, and then after the election when debate and criticism about the policy of the party will develop, tied to a trade union struggle to put pressure on the new government. The next paper will be produced in August and will be 12 or 16 pages and after that we will produce 6 issues annually to begin with. We have already bought a new printer so we will be able to print the paper and pamphlets ourselves.

In the last few years the May Day demonstrations in Italy have been losing importance. And as in countries like Brazil, the trade union leaders have shifted the emphasis to organising free rock concerts, rather than on mobilising the workers. Much more important is the 25th of April, the day of liberation from the Nazis in 1945, where mass demonstrations usually take place to commemorate the struggle of the Italian underground partisan movement that fought the Nazis in the latter part of the Second World War.

The tradition of May Day, however, remains in cities like Turin where 15,000 participated this year and supporters of FalceMartello sold around 30 copies of the paper. In Trieste, where May Day coincides with the liberation of the city by the Yugoslav army, there were 2000 present and we sold around 40 copies. The trade unions held their national demonstration in Rosarno this year, the town where in January there was a revolt of the immigrant labourers. Between 10 and 15 thousand people present and we sold 35 copies.